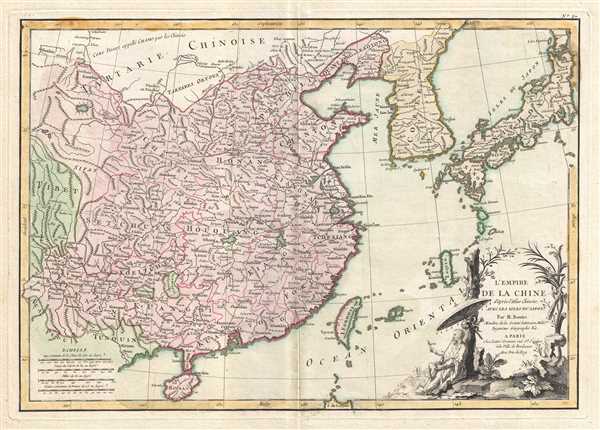 East Asia at the end of the 18th century, just prior to pan-Asian opening to European trade.
$450.00

A beautiful example of Rigobert Bonne's c. 1770 decorative map of China, Korea (Coree), Japan and Formosa (Taiwan). The map depicts from Tibet and Chinese Tartary to Japan and from Chinese Tartary and Korea to Hainan and Vietnam (Tunquin). China is divided into various provinces with major cities, lakes, and river ways notes. Macao, Canton, Nanking (Nanjing), Jedo (Tokyo), Peking (Beijing) and countless other cities are labeled throughout the map. An elaborate title cartouche showing a Chinese scholar or monk relaxing with a bird in a forest under a parasol decorates the lower left corner.

This map was drawn by Rigobert Bonne c. 1770 for issue in Jean Lattre's 1776 issue of the Atlas Moderne.