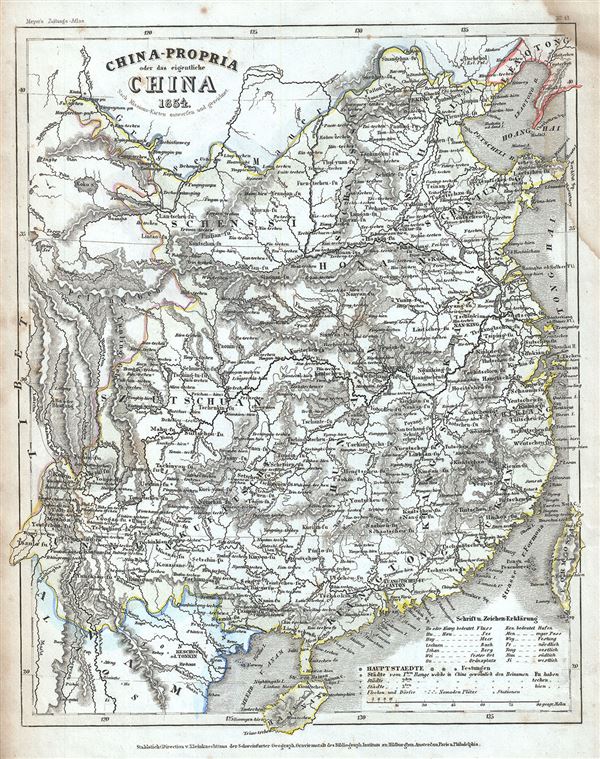 This is a lovely 1854 map of China by Joseph Meyer. It covers the traditional provinces of mainland China, as well as Formosa or Taiwan. The Grand Canal and the Great Wall are noted. Formosa or Taiwan is also included, though notably malformed, reflecting the primitive state of the regional survey prior to the Japanese invasion and subsequent survey work in 1895. Throughout, the map identifies various cities, towns, rivers and assortment of additional topographical details.

During this time in history, this region was dominated by China's last Imperial Dynasty, the Qing. In 1851, three years before this map was issued, the region dissolve into one of the bloodiest wars in human history, the Taiping Rebellion against the Qing, lasing from 1851 to 1862, and costing more than 20 million lives. Around the same time Second Opium War or the Arrow War, from 1856 to 1860, would result in China's concession of Tientsin and Hong Kong to the British.

This map was issued as plate no 43. in Meyer's Zeitung Atlas. Although all the maps in this atlas are not individually dated, the title page and maps were often updated while the imprint with the date was not, causing confusion to the exact date for some of the maps. Moreover some maps in the atlas were taped in at a later date as an update to the atlas. We have dated the maps in this collection to the best of our ability.