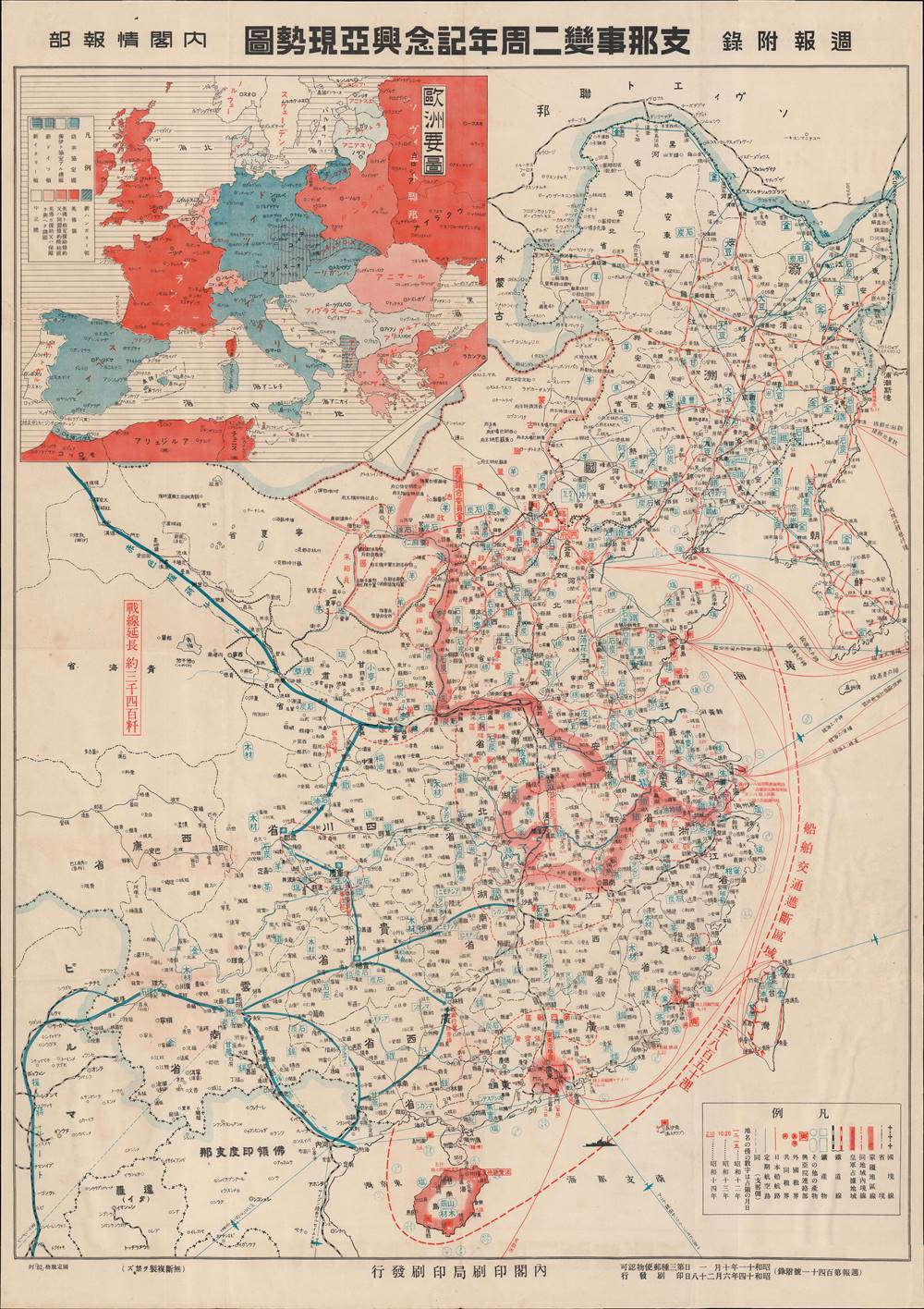 Boosting moral as the war in China drags on.

This is a rare 1939 propaganda map of China and Korea published by the Japanese government's Cabinet Intelligence Bureau (内閣情報部). It illustrates the state of war in China, known to historians as the Second Sino-Japanese War, a distinct theater of World War II. It was published as the war was sliding into a stalemate and was intended to boost morale on the home front.

The legend includes administrative borders, foreign concessions, air and sea routes, and railways, which were the arteries of Japan's empire. The extent of Mengjiang, a Japanese puppet state in Inner Mongolia, is shown with parallel red lines. Areas behind solid red lines are Japanese occupied, dashed red line circles are battlefronts with active fighting.

The locations of East Asia Development Board Liaison Offices (興亞院運絡部) are also indicated. This government agency was meant to focus on economic development and outreach among the local population, akin to the U.S. Agency for International Development and Japan's own extensive Official Development Assistance programs in the postwar era. However, in reality, the agency oversaw a vast system of slave labor and opium trafficking.

The location of resources throughout China are noted, including wood, coal, tin, tea, iron, salt, wheat, opium, and more. The length of the entire front line is given as 3,400 kilometers, along with a maritime interdiction zone (船舶交通遮斷區域) of 2,850 kilometers. The blue lines illustrate Chinese supply routes, highlighting the challenge Japan faced in isolating the Chinese government at Chongqing (重慶). The line emanating from Soviet Central Asia is labelled as 'Red support for Chiang' [Kai-Shek]) (赤色援蔣). Interestingly, the names of leading Chinese generals, but not Japanese commanders, are listed in the areas where their units operated, including Bai Chongxi (白崇禧), Yan Xishan (閻錫山), Zhu Shaoliang (朱紹良), Jiang Dingwen (蔣鼎文), Li Zongren (李宗仁), and Xue Yue (薛岳).

Numbers next to cities behind Japanese lines present their date of occupation, noted with traditional Chinese numbers, Arabic numerals, or underlined Arabic numerals to indicate the year in which they were captured. At top-left is an inset map of Europe showing the alliances and agreements between various powers that would contribute to the start of the war mere weeks after this map's publication.

The Second Sino-Japanese War was fought between the Republic of China, led by Chiang Kai-shek and the Guomindang (GMD, or Kuomintang KMT), and the Empire of Japan. Some scholars trace the beginning of the Second Sino-Japanese War to the Mukden Incident and the September 1931 Japanese invasion of Manchuria. In the following years, Japan established a puppet regime in Manchuria and extended its influence into northern China through several 'incidents,' to the extent that it directly or indirectly controlled much of northern China and Inner Mongolia by 1937.

Although determined to resist the Japanese, Chiang was eager to eliminate the domestic threat from the Communists first, while also buying time to modernize his armies and gain better control over his generals, most of whom were semi-independent warlords. These plans were disrupted when Chiang was kidnapped by one of his own generals in December 1936 and forced to enter a united front with the Communists and prepare for a full-scale war with Japan.

The July 7, 1937 Marco Polo Bridge Incident has traditionally been considered the start of the war, when Chinese and Japanese troops began exchanging fire at the Marco Polo Bridge (Lugouqiao), along a main access route to Beijing. This exchange of fire escalated to an all-out battle leading to Japanese forces capturing both Beijing and Tianjin. As the conflict expanded, Chiang aimed to deliver a knockout blow before Japanese reserves could be thrown into the fight. He launched an assault on Shanghai in the autumn of 1937, hoping to throw the Japanese garrison there into the sea, but was unable to completely drive them out. When Japanese reinforcements did arrive, they launched a counterattack that forced Chiang to retreat from Shanghai with heavy losses. After a cursory defense of the capital at Nanjing, Chiang moved deep into the Chinese interior to prepare for a protracted war of attrition.

After their rapid victories at the start of the war, by mid-1938 Japan was reaching an impasse. Years of military modernization and propaganda had laid the groundwork for the successful first phase of the war, but Japan simply lacked the resources and manpower to occupy the vast territory of China. It was hoped that further victories would convince Chiang to surrender, and so Japanese armies took city after city along the coast and down the Yangzi River, including Guangzhou and Chiang's temporary capital at Hankou, albeit at great cost. For its part, China had scored a surprise victory at the Battle of Tai'erzhuang in the spring of 1938, slowing Japan's advance, and engaged in grand-scale scorched earth tactics, most famously blowing up the dikes on the Yellow River, flooding thousands of kilometers of land, killing several hundred thousand civilians and Japanese troops, and restricting the possible paths of Japanese advance.

From the summer of 1938 through the spring of 1939, things became even worse for the Japanese. A series of offensives resulted in failure or pyrrhic victory, thanks to the effective leadership of Chinese generals like Li Zongren (李宗仁) and Xue Yue (薛岳). Although Japan succeeded in limiting and supplies coming to Chongqing from the south, via Haiphong, Guilin, and Kunming, international opinion had shifted strongly in China's favor. Japan's occupation of Tonkin the following year, undertaken with the same aim of limiting Chiang's supply lines, set the relationship with the U.S., U.K., and other Western powers down the course to confrontation that would result in outright war in late 1941. The Japanese also had to contend with constant guerrilla attacks from partisans with various allegiances, including the Communists (共產軍), shown here not at Yan'an (延安), their wartime headquarters, but behind Japanese lines. All in all, though information was heavily censored, the slowing advance of Japanese forces and mounting casualties led to hesitancy about the conflict, which had been advertised as a quick campaign to secure China's 'cooperation' in East Asia. This map was therefore meant to bolster flagging public support for a protracted war that was taking a heavy toll.

This map was published as an addendum to Issue No. 141 of the Weekly Report (週報) circulated by the Cabinet Intelligence Bureau (内閣情報部) on June 28, 1939 (Showa 14). It was printed and published by the Bureau itself. The map is held by the New York Public Library and Harvard University in the United States, and the National Diet Library and National Museum of Japanese History in Japan. It is very scarce to the market.

The Cabinet Intelligence Bureau (内閣情報部; 1936 - 1945), initially the Cabinet Intelligence Committee (内閣情報委員会) and later Cabinet Intelligence Ministry (内閣情報部), was a propaganda office designed to build support among the public for Japan's widening war in China and East Asia. It was headed by leading Japanese journalists and politicians, and its publications were quite popular within the highly restricted mediascape of wartime Japan. Its hundreds of publications helped to popularize strident militarism, for instance, promoting the idea of a Holy War for the Reconstruction of Asia (アジア再建の聖戦), to cite the name of a 1937 publication. Aside from distributing propaganda, the office also had censorship and information gathering duties. Learn More...