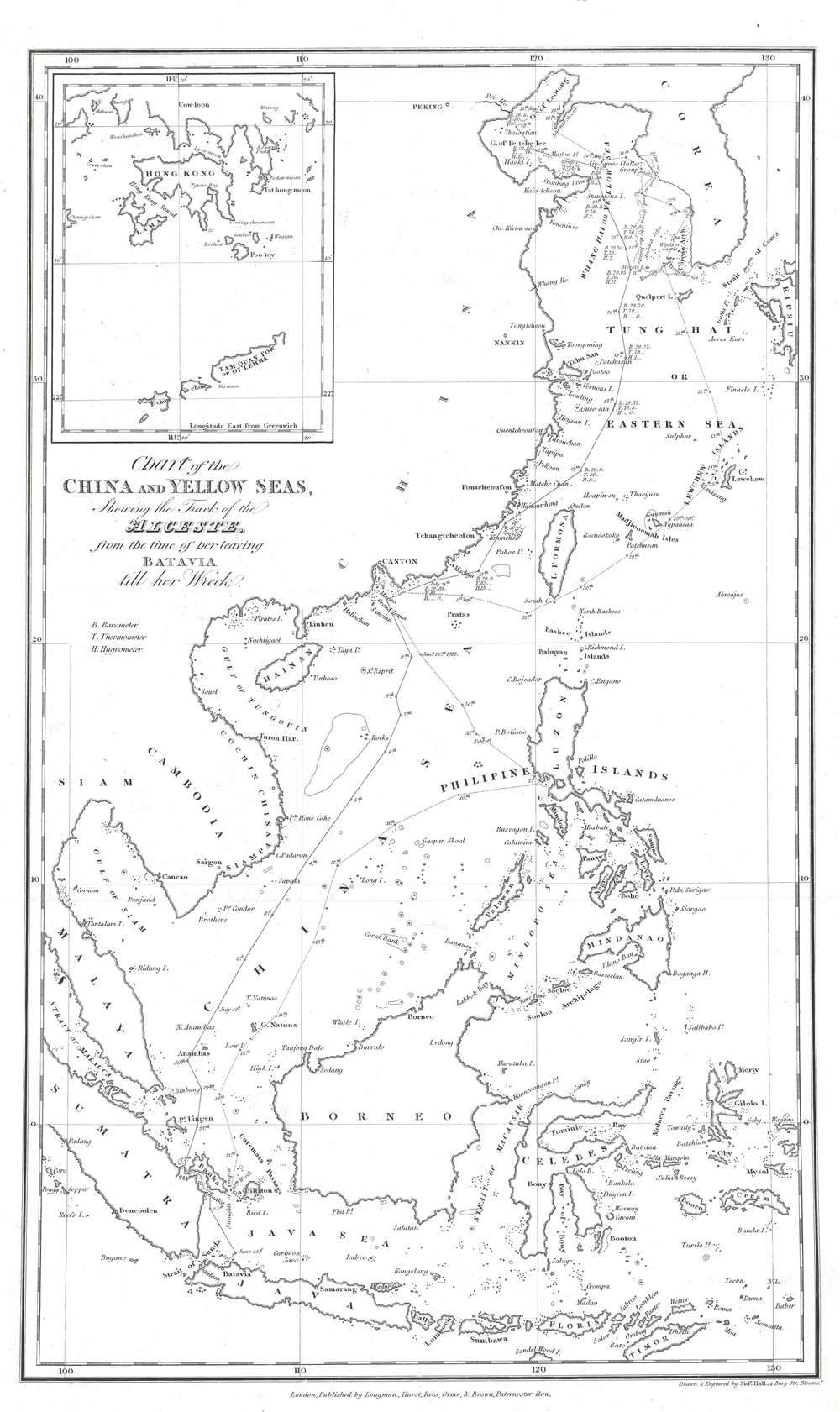 The explorations of the HMS Alceste in East Asia.
$400.00

This is an 1818 Sidney Hall map of East Asia tracing the route of the Alceste during its time in the region serving the Amherst Embassy. The map depicts the region from China to Kyushu (Kiusiu), one of the Japanese home islands, and from Liaodong Bay to Indonesia. Every coastline is illustrated in incredible detail, which appears in stark contrast to the completely blank inland areas. Major cities, such as Beijing (Pekin), Nanjing (Nankin), Guangzhou (Canton), and Saigon (Ho Chi Minh City), are identified. Many islands in the Philippines are labeled, including Luzon, Mindoro, Leyte, Samar, Mindanao, and Cebu (Zebu). Taiwan (Formosa), Malaya, Sumatra, Java, Borneo, Celebes, and Timor are also identified. An inset situated in the upper left corner focuses on Hong Kong and Kowloon.

The HMS Alceste began its career on the high seas as the French frigate Minerve, launched in 1805 during the Napoleonic Wars. A British fleet captured Minerve on September 25, 1806, and she arrived in Plymouth a month later. She was recommissioned as HMS Alceste in March 1807. Alceste served the British Navy through the rest of the Napoleonic Wars and participated in numerous engagements in the Mediterranean. Alceste was then decommissioned in late 1812 but brought back into service in 1814 as a troopship when she carried soldiers to North America to fight in the War of 1812.

The Alceste and the Amherst Embassy

William Pitt Amherst, 1st Earl Amherst (January 14, 1773 - March 13, 1857), the British emissary sent to China, specifically requested Alceste and her captain accompany him on his voyage to China. Once in the Far East, it was decided that Amherst and his entourage would meet the Alceste in Guangzhou, thus freeing the Alceste to explore the area before collecting her passengers. These explorations are traced on this map. Alceste and her crew made the most of their time. They first surveyed the Gulf of Liaodong (at that time virtually unknown in Europe), then continued to the Liaodong Peninsula, Jiaozhou Bay, and Korea's west coast. Alceste then turned south and spent six weeks at anchor off Okinawa. She weighed anchor and began the journey to pick up Amherst and the rest of his men at the beginning of September. Not knowing about the icy reception Amherst received, Maxwell, Alceste's captain, requested a berth to undertake repairs on Alceste. This, of course, was denied, and Alceste was fired upon by Guangzhou's coastal guns. Alceste returned fire and quickly destroyed the batteries and junks that sallied forth to meet her in an exchange of fire that history has dubbed 'a friendly interchange of salutes.' Amherst boarded Alceste on January 21, 1817, and they began their voyage back to Great Britain. On their way home Alceste ran aground on a hidden reef in the Java Sea. Captain Maxwell ordered Henry Parkyns Hoppner, his first lieutenant, to take Amherst and his party ashore in one of the lifeboats. Hoppner, Amherst, and the rest ended up rowing 200 miles to Batavia on Java because of inhospitable conditions near the wreckage. Once his party finally arrived in Batavia, Amherst sent a ship back to save the rest of the crew.

The British Crown sent William Pitt Amherst, 1st Earl Amherst (January 14, 1773 - March 13, 1857) as ambassador extraordinary to China's imperial court in 1816. Upon his arrival in China, he was met with some hostility and told that in order to be admitted to the Jiaqing Emperor's presence, it would be necessary for him to perform the kowtow (a reverential ritual done before the Chinese emperor in which one kneels and then bows so low that their forehead touches the floor). After receiving advice from the officials who accompanied him, Amherst refused to kowtow. He did offer one possible alternative, that an admission be made that the same reverence was owed to the British sovereign by Chinese when in their presence, just as Macartney had done in 1793. This stipulation was denied, and Amherst was refused entry into Beijing (Pekin), making his mission a failure. He and his party then set off south to Guangzhou (Canton) to sail back to Britain. This excursion overland was arranged before Amherst, and his party left the Alceste after arriving in China. After Amherst and his entourage boarded the Alceste in Guangzhou, she wrecked off Indonesia, and the survivors were finally rescued from Batavia. This second ship stopped at St. Helena, where Napoleon had been exiled, and Amherst met the exiled French emperor. Amherst finally arrived back in England in 1817.

Abel, C.Narrative of a journey in the interior of China (London: Longman, Hurst, Rees, Orme, and Brown) 1818.

Very good. Exhibits light wear along original fold lines. Verso repairs to fold separations in margins. Blank on verso.
Looking for a high-resolution scan of this?