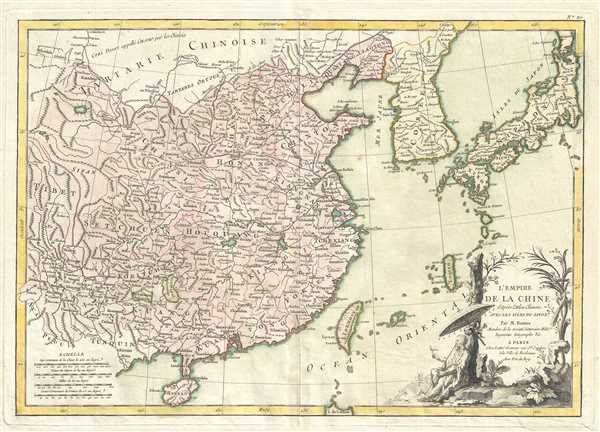 A lovely example of Rigobert Bonne's c.1783 decorative map of China, Korea (Corea), Japan and Formosa (Taiwan). The map extends from Tibet and Chinese Tartary east to Japan and south to Hainan. China is divided into various provinces with major cities, lakes, and riverways notes. Names Macao, Canton, Nanking (Nanjing), Jedo (Tokyo), Peking (Beijing) and countless other cities. The sea between Japan and Korea, whose name, either the 'Sea of Korea' or the 'Sea of Japan,' is currently a matter of historical and political dispute between the two countries, is here identified in favor of Japan.

The lower right quadrant is decorated with an elaborate title cartouche showing an Chinese scholar or monk relaxing with a bird in a forest under a parasol. Drawn by R. Bonne for issue as plate no. 35 in Jean Lattre's 1776 issue of the Atlas Moderne.