1832 Lapie Map of the Chinese Empire, Korea, and Japan 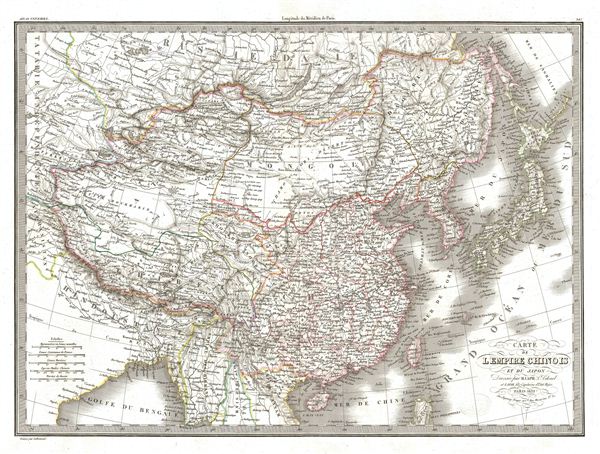 1832 Lapie Map of the Chinese Empire, Korea, and Japan

A fine first edition example of M. Lapie's 1832 map of the Chinese empire and Japan. The map covers all of China, Korea, and Japan from Asiatic Russia to India and the Sea of China and from Independent Tartary to the Pacific Ocean, just a few years prior to the Opium Wars. As this map was printed, the weakening Qing, China's last imperial dynasty, dominated the region. Following the Napoleonic Wars of 1815, trade between China and europe increased dramatically, leading to hostility between the Qing regime and the european governments. Increased demand for Chinese goods in europe and a distinct lack of interest in european goods in China led to a trade imbalance that began to deplete european raw materials. european merchants consequently introduced opium to china, ultimately leading to the Opium Wars of 1839.

This map was engraved by Armand Joseph Lallemand as plate no. 36 in the first edition of M. Lapie's important Atlas Universel. This map, like all maps from the Atlas Universel features an embossed stamp from the Lapie firm.