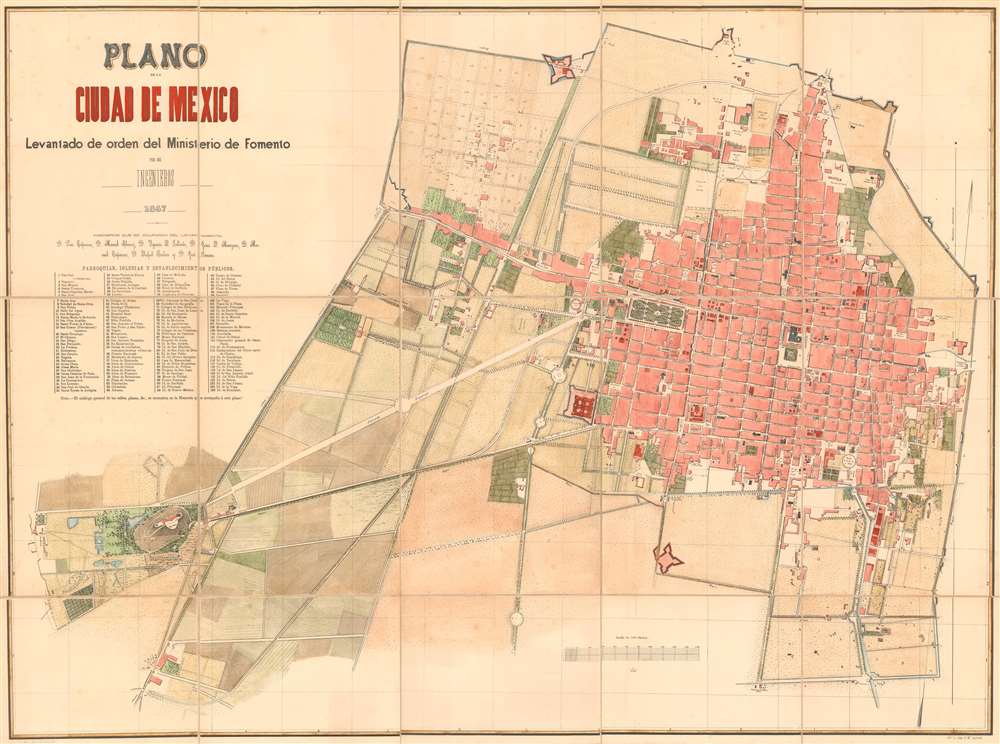 Published following the 1867 Republican siege of Mexico City, this E. M. Segredo and Ministerio de Fomento (Ministry of Development) city plan or map of Mexico City depicts the recaptured capital of the restored Republic of Mexico. Some 125 parishes, churches, and other public establishments are numerically labeled throughout and correspond to an index below title. Converge extends from the Chapultepec castle in the lower left quadrant, along the Calzada Imperial (present day Paseo de Reforma), to the historic center of Mexico City. Of note is the planned expansion in the northeast, what is today Colonia Santa María la Ribera. The Chapultepec Castle and grounds, now a beautiful public park, was the shortly before this map as made, the seat of the Emperor Maximilian I, of the Second Mexican Empire.

The Second French Intervention in Mexico

The Second French Intervention in Mexico, also known as the Second Franco-Mexican War, began in late 1861. French Emperor Napoleon III portrayed the military adventure as necessary to secure free trade, since the establishment of a friendly monarchy in Mexico would secure European access to markets in Latin America, provided a Catholic counterbalance in the hemisphere to the Protestant United States, and, of course, ensure French access to Mexican silver and henequen fiber. An armada of British, French, and Spanish ships arrived off the Mexican coast between December 8 and 17, 1861. The Spanish first seized San Juan de Ulúa and Veracruz. Meanwhile French captured Campeche on February 27, 1862, landing a French army arrived on March 5. By the late April, it became apparent that the French intended to conquer Mexico, leading to British and Spanish to fully withdraw, leaving Mexico to its fate. After roughly a year of fighting, Mexico City fell to the French on June 7, 1863. The following May, Napoleon III installed the Austrian Archduke Ferdinand Maximilian as Maximilian I, Emperor of Mexico. The French continued to suppress resistance Mexico throughout 1865. The tide turned in 1866, when Napoleon III, bowing American diplomatic pressure in the form of the Monroe Doctrine, withdrew French forces from Mexico. The Mexican Republicans began active resistance to Maximilian's French-bolstered regime in October, and over the course of 1867, retook Mexico. Republican forces laid siege to the Mexico City itself from April 12 - June 21, ultimately capturing Maximilian. The subsequent beheading of Maximilian ended the Second Mexican Empire and marked the end of European colonial power in North America.

This map is significant for its illustration of the planned devotement of Colonia Santa María la Ribera. Located in the Cuauhtémoc borough of Mexico City, just west of the historic center, Santa María la Ribera was created following the Second French Intervention for affluent Mexican's who wanted homes outside of the crowded city limits. The colonia reached its height between 1910 and 1930. In the 1930s, the middle class moved in and a new era of construction began leading to larger apartment complexes. It entered a period of decline in the 1950s and is today a middle- and lower-income area. Nonetheless, the modern colonia is a mix of historic mansions and homes, over 1,000 of which are historically registered, and is designed as a Barrio Mágico.

This 1867 map was drafted by a team of engineers employed by the Mexican Ministry of Development and printed in lithograph by E. M Segredo. The map is rare. The OCLC catalogues only one example, located at the British Library. We are aware of a further example at the Mapoteca Manuel Orozco y Berra in Mexico City.

Very good. Dissected and mounted on linen in 15 panels. Even overall toning. Blank on verso.