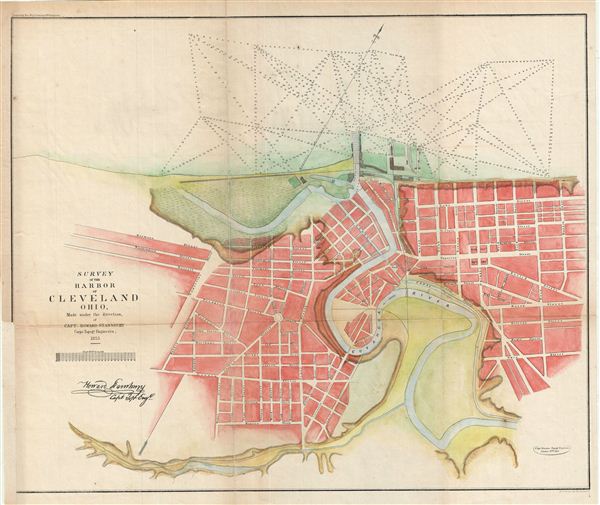 This is an uncommon example of the Howard Stansbury's 1853 topographical survey map of the Cleveland Harbor, Ohio. The map covers the city of Cleveland from Monroe Street (Monroe Ave) to Front Street (Front Ave) and shows soundings in feet. The Army Corps of Topographical engineers engaged Stansbury to complete this survey in anticipation of improvements to Cleveland harbor. This map was created under the direction of Capt. Howard Stansbury and engraved by Ackerman in 1855.

Army Corps of Topographical Engineers (fl.1838 - 1863) refers to the an elite branch of the U.S. Army created on July 4, 1838 to perform civil mapping and survey work throughout the United States. The origins of the Corps of Topographical Engineers can be traced back to the American Revolutionary War, where General George Washington recognized the need for accurate surveys pursuant to military action. Shortly following the war, in 1779, a civilian engineering corps was created by act of Congress. Identified in 1802 by Thomas Jefferson, the "Corps of Engineers," which was based at West Point, the group participated in the War of 1812 and in later in the fortification of New Orleans. It was not until 1838, however, that a separate group of "Topographical Engineers" was formally recognized. This elite group, consisting only of officers, most of whom were trained in surveying and engineering by the esteemed Andrew Ellicott at West Point, never numbered more than 36 individuals - the best and brightest. This small but determined group played a central role in the mapping and exploration of the American West. Few branches of the military can boast such a distinguished alumni. Their names resonate throughout the map of the west and include John Charles Fremont, Zebulon Pike, George Meade, Kemble Warren, William Amiel Weeks, A. B. Gray, Randolph B. Marcy, James H. Simpson, Howard Stansbury, John W. Gunnison, William Ludlow, and Robert S. Williamson. The onset of the American Civil War brought an abrupt end to the surveying activity of the Topographical Engineers. Many of the most prominent engineers went on to distinguished military careers on both sides of the War Between the States. The Army Corps of Topographical Engineers itself was folded into the Corps of Engineers on March 31, 1863. Though the Army Corps of Engineers continues to do military and civil survey work to this day, the elite club of adventures that formed the Topographical Engineers were no more.


Howard Stansbury (February 8, 1806 - April 13, 1863) was an important surveyor, cartographer, and explorer who did his most important work in Utah during the middle part of the 19th century. Born in New York City, Stansbury trained to be a Civil Engineer. Shorty after getting married to Helen Moody of Detroit in 1827, Stansbury took a position with the United States Topographical Bureau. Under that organization he surveyed the James River in 1836, and the Illinois and Kaskaskia Rivers in 1837. In 1838, he oversaw the construction of a road from Milwaukee to the Mississippi River. Later in 1838, when the U.S Corps of Topographical Engineers was created, he joined as a first Lieutenant. With the Topographical Engineers he surveyed the Great Lakes, the harbor of Portsmouth, New Hampshire, and constructed Florida's Carysfort Reef Lighthouse. During the Mexican-American War he constructed fortification in the Dry Tortugas at the westernmost point on the Florida Keys. Upon achieving the rank of Captain, Stansbury received a commissioned to head a survey of the Great Basin that would ultimately become the crowning achievement of his career. His assignment was to survey the emigrant trails to California, including the Oregon Trail, as well as the Great Salt Lake, and report on the status of the growing Mormon Community in Salt Lake City. Working with J. W. Gunnison and Alfred Carrington, a Mormon scout, Stansbury produced a masterful survey of the region that had a lasting effect not only on the development of the Great Basin, but on the development of the west in general. Upon completion of his survey, Stansbury set out on the road to Washington, completing another important survey in the process. On the way, he fell off his horse, taking an injury from which he never fully recovered. Following the presentation of his report to Congress, Stansbury was charged with additional survey work around the Great Lakes. Upon the outbreak of the American Civil War, he was assigned to recruitment duties in Ohio and later Wisconsin. Shortly after starting work at this post he suffered an abrupt heart attack and passed away. He is buried in St. Paul, Minnesota.