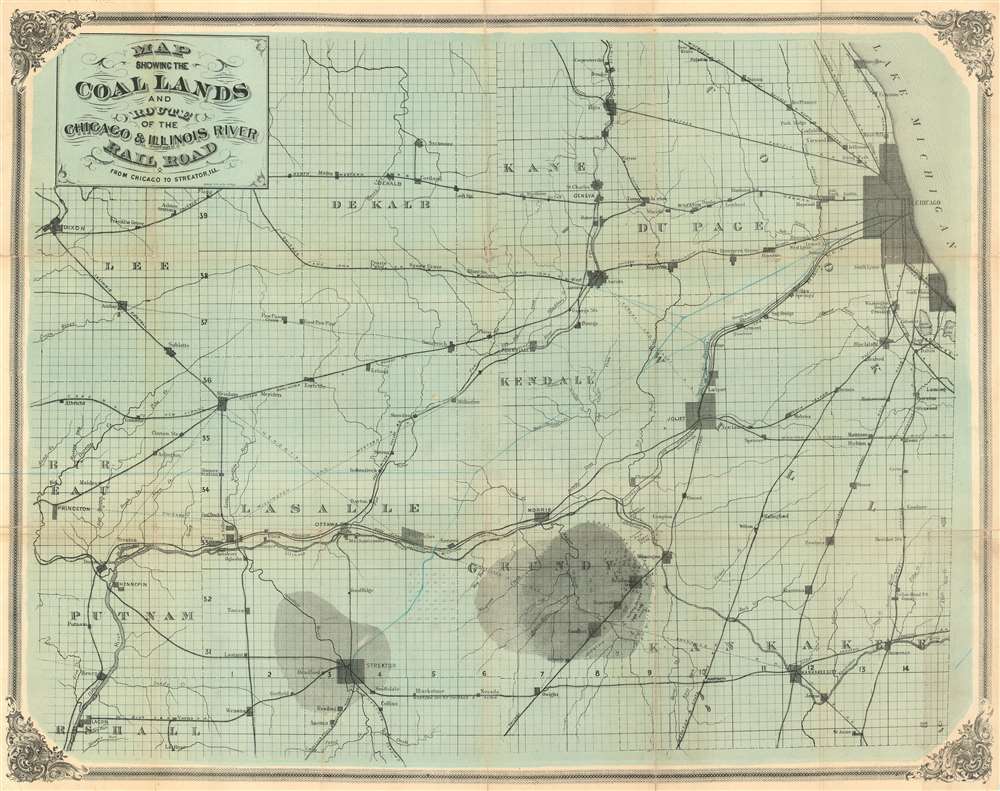 A most unusual and mysterious map. The c. 1870 map illustrates railroads and coal fields the northeastern part of Illinois. Coverage extends from Chicago and Lake Michigan westward to the towns of Henry and Lacon, and south as far as Ancona, Reading, and St. Anne. Multiple rail lines are illustrated in detail and coal fiends in the vicinity of Grundy and Streator are highlighted with shading.

The map secondary purpose, according to the title, is to illustrate the Chicago and Illinois River Rail Road leads to a mystery, as that railroad is not specifically identified on the map! Instead, the projected route of the railroad road is illustrated in blue pencil, leaving Chicago, with branches leading to Joliet and Streator, and a main line heading westward thorough Homer Station.

Coal was discovered in northeastern Illinois, just southwest of Chicago, in the early 19th century. The area was only tenuously mined until the 1860s and 1870s, when the growth of the American railroad system created a high demand for quality coal and spurred more intense efforts. Most of the mines played out in the late 19th and early 20h centuries, but a few remain active to this day. This map highlights roughly 76 numbered mines in the Grundy / Coal City (founded 1881, this not present here) region, particularly around Braidwood and Wilmington. The numerical system suggests that this map was once accompanied by a booklet or pamphlet, which has long since been lost.

The Illinois General Assembly chartered the Chicago and Illinois River Railroad on February 28, 1867 to build a railroad from Chicago through Lisbon and Ottawa (the latter on the Illinois River) to the Mississippi River opposite Keokuk, Iowa, with a branch extending to the coal fields near Streator. On March 24, 1869, the General Assembly removed the requirement to serve Lisbon and Ottawa. Construction began in 1873, but in 1875 it ran out of money and leased the unfinished line to the Chicago and Alton Railroad.

The map is undated, but we believe it to have been issued sometime between 1869 and 1872, before the rail line was completed. The printer, Chicago based Garden City Lithographic Press, went out of business in 1872 and the railroad itself ceased to operate in 1875. Given that the proposed railroad route is on this map only in manuscript, we surmise that this map may have been part of an investor prospectus published in only limited or even proof states. The only other known example is held in the collections of the University of Chicago.

Garden City Lithographic Press (c. 1869 - 1872) was a Chicago based printing concern active in the second half of the 19th century. The firm was founded by L. R. Bromley and J. O. Linkletter. In December of 1872, Linkletter left the business, and Bromley took on all assets. Bromley also took on a new partner, W. B. Shaut, renaming the firm 'Garden City Chromo-Lithographic Press.' Bromley and Linkletter continued to share offices at 76 Madison Street, Chicago, and are listed both jointly as 'Bromley and Linkletter' and separately in the 1873 supplement to Edward's Directory. Learn More...