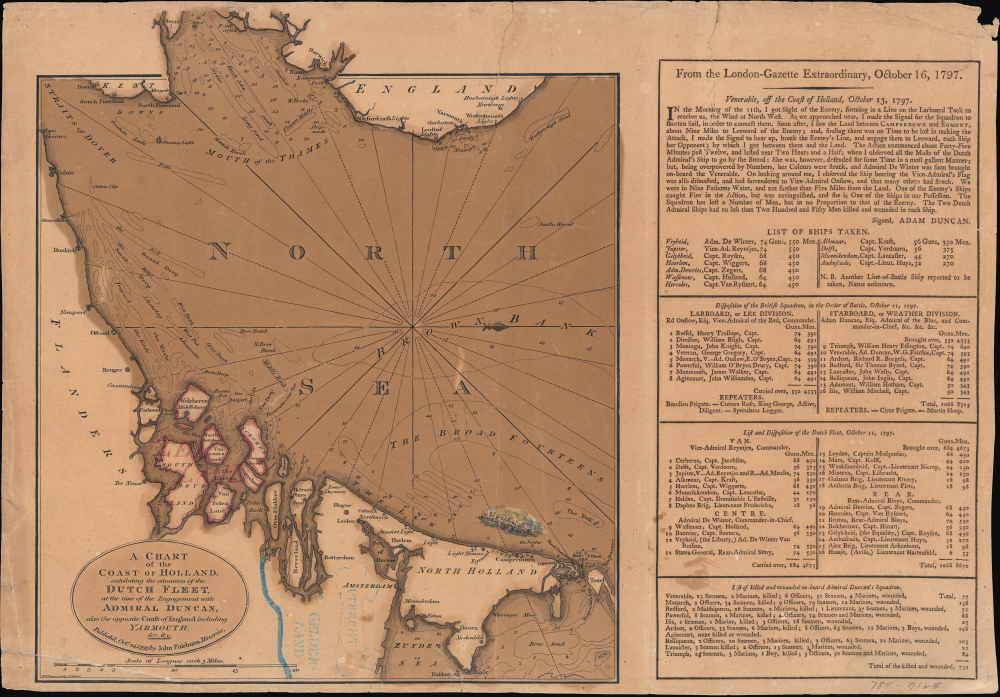 An ephemeral 1797 John Fairburn broadside map celebrating the British naval victory at the 1797 Battle of Camperdown during the French Revolutionary Wars (1792 - 1802), one of the most significant naval engagements of the era.

This chart is oriented with west at top and north at right, depicting a portion of the North Sea between Holland and England. Soundings are provided throughout, along with indications of sand banks, lights, hazards, and anchorages. Towns, cities, ports, and lighthouses are noted on land. The Dutch provinces of Utrecht, Gelderland, and Zealand are outlined in hand-color. A small illustration denotes the site of the Battle of Camperdown. At right, blocks of text discuss the battle, including a description from the British commander Adam Duncan, lists of ships and men captured, the order of battle, and the number of British casualties sustained.

The Battle of Camperdown (Zeeslag bij Kamperduin) was fought on October 11, 1797, between the British North Sea Fleet under Adam Duncan and a Dutch (Batavian) force under the command of Jan de Winters. Having blockaded the Dutch fleet for a month beforehand, Duncan returned to Yarmouth (at top, now Great Yarmouth) for supplies, prompting Winters to raid British ships in the North Sea. Doing so provided an opportunity to ambush the Dutch fleet off the coast of Camperdown (towards bottom-right) and capture eleven ships, including Winters' flagship, the Vryheid, with reciprocal losses.

The victory was resounding and hailed at the time as one of the greatest in the history of naval warfare, though it has been largely forgotten in the wake of Trafalgar. Camperdown led to an upsurge of British patriotism and the publication of celebratory broadsides, as here, along with paintings, songs, and accounts of the battle. In the long term, it helped secure Britain from any potential French invasion and guaranteed British naval superiority in the North Sea and English Channel. In 1799, this allowed Britain and Russia to launch an amphibious raid on Holland, destroying what remained of the Dutch fleet and crippling the French-aligned Batavian Republic.

This map was produced during the French Revolutionary Wars, soon after the collapse of the First Coalition. Though the tone is triumphant, this point in the conflict was difficult for Britain, as French armies, including those led by Napoleon Bonaparte, defeated one opponent after another in continental land battles. As evidenced here, Britain's superior navy was its main advantage against the French military juggernaut.

As for the Netherlands, they had been progressively occupied by France in the preceding years, and Holland was seized rapidly with a surprise winter offensive in early 1795. The Dutch Republic was abolished and replaced with a Batavian Republic, which removed much of the old federal structure of the semi-independent republics. A democratic constitution was written with popular support, enshrining the ideals of the revolutionary age. However, as elsewhere in French-occupied territory, the idealism of the era was sullied by military occupation and a turn towards authoritarianism, resulting eventually in Louis Napoleon, brother of the general-emperor, being appointed ruler of Holland.

This map was engraved by W.T. Davis (about whom no information is available) and published by John Fairburn in London on October 24, 1797. It is only cataloged among the holdings of the Library of Congress and has no known history on the market.

John Fairburn (fl. c. 1782 - 1851) was a British printer and publisher based in London that specialized in works dealing with history, current events, and politics, including maps, broadsides, and caricatures. Founded by John Fairburn, Sr., the firm was later passed on to his son John Fairburn, Jr. They were known for inexpensive 'sixpenny chapbooks' that were colorful and lurid, intended for the masses rather than the elite. Collectively, these works reflected the Fairburns' liberal values, including equality of the sexes, fair treatment for servants and workers, and abolitionism. Learn More...