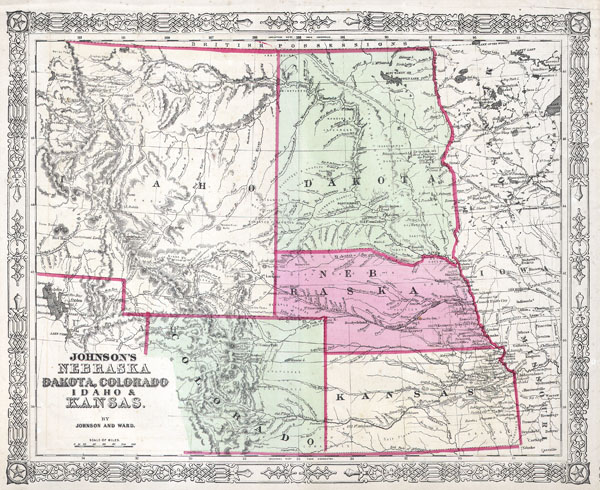 This is a beautifully hand colored 1863 lithograph map of what today consists of the states of Idaho, Wyoming, Colorado, Montana, North Dakota, South Dakota, Nebraska and Kansas. Extends west as far as the Great Salt Lake and east to Lake Superior. Large Idaho Territory predates the creation of Wyoming and Montana. The newly created territory of Colorado (1861) appears in the lower left. Crisscrossed throughout with wagon trails, explorer's routes, railroads, and proposed railroads. Also offers superb detail regarding the deportment of area American Indian tribes and settlements. An important phase of the Johnson Mountain States map series. Cartographically this map is based upon the earlier work of J. H. Colton. Page no. 63 in the 1863 edition of Johnson's Family Atlas.

Very good. Verso repairs on a couple of closed tears, mostly confined to margins. One closed and repaired tear extends into the map through what is today Colorado, near the “r”. Not visible in photo. Else clean.