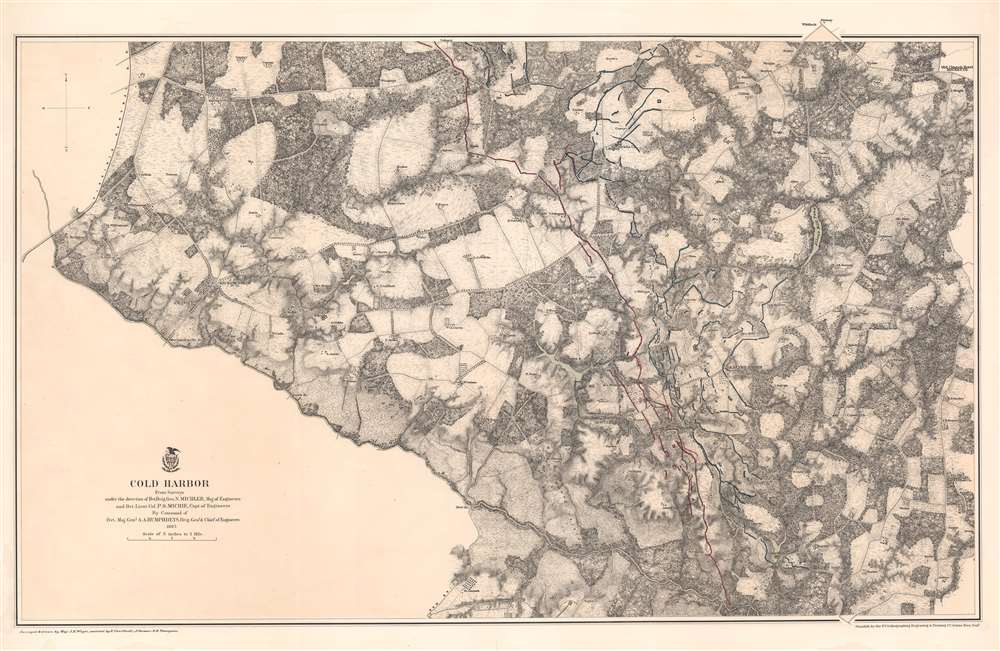 This is an 1867 John Weyss and Nathaniel Michler map of the battlefield of Cold Harbor, Virginia. The map depicts from the Virginia Central Railroad to Emanuel Church and Black Creek Church and from the Linney Farm to the Taylor Farm. The last battle of Union Lieutenant General Ulysses S. Grant's Overland Campaign, the Battle of Cold Harbor was a lopsided victory for General Robert E. Lee and the Confederacy, but it would prove to be his last. Grant had achieved the goal of the Overland Campaign and forced Lee into defending Richmond, the capital of the Confederacy, and Petersburg behind a network of trenches and other fortifications. Soon after the Battle of Cold Harbor, the Richmond-Petersburg Campaign, more popularly known as the Siege of Petersburg, began. This campaign was a nine-month saga of trench warfare and small battles, culminating in the capture of Petersburg and the evacuation of Richmond by the Confederate government.

The Battle of Cold Harbor

The Battle of Cold Harbor, which took place only ten miles from Richmond, is remembered as one of the bloodiest, most lopsided battles in American history. General Grant and the Union Army were trying to seize control of the crossroads at Cold Harbor, Virginia, which would have given them access to Richmond. After the initial success of the Union cavalry, Grant sent numerous infantry assaults against well entrenched Confederate lines. Lee's forces held off attacks by the numerically superior Federal army and inflicted egregious casualties, with some estimates calculating nearly 13,000 Union casualties compared with just over 5,000 Confederate losses. In his memoirs, General Grant stated that he had 'always regretted that the last assault at Cold Harbor was ever made…No advantage whatever was gained to compensate for the heavy loss we sustained.'

This map was surveyed and drawn by Major John E. Weyss under the command of Nathaniel Michler, engraved by Julius Bien, and published by the War Department in Military Maps illustrating the Operations of the Armies of the Potomac and James in 1869. While this map is well represented in institutional collections, it is rare to the private market.


Andrew Atkinson Humphreys (November 2, 1810 - December 27, 1883) was a career U.S. Army officer. Born in Philadelphia, Pennsylvania, Humphreys came from an illustrious family. His grandfather is remembered as the 'Father of the American Navy', because he served as the chief naval constructor from 1794 - 1801, and designed the first U.S. warships, including the USS Constitution. Samuel Humphreys, Andrew's father, designed the USS Pennsylvania, the largest and most heavily armed ship at the time. Humphreys graduated from Nazareth Hall (modern day Moravian College and Theological Seminary), then entered the United States Military Academy at West Point. Humphreys graduated on July 1, 1831, was commissioned as a second lieutenant, and joined the Second Artillery Regiment. in South Carolina. In the summer of 1836, Humphreys and his regiment went to Florida to fight in the Seminole Wars. Disgusted by the the war's mismanagement, Humphreys resigned his commission on September 30, 1836, and became a civil engineer. Nearly two years later, on July 7, 1838, Humphreys rejoined the U.S. Army as a 1st lieutenant in the Corps of Topographical Engineers. Humphreys began an extensive survey of the Mississippi River Delta in 1850, a project that lasted ten years. He also worked on the Pacific Railroad Surveys from 1853 - 1857. During these years just before the American Civil War, Humphreys earned a glowing reputation as a scientist both nationally and abroad. Humphreys was promoted to major at the beginning of the American Civil War and became the Army of the Potomac's chief topographical engineer. During the war, Humphreys fought beside McClellan during the Peninsula Campaign, when he was prmoted to brigadier general, given command of a division, and saw combat at the Battle of Antietam, the Battle of Fredericksburg, and the battle of Chancellorsville. He was transferred to a different division just before the Battle of Gettysburg, where, because of poor command decisions by his immediate superior, his division was annihilated. Humphreys was promoted to major general after the Battle of Gettysburg and consented to becoming General Meade's chief of staff, a position he had been offered in the days before Gettysburg. He served in this position until November 1864, when he was given command of the II Corps during the Siege of Petersburg. He held this command until the end of the war and his corps played a part in the Appomattox Campaign. After the war, Humphreys became Chief of Engineers in 1866, a position he held until he retired on June 30, 1879. Learn More...