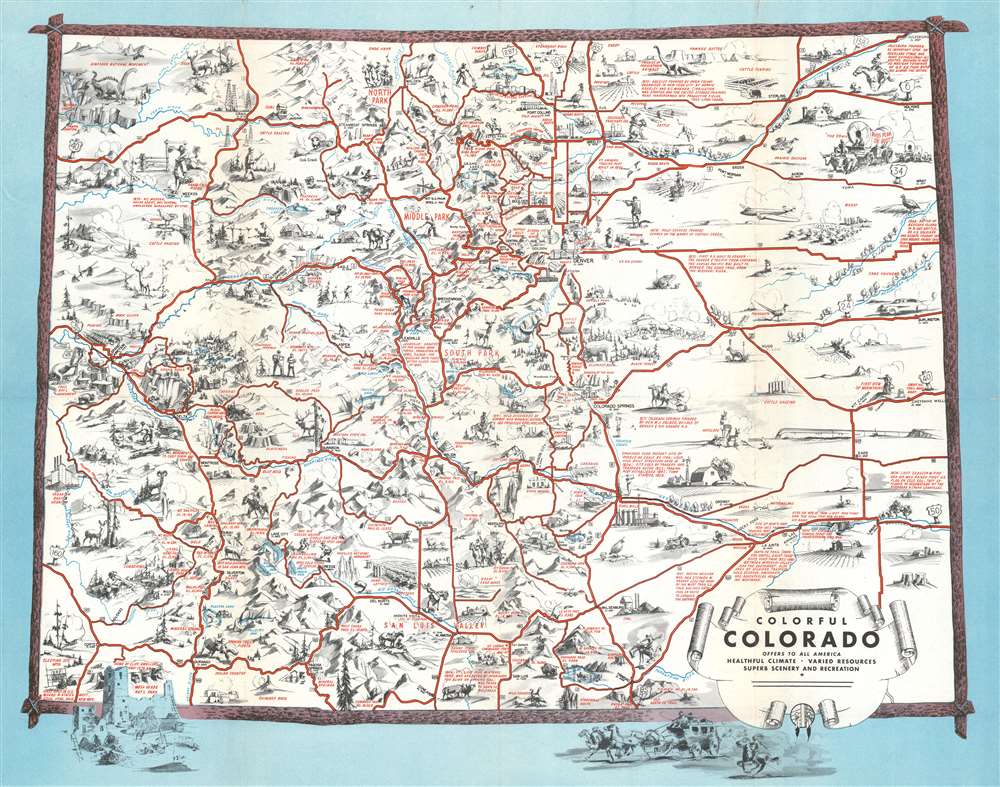 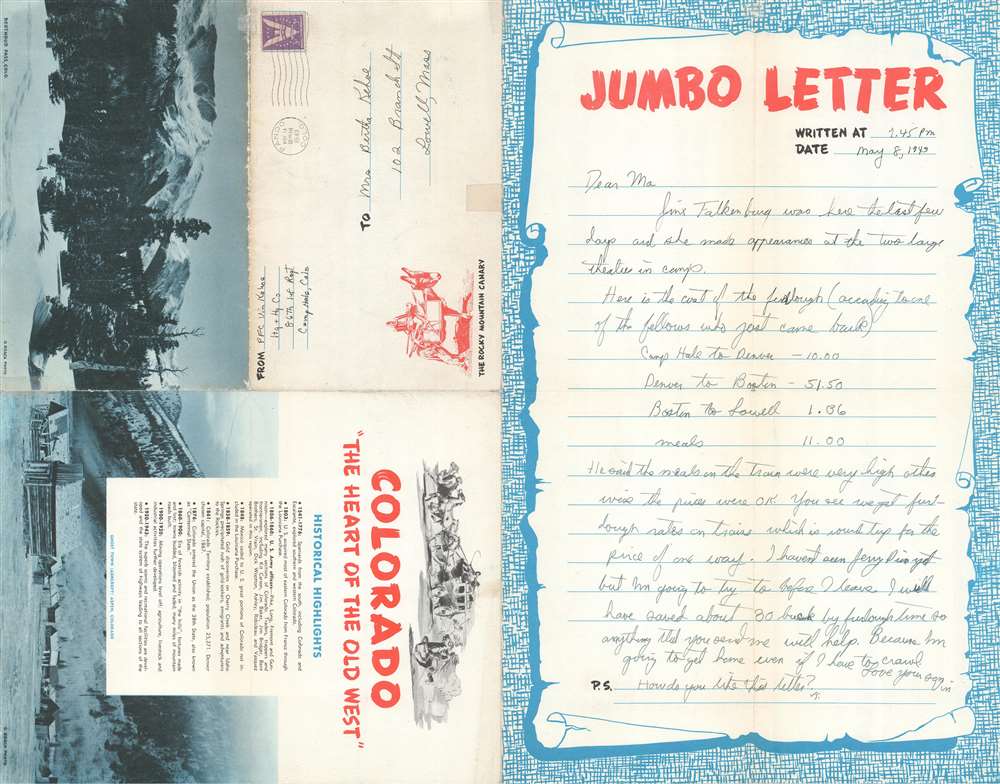 Includes a manuscript letter written home to his mother by a soldier in training in Colorado in 1943.
$450.00

This is a unique 1943 Ray Schmidt pictorial map of Colorado bearing a letter home from a soldier training to fight in World War II on the verso. h6>The Map ItselfBeautifully and intricately illustrated myriad small vignettes populate the entire state. Cities and towns are labeled, including Denver (complete with an illustration of the state capitol building), Colorado Springs, Pueblo, Durango, and Grand Junction. Since the Rocky Mountains divide the state in two, numerous peaks and mountain passes are noted, and their names and elevations are provided. A charming illustration of Cliff House at Mesa Verde National Park adorns the lower-left corner, while a large sauropod marks Dinosaur National Monument on the upper left. Colorado wildlife, including bighorn sheep, deer, elk, beaver, and pheasant, add yet another level of charm to this lovely piece. Schmidt also expertly blends the old with the new, juxtaposing army airfields, planes, futuristic trains, and cars, with cowboys, prospectors, and rodeos. Colorado's wild west heritage is also evoked through the inclusion of covered wagons and a stagecoach. The whole is surrounded by a frame that evokes the imagery of a stretcher used for drying animal hides, completing the aesthetic.

The letter was written by Private First Class Vin Kehoe on May 8, 1943, at Camp Halo, Colorado, to his mother, Bertha Kehoe, at home in Massachusetts, on a 'Jumbo Letter' printed on the map's verso. The letter reads

Jinx Falkenburg was here the last few days and she made appearances at the two large theatres in camp. Here is the cost of the furlough (according to one of the fellows who just came back)
Camp Halo to Denver - 10.00
Denver to Boston - 51.50
Boston to Lowell - 1.36
meals - 11.00
He said the meals on the train were very high otherwise the prices were OK. You see we get furlough rates on trains which is roundtrip for the price of one way. I haven't seen Jerry Prin yet but I'm going to try to before I leave. I will have saved about 30 buck by furlough time so anything that you send me will help. Because I'm going to get home even if I have to crawl. Love your son, Vin. P.S. How do you like this letter?

This map was created by Ray Schmidt and published in 1943. A previous edition was published by the Bradford-Robinson Printing Company for the Colorado State Highway Department in 1941 and a subsequent edition appeared in 1946. This is the only known surviving example of the present edition.