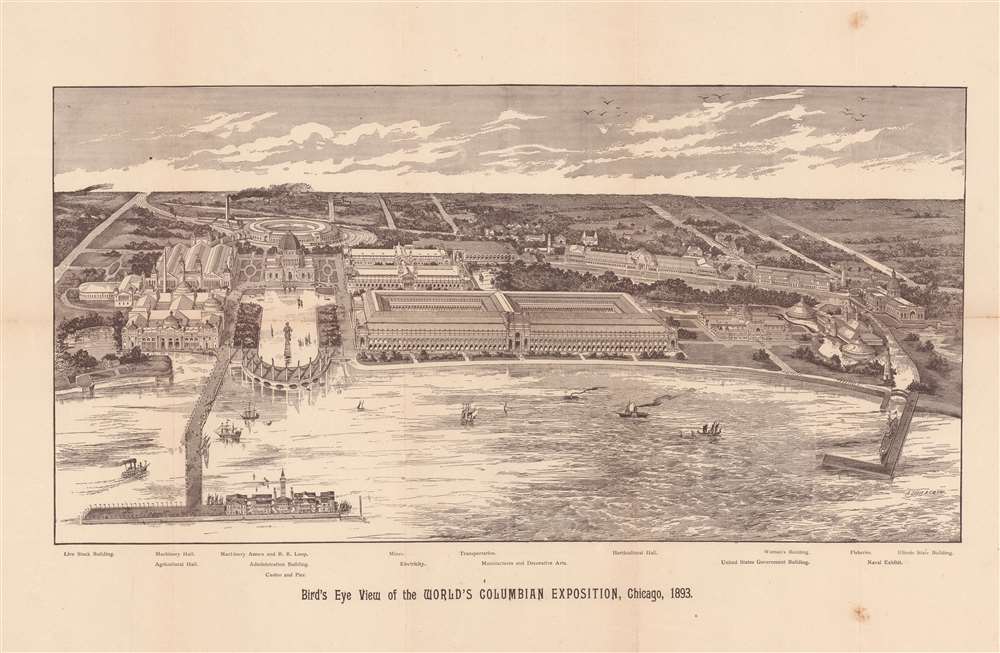 This is a delicately executed, wood-engraved Alexander Zeese bird’s-eye view map of Chicago, Illinois, promoting the 1893 World's Fair, known as the Columbian Exposition of 1893. The view depicts the Exposition’s buildings with Jackson Park in the foreground along the shore of Lake Michigan with the rest of the city in the background.

Features of the Exposition are labeled along the bottom to highlight prime attractions: halls dedicated to advances in animal husbandry, mining, transportation and government. The 'electricity' exhibit was of particular importance, as the Chicago Exposition was the first fully electrified global exposition. Another notable attraction was the Naval Exhibit, a warship is moored at a pier at the far right - see below.

The view is a celebration of the architectural designs of architect Daniel Burnham. His neoclassical structures, with white faux-stone facades, were known as the White City, and also called the 'Dream City,' to reflect on the utopian optimism it was meant to evoke. A first-hand account of the opening day captures the exhibition's spirit:

Near the center of the view, at one of the northern piers of the fair, is a warship. The United States Navy intended, among the wonders displayed at the Exposition, to showcase its steel-hulled, electric-lit battleships. This posed two problems: First, treaties with Canada forbade warships of either nation to operate on the Great Lakes. Second - before the 1900 opening of the Sanitary and Ship Canal - the draft of a steel-hulled warship would be unable to enter or leave the lake. The solution - itself, arguably a quintessentially American scheme - was to fabricate a full-scale battleship - dubbed the Illinois - to show off the Navy’s new technologies. This 'ship' was designed by architect Frank W. Grogan. Built on pilings, above the waterline the ship sported brick sides plastered with cement to simulate a steel hull. Actual coal-fired generators powered the Illinois' electrically-driven turrets, her interior lighting, and her powerful searchlights. She had a skeleton Navy crew made up of officers and sailors.

This view was created and published by A. Zeese and Company in 1893. An example is cataloged in OCLC and is part of the institutional collection at the Bibliothèque et Archives nationales du Québec. It is scarce on the private market.

Alexander Zeese (1827 - January 10, 1898) was an German photo lithography, engraving, and electrotype founder based in Chicago, Illinois, around the turn of the century. Zeese was born in Bautzen, Germany where he was educated and apprenticed as a printer. He immigrated to the United States in 1853. Working at a printing office in New York City Zeese mastered the newly developed art of electrotype printing. He emigrated to Chicago in 1857 and, along with partners S.P Rounds and James J. Langdon, established the city's first electrotype foundry. A few years later, in 1861, Zeese began his own independent foundry under the operating name of Zeese and Rand. This continued until the Chicago fire of 1871 destroyed the entire operation. Even so, he persisted and was soon reestablished as one of the nation's most eminent electrotype printers. He retired in 1889, selling his business, which was subsequently renamed the Franklin Engraving and Electrotyping Company. After touring Europe for several years Zeese returned to Chicago where he founded a new firm by the name of A. Zeese and Sons, specialists in photo-engraving. The firm prospered by printing numerous documents for the 1893 Chicago Columbian Exposition. Zeese formally retired in 1897 leaving the firm in the capable hands of his son Albert Zeese. Unfortunately the elder Zeese had little time to enjoy his well-earned retirement. On January 10th of 1898 Zeese was returning by train to his home in Ravenwood (near Chicago) and tragically fell from the steps of the train onto the railway platform, some 12' below, where he struck his head, perishing almost instantly. A. Zeese and Sons had their offices at 300-306 Dearborn Street, Chicago. Learn More...