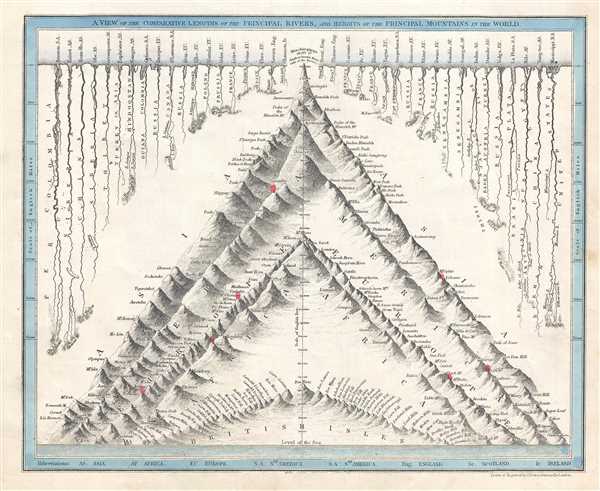 Unusual center weighted comparative mountains and rivers chart declaring the Amazon to be the longest river in the world.

This is a c. 1844 John Crane Dower comparative map or chart of the world's mountains and rivers. Charts of this kind were first introduced in England around 1823 and became a common feature in atlases throughout the 19th century.

The chart comparing the heights of the world's mountains occupies the center of the page, with the mountains divided by continent. Dower, however, separates out the British Isles, which are situated along the bottom border near sea level. Then the peaks of Africa, Europe, the Americas, and Asia are chronicled, with volcanoes marked by red plumes emitting from their summits, suggesting an eruption. The highest mountain in the world is said to be Kunchinginga at 28, 177 feet above sea level.

The comparative rivers chart occupies the space on either side of the central mountain chart, with the rivers not organized by continent, but by length. The longest is the Amazon River in South America, followed by Enisei River in Asia and the Mississippi River in the United States. Each river to illustrated in some detail, particularly in the area near its mouth.

This map was drawn and engraved by John Crane Dower c. 1844.