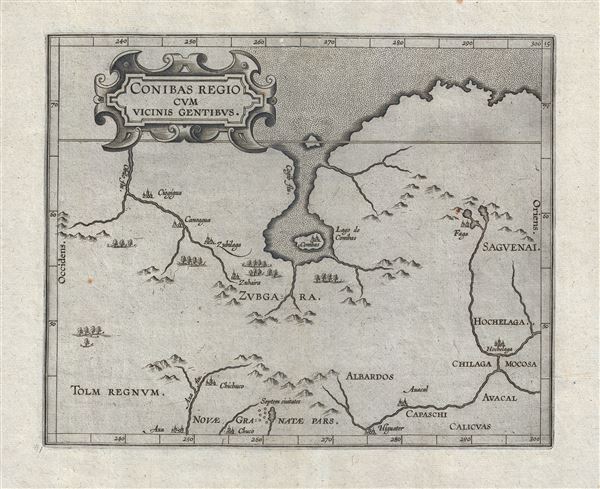 An enigmatic map and the first specific map of Northern Canada and the Northwest Passage.

An intriguing and enigmatic production, this is Cornelis van Wytfliet's uncommon 1597 map of northern central Canada, indeed it is the first specific map to detail this entirely unknown region. The scope of the map, though hard to immediately perceive, is vast, extending from the Arctic as far a south as the American Indian village of Higuater and New Mexico (Septem Civitates). Central to this map is the bizarre lake and city of Conibas.

Given the relatively unexplored nature of this region in late 16th century it is not certain from where the idea of Conibas was derived and what it is intended to represent. Nonthelss, there are some ideas. Although this map is the first to specifically detail the region, the idea of a great inland freshwater lake extending into the heart of North America from the high Arctic does appear in earlier maps. The first printed map of America to show a large inlet from the Arctic is Sebastian Munster's 1540 Novae Insulae XVII Nova Tabula. Munster is therein rendering Verazzano's Sea, a speculative inland sea opening to the Arctic or Pacific that Verrazano claimed to have discovered based upon misinterpretations of the Pamlico Sound and the Carolina Banks. However, Munster's inland sea was rather vague and formless, following the original speculative rendering laid down by Verrazano in his manuscript chart now stored at the Vatican. Most subsequent maps follow this convention, but with each map, Verazzano's sea became smaller and smaller. It was Giacomo Gastaldi (Shirley, 107), in his woodcut wall map of 1561, who finally gave Conibas the form we see here, i.e. extending inland via a narrowish channel and opening into a large inland lake with a central island. It was also Gastaldi who first uses the term 'Conibaz' and establishes much of the typonomy of this region. In 1568, the idea is expounded upon by Andre Thevet, who credits Jacques Cartier, who explored the coasts of North America from 1535 to 1542, as its source. Thevet knew Cartier personally and it is not unlikely that Gastaldi also met and spoke with the explorer. Cartier introduced the American Indian idea of Cornibotz, or Wampum Shells. Cornibotz were supposedly obtained by cutting open the fleshy portions of a dead body and submerging it into a large lake. Shells would collect in the wounds which could then be collected and converted into Wampum. From this Gastaldi and Thevet, either in correspondence or independently, or directly from Cartier, developed the idea of Lake Conibas. Conibas subsequently appears in the 1593 map of America by Cornelius de Jode, the 1594 woodcut world map of Petrus Plancius, the 1595 atlas map of the northern Polar Regions by Gerard Mercator, and, as offered here, the 1597 Wytfliet , the first specific map of the Conibas region.

Wyfliet also identifies other lands discovered by Cartier, such as Sagvenai, a river. He also identifies the American Indian village of Hochelaga, again recorded by Cartier. Hochelaga eventually evolved into Montreal. Further south the cartographer identifies Tolm Regnum and the Septem Civitates (Seven Cities), which corresponds to modern day New Mexico. The Seven Cities refer to the Seven Cities of Cibola, legendary golden cities sought by Hernando Coronado. The Seven Cities of Cibola were in fact Zuni pueblos and, although in the right light they can appear golden, in fact held little wealth as Coronado understood the term.

This map was published in 1597 to accompany Wytfliet's Descriptionis Ptolemaicae Augmentum, essentially an supplement to Ptolemy's Geographica intented to account for the discovery of the New World. It exists in three states, the present example being the third.

Cornelius van Wytfliet (1555 - 1597) was a Flemish cartographer and engraver active in the second half of the 16th century. Little unfortunately is known of Wytfliet's life or education. He seems to have been employed as secretary to the Council of Brabant, essentially the supreme court of the Duchy of Brabant. In cartographic circles Wytfliet is best known for his publication in 1597 of Descriptionis Ptolemaicae Augmentum, the first atlas dedicated exclusively to the America's. Wytfliet imaged the atlas as a supplement to classical Ptolemaic geographic, which traditionally accounted only for Europe, Africa, and Asia. The 19 maps contained within the Descriptionis Ptolemaicae Augmentum are some of the earliest specific maps detailed various parts of the Americas. Learn More...

Wytfliet, C., Descriptionis Ptolemaicae augmentum, siue Occidentis notitia breui commentario, (Louvain) 1597.     Wytfliet's Descriptionis Ptolemaicae Augmentum, published in Louvain (Belgium) in 1597, is considered the first atlas specifically dedicated to the Americas. Classical geography, as defined by Claudius Ptolemy's Geographia, only accounted for a three part world - consisting of Asia, Europe, and Africa. The discovery of the Americas in 1492 threw a wrench into this well-established geographic system. Wytfliet imagined his work as a supplement to the Ptolemaic atlas. Drawn from earlier maps, as well as the texts of Acosta, Hakluyt, de Bry, and Ramusio, the Descriptionis Ptolemaicae Augmentum consisted of a history of New Work exploration illustrated by 19 unique maps of the American continent. Many of the individual maps are the first specific illustrations of their respective regions. The work proved popular and went through several editions. The first Latin edition, printed in Louvain, appeared in 1597. Two subsequent Latin ediitons were printed in 1598 and 1603. Further editions appeared in 1605, 1607, and 1611.