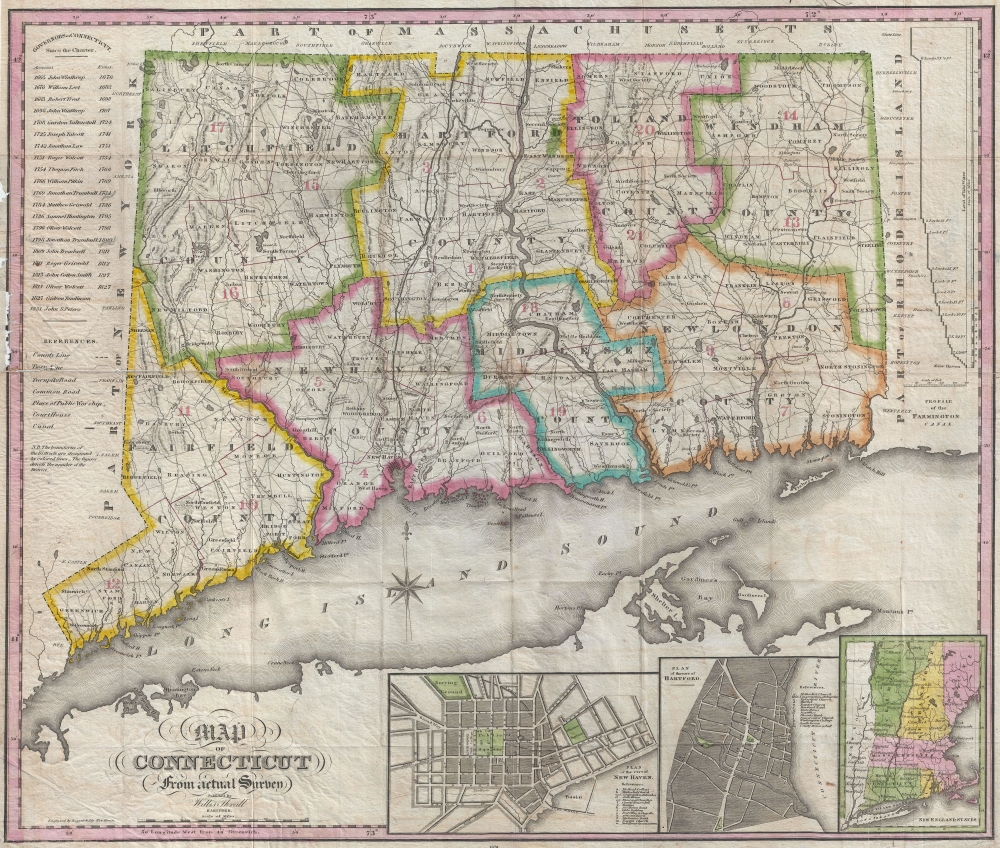 One of the few early maps of Connecticut actually published in Connecticut (New Haven).
$2,500.00

An extremely scarce map, this is Willis Thrall's 1831 pocket map of Connecticut. Thrall's map, which is dated at bottom center, covers the entire state of Connecticut as well as the adjacent Long Island Sound. Connecticut is here divided into eight color coded counties. Inset plans of New Haven, Hartford, and the New england States, rest in the lower right quadrant. The upper right quadrant features a profile of the Farmington Canal. A list of Connecticut governors starting with John Winthrop of 1665, and updated to include John S. Peters of 1831, appears in the upper left quadrant.

According to the Connecticut map historian edmond Thompson, this map was first engraved by Daggert and issued between 1827 and 1829. This is the second edition, published in 1831 with an update to the list of governors and the names of Thrall and ely added to the imprint. It was later reissued by different publishers in 1836, 1847, 1854 and 1858. This edition and the virtually unknown first edition are by far the most desirable and are found in few collections - a rare opportunity. It is also noteworthy that this map was published in New Haven, Connecticut.

Willis Thrall (1800 - June 20, 1884) was an American businessman and map publisher based in Hartford Connecticut during the early part of the 19th century. His the son of Joel Thrall and Miriam Fitch, both of Both Bolton Connecticut. Thrall published numerous maps and also seems to have opened a tool and rule company in 1844, which he passed on to his son, Edward Thrall, as 'Will Thrall and Son'. No Thrall engravings appear after about 1836, suggesting he gave on on printing, but the tool company seems to have prospered. Thrall's most important print work was published in conjunction with D. W. Kellogg, with whom his family was associated by marriage. Thrall died in June of 1884 and is inferred at Spring Grover Cemetery, Hartford. Learn More...

Good condition. Detached from and missing original binder. Some minor damage just encroaching on the left border were once attached to binder - see image. Backed with archival tissue for stability.

Thompson, E., Maps of Connecticut for the Years of the Industrial Revolution 1801-1860, #78.
Looking for a high-resolution scan of this?