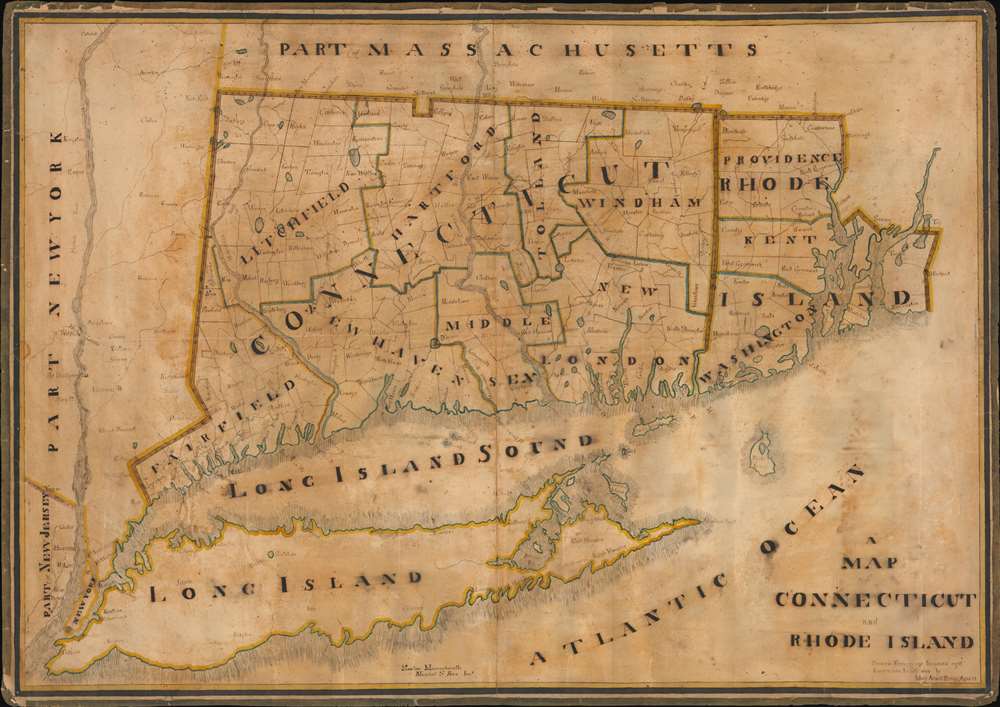 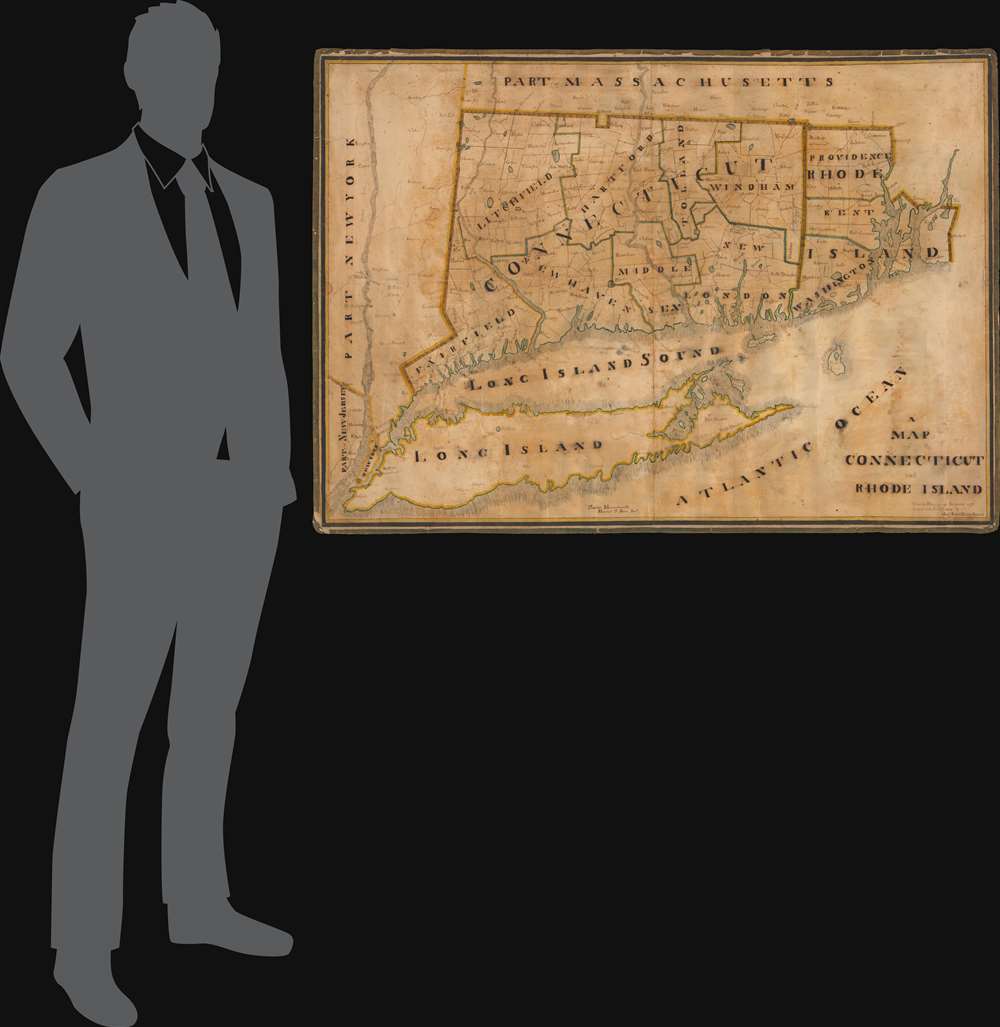 This is an impressive and painstaking 1828 manuscript schoolgirl map of Connecticut, Rhode Island, and Long Island - the largest such we have seen. Although Mary Ann D. Parker (1817 - 1842) was only 12 she drew this map, the work exhibits fine execution and a refined hand. Coverage extends from the Hudson River to Narragansett Bay and from New York City to Springfield, Massachusetts. Rivers, towns, counties, political boundaries, and some topographical features are noted. Along the northern border, a divot, the Southwick Jog, appears boldly.

When Mary drew this, she was a student of Marshall S. Rice of Newton, Massachusetts. Rice was a prominent local educator who in 1824 founded a school for boys at his home. Shortly thereafter he also founded the Newton Female Academy, where Miss Parker was likely a student. Mary had a tragic life and died at 25, possibly in childbirth, one year after she married John Sterns.

The peculiar divot in Connecticut's northern border can be traced to the 1642 survey efforts of Massachusetts surveyors Nathaniel Woodward and Solomon Saffery. The surveyors were commissioned to complete a survey of Massachusetts' borders. Their work led to contention with Connecticut, who found the survey line to be eight miles too far south, well into Connecticut territory. Then, as now, Massachusetts had extremely high taxes and so the residents of Enfield, Somers, Suffield, and Woodstock, applied for admission into Connecticut in 1724. While Massachusetts refused their request, in 1749 Connecticut voted to acquire the towns. The matter was sidelined by the French and Indian War (1754 - 1763) and subsequent American Revolutionary War (1775 - 1783). Following the Revolutionary War, the newly established states agreed jointly to hire a Commission to run a straight boundary from Union to the New York State line. In the process, it was determined that Massachusetts be awarded at 2.5 square mile tract in compensation of Connecticut's 1724 seizure of Enfield, Somers, Suffield, and Woodstock. This lasted until 1804, when yet another compromise decided the matter for good. The Jog remains.

While the use of mapmaking in teaching is first seen in Europe, mainly England, the Schoolgirl Map became a peculiarly American pedagogical tool in the first part of the 19th Century, a period wherein the standards and purposes in women's education were changing. While boys were frequently taught the practical execution of surveys and charts, the production of attractive and informative maps appears to have been primarily the domain of young women. Such maps can be found of the World, the United States, or more specific maps of states. These were usually based on generally available reference maps, such as those found in the atlases produced by Carey and Lea, Finley, and Mitchell.

The goals of these exercises were more far-reaching than teaching geography. Girls learned penmanship, each map often using three or more lettering styles. Mapmaking sharpened the retention and recall of factual information. Students were encouraged to take pains in their draftsmanship, and often achieved beautiful flourishes of artistic expression in their maps. But most peculiar to the American iterations of educational mapping was the goal of instilling a sense of civic pride and responsibility. Indeed, the key desired result of the education of girls in the post-Revolutionary-War United States was to prepare for the education of the next generation of American citizens, a patriotic duty which would primarily fall on the shoulders of these young women.

This is a unique manuscript and the only known example.

Good. Some staining and toning. Edge Wear. Original linen edging worn. Minor dampstaining. A few minor tears and crack closed and reinforced on verso.
Looking for a high-resolution scan of this?