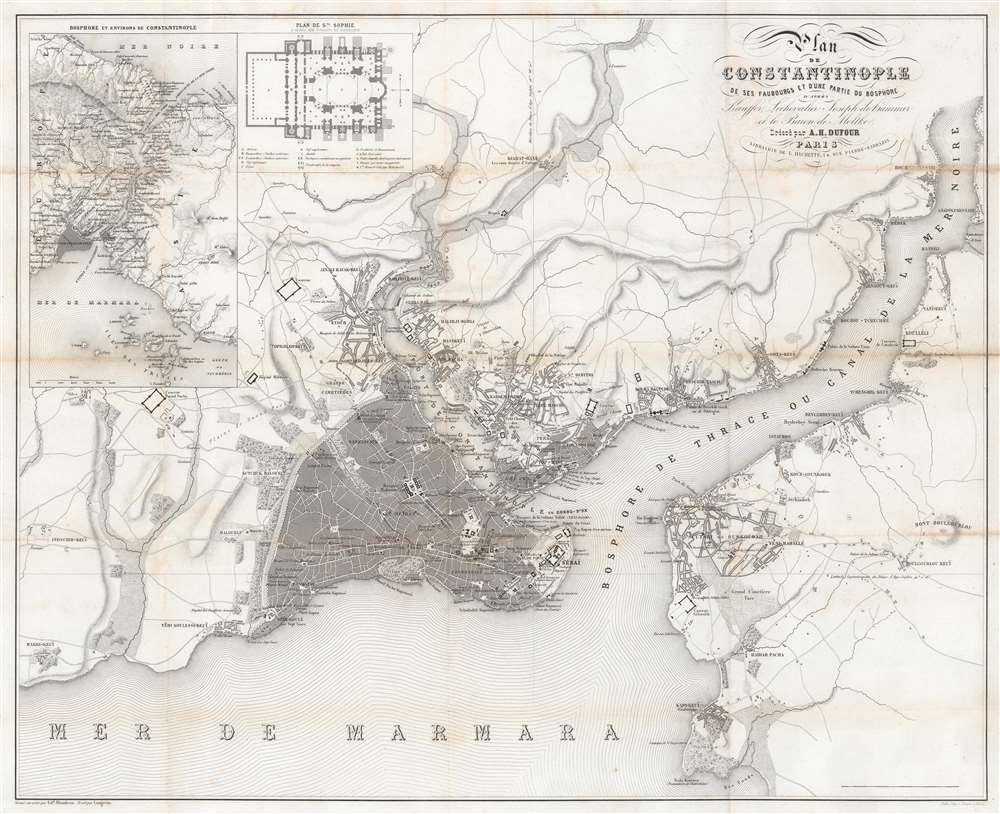 Istanbul during the Crimean War.

This is a c. 1855 Adolphe Dufour city plan or map of Istanbul / Constantinople, Turkey. Published during the Crimean War (1853 - 1856), Dufour provides a detailed look at the Ottoman capital. The Hagia Sophia (labeled here as Ste. Sophie) is illustrated, along with other mosques, including the Suleymaniye Mosque. Many are illustrated iconographically, meaning a cross-section of the building illustrates the floor plan. The Topkapi Palace, also known as the Seraglio, is illustrated in detail. Numerous other locations are identified, including the French and Austrian embassies, the Grand Bazaar, other shops, and cemeteries. An inset situated in the upper left details the Hagia Sophia, alphabetically identifying parts of the iconic building. A second inset illustrates the entire Bosporus along with Istanbul and its environs.

Hostilities erupted in July 1853 when Russia invaded two Ottoman suzerainties known collectively as the Danubian Principalities: Wallachia and Moldavia. The Ottomans immediately responded and fought a defensive campaign that eventually halted the Russian advance at Silistra, which the Russians besieged. Alarmed by the possibility of an Ottoman collapse, the British and French jumped to their aid, sending troops and supplies to Gallipoli. They did not arrive at Silistra until after the Russians had withdrawn.

At this point, public opinion at home, where discontent aroused by the wasted effort and expense of sending armies to the Balkans, exerted an influence on the alliance. This outcry led to the planning and execution of an invasion of the Crimean Peninsula and a siege of the Russian naval port of Sevastopol, their primary naval base in the Black Sea. The siege lasted eleven months. Russia finally sued for peace in March 1856. In the Treaty of Paris that ended the war Russia lost its Black Sea ports, Wallachia and Moldavia gained a modicum of independence, and Christians in the Holy Land were given a degree of equality.

This map was drawn by Langevin, engraved on steel by Edouard Blondeau, printed by the Balle Imprimerie, and published by Adolphe Hippolyte Dufour c. 1855. Two examples are cataloged in OCLC and are part of the collections at the University of Chicago and the Wisconsin Historical Society.