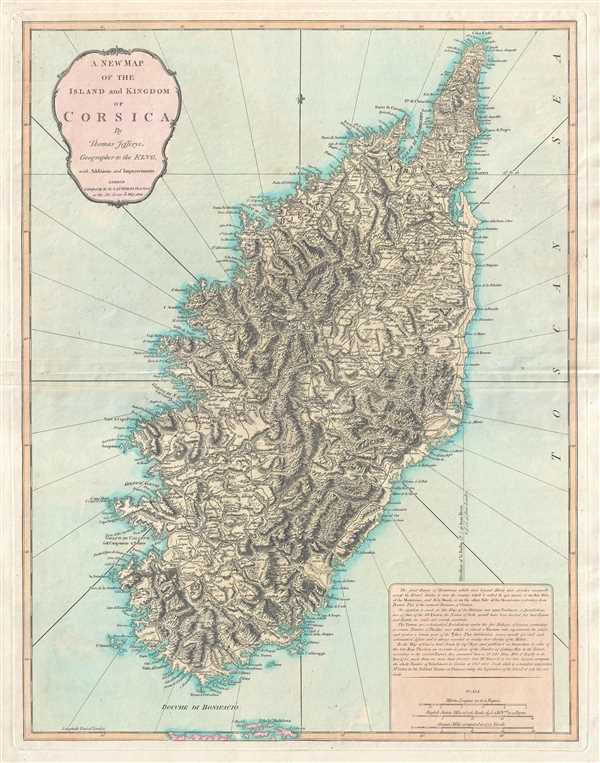 A beautifully engraved map of Corsica.

This is an 1823 Thomas Jefferys and Richard Holmes Laurie map of Corsica. Beautifully engraved, the map depicts the entire island in considerable detail along with the extreme northern region of Sardinia. Myriad cities, towns, and villages are labeled, along with several bays and other coastal areas. Roads are illustrated throughout the island and Corsica's topography is exquisitely rendered. A short description of the physical and political geography of the island, along with three different scales, is situated in the lower right corner.

A Short History of Corsica in the 17th and 18th Centuries

In 1729 the Corsican Revolution for independence from the Republic of Genoa began. After twenty-six years, in 1755, the independent Corsican Republic was proclaimed, though the Genoese did not recognize its independence. In 1767, following the Corsican conquest of Capraia, the Genoese decided to sell the island to France and cede to the French all rights to the island. The French conquered Corsica in 1769, effectively ending the Corsican Republic. In 1789, following the outbreak of the French Revolution, the Corsican nationalist Pasquale Paoli returned home from exile in Britain. Paoli invited British forces to intervene to free Corsica from French rule in 1794 and a joint Anglo-Corsican force drove the French from the island and created an Anglo-Corsican Kingdom. British forces, however, decided to withdraw from Corsica in 1796, after Spain entered the war. With Britain's exit, French rule returned to the island.

This map was created by Thomas Jefferys and published by Richard Holmes Laurie in 1823.


Richard Holmes Laurie (December 2, 1777 - January 19, 1858) was a British map and chart publisher and seller. Born in London to publisher Robert Laurie and his wife Esther Jouret, R. H. Laurie took over his father's share of the Laurie and Whittle publishing firm upon his father's retirement in 1812 and began trading as Whittle and Laurie. After Whittle died in 1818, Laurie continued the business by himself, trading under the imprint R. H. Laurie. During the 1820s and 1830s, Laurie expanded the nautical chart business until he was overtaken by Admiralty charts. Laurie married Susan Ann Coates on February 6, 1814 and later married Mary Ann Dennison on October 15, 1833. He left his business and all his property in trust for his two surviving daughters (both of whom were minors) with his principal engraver, Alexander George Findlay. Findlay continued the business in Laurie's name after acquiring its equity from his daughters.