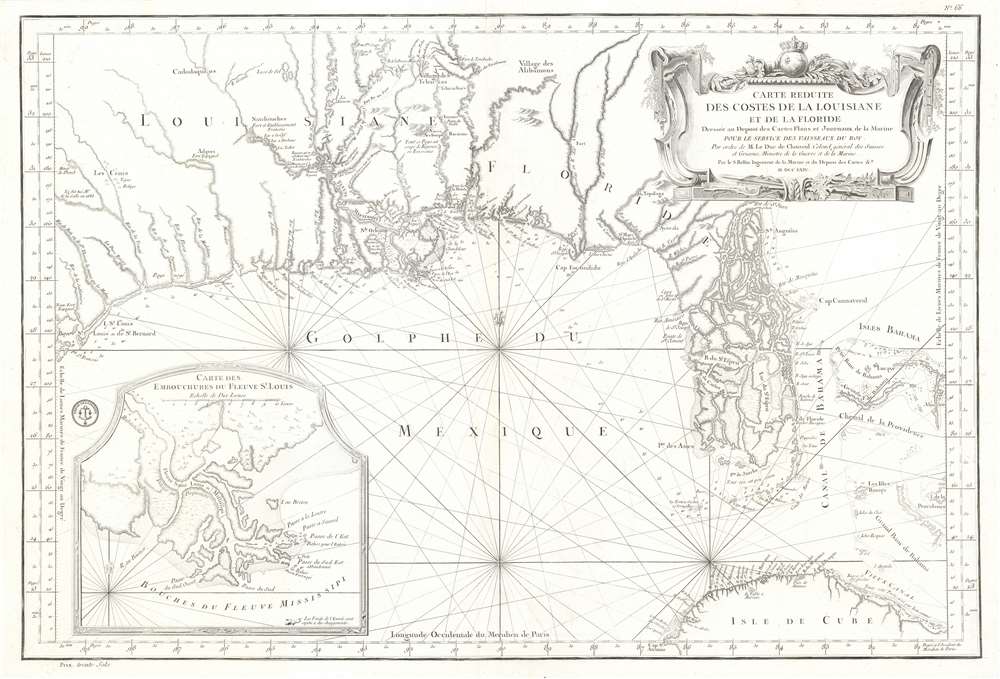 Includes one of the most stunning depictions of Florida as an archipelago in cartographic history.

This is a 1764 Jacques-Nicolas Bellin map of the Gulf Coast of the United States featuring an exceptional depiction of Florida as an archipelago. Illustrating the Gulf region from Galveston Bay (Baye St. Louis) to the Bahamas and from the southern United States to Cuba, numerous coastal useful for navigation are incorporated. Coastal islands, capes, bays, and river mouths are all noted, including Mobile Bay, the St. John's River, and the Mississippi Delta. Depth soundings are present where they have been taken. St. Augustine and New Orleans are labeled, as are several coastal forts. Indian villages are identified in the interior, as are rivers and a lead mine in modern-day Texas. Rhumb lines appear throughout, and Dry Tortugas in the Florida Keys and individual islands in the Bahamas are notated. An inset map in the lower left corner illustrates the mouth of the Mississippi River.

Florida as an Archipelago

The mapping of Florida as an archipelago originated with Thomas Nairne's now lost Map of South Carolina Shewing the Settlements of the English, French, and Indian Nations from Charles Town to the River Missisipi. Knowledge of Nairne's map survives through of Edward Crisp's 1711 A Compleat Description of the Province of Carolina, in which it is included as an inset reduction. Michele Currie Navakas, in her article 'Island Nation: Mapping Florida, Revising America,' identifies Nairne's slave raid as the source for this map and the archipelago model. In 1702, Nairne and thirty-three Yamasee raided the Floridian interior, capturing thirty-five Florida Indians, who were subsequently sold as slaves in South Carolina. Misinterpreting the complex Florida swamp and river systems, and the enormity of the Everglades, Nairne determined that Florida was not a peninsula, but an archipelago.

Scholars believe that Nairne, like most European visitors, based his geographical knowledge of the interior of Florida primarily upon indigenous sources. In Europe, Guillaume de l'Isle, one of France's most influential Enlightenment cartographers, used Nairne's Florida on his 1718 map Carte de la Louisiane et du Cours du Mississipi. De l'Isle's map secured widespread popularization of Florida-as-archipelago, establishing it as convention for the subsequent century. Between 1711 and 1799, at least seventeen maps from multiple cartographic traditions depict Florida as an archipelago, although not all used the same cartography. Florida's return to peninsular status follows Bernard Romans's 1775 book A Concise History of East and West Florida, although this truth would take decades to become universally accepted.

This map was created by Jaques-Nicolas Bellin and published by the Dépot des Cartes Plans et Journaux de la Marine in 1764. Although well represented in institutional collections, this map, with its extraordinary depiction of Florida as an archipelago, would be an incredible addition to any collection.