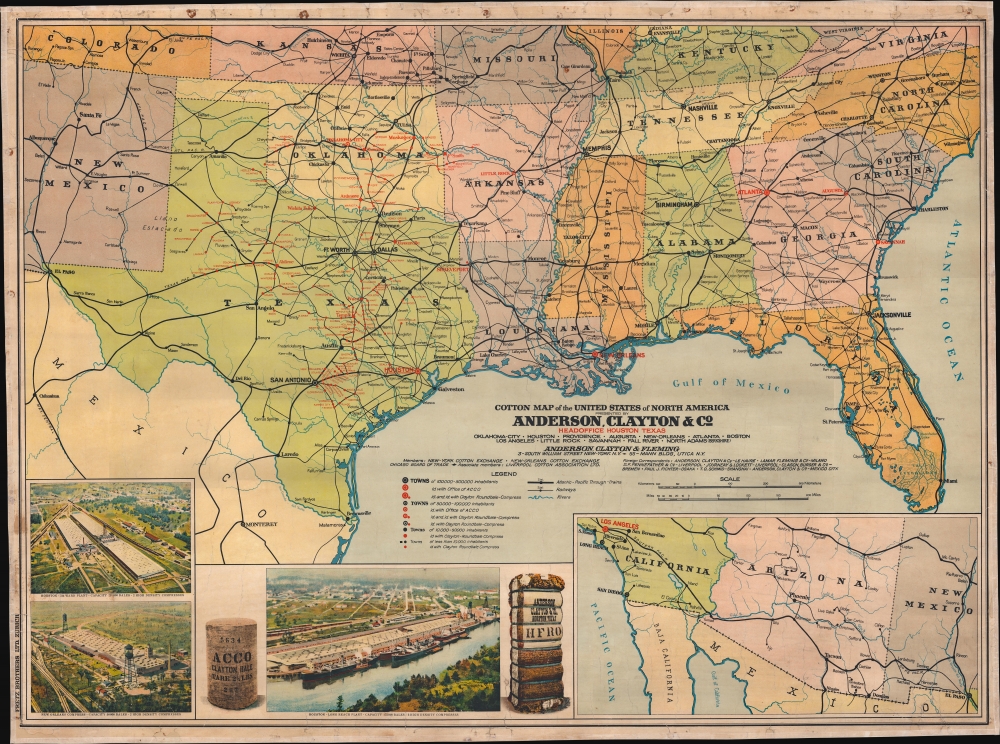 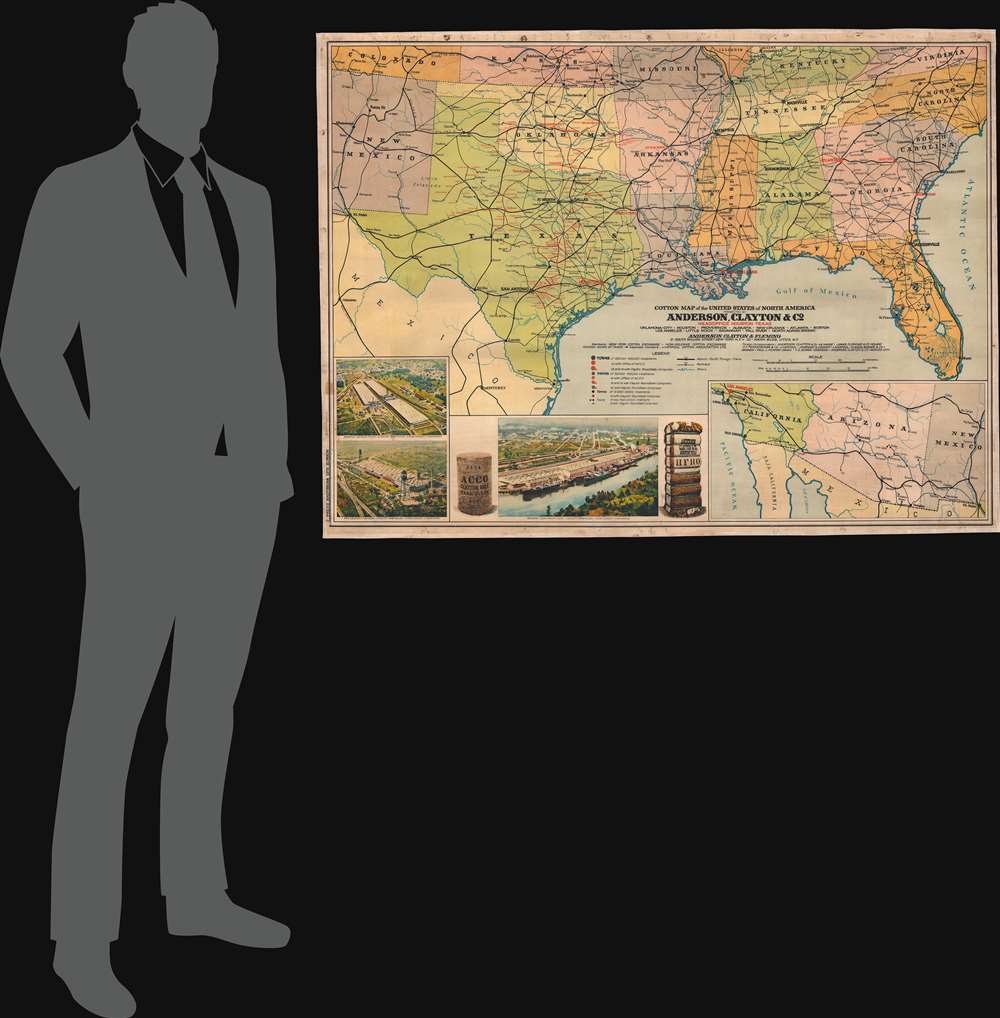 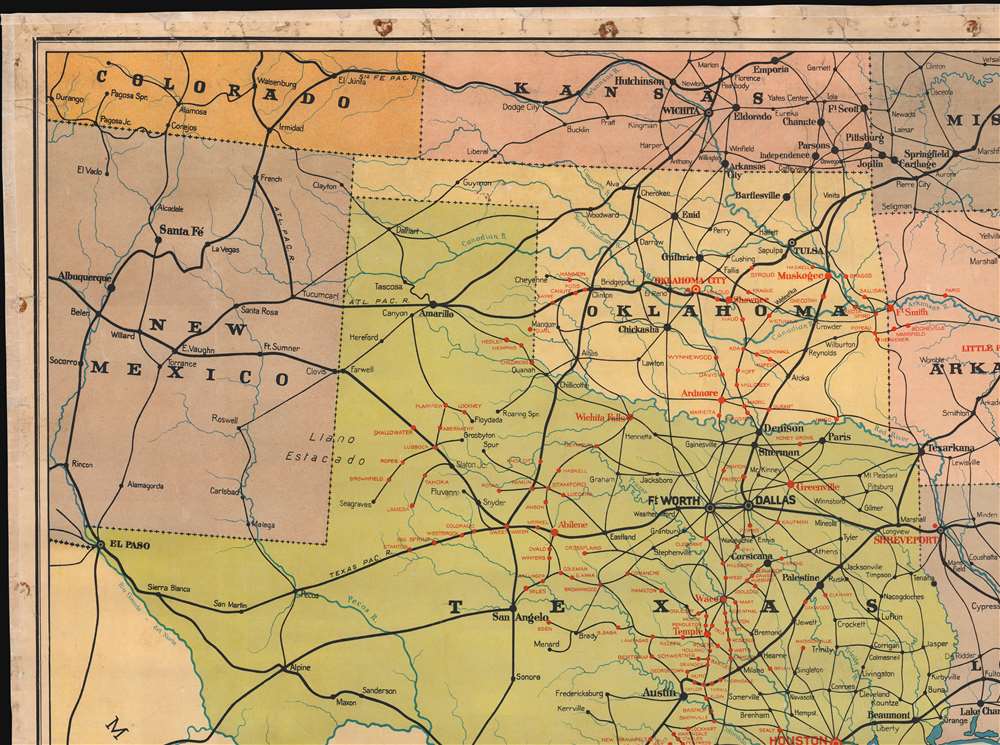 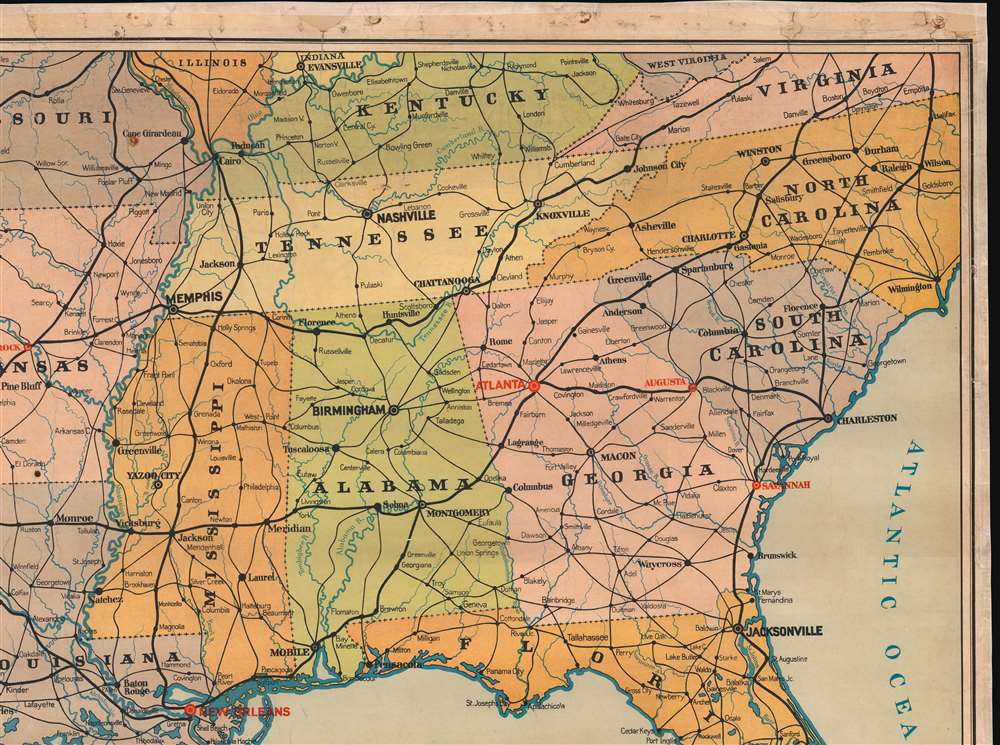 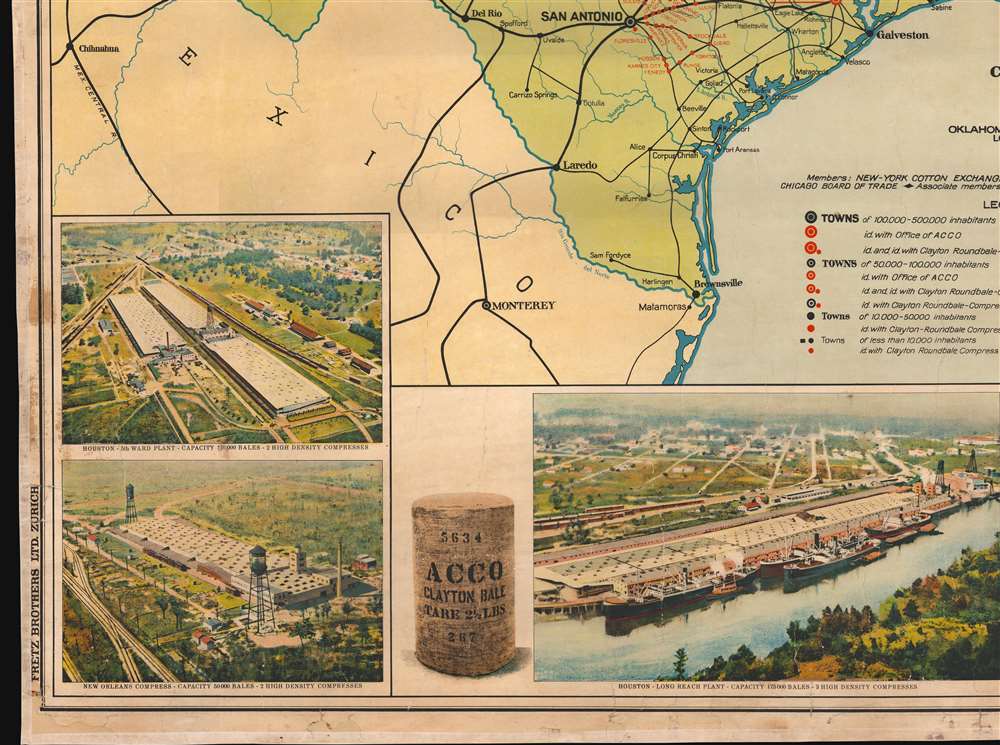 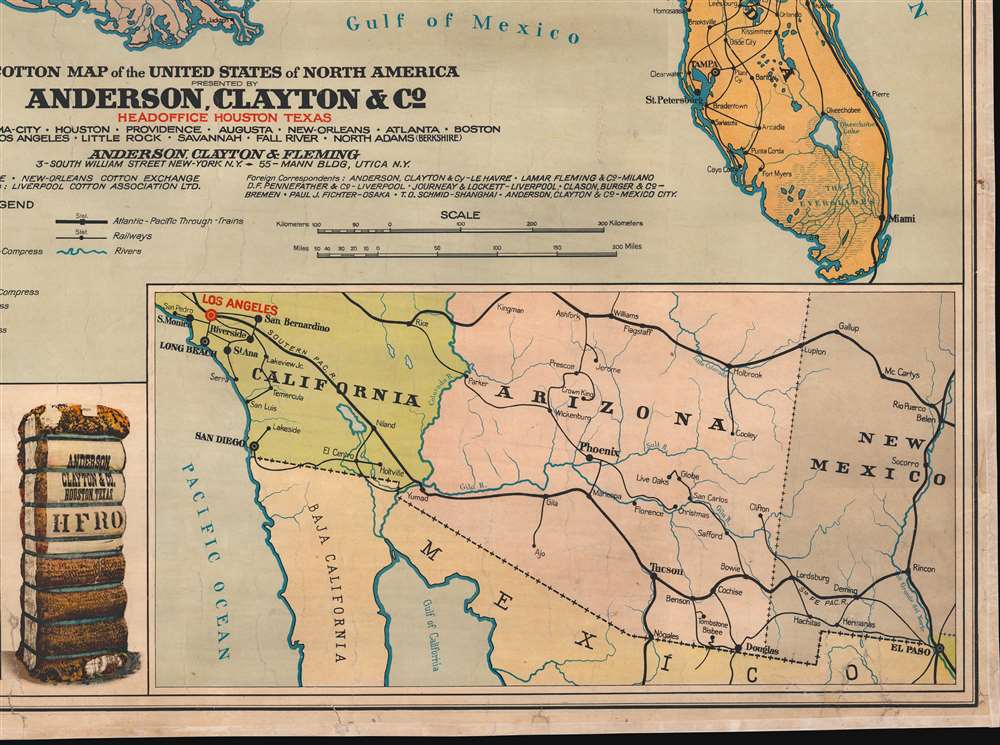 Transporting goods (including cotton) in the southern United States.
$2,500.00

This is a c. 1920s Anderson, Clayton and Company chromolithograph railroad wall map of the southern United States issued to celebrate the firm's rapid expansion and growth. Anderson, Clayton, and Company was an American cotton and dry goods firm that exported worldwide. This map was issued to celebrate Anderson Clayton, from small town mills, to national global logistic networks. Towns identified by red text hosted either an Anderson, Clayton, and Company office or a Clayton Roundtable-Compress. An inset in the lower right details the American Southwest from Los Angeles to El Paso, noting Los Angeles was home to an Anderson, Clayton office. Three views in the lower left illustrate cotton processing centers in Houston and New Orleans, noting bale capacity for each.

Anderson, Clayton, and Company was an American cotton trading firm founded in Oklahoma City on August 1, 1904, by Frank D. Anderson, his brother-in-law William L. Clayton, and Frank's brother Monroe Dunaway Anderson. In 1916, the company moved its headquarters to Houston for its proximity to a deep-water shipping port. Cotton demand exploded during World War I (1914 - 1918), and by the mid-1920s the firm had foreign correspondents in Europe, Africa, and Asia. The Great Depression (1929 - 1933) forced the firm to expand to international markets. The firm went public in 1945, and by 1950 its sales had reached 3.5 percent of the world's market. It was during this time that Anderson, Clayton and Company began to be called ACCO. ACCO further diversified in the early 1950s by creating a Foods Division. It acquired insurance firms in the 1960s and 1970s. In 1986, Quaker Oats bought Anderson, Clayton and Company and closed the company's headquarters in Houston.

This map was created and printed in Zurich, Switzerland, by Fretz Brothers Ltd. on behalf of Anderson, Clayton and Company. While the map is undated, the publisher, Fretz, and printing method, chromolithography, suggests 1920s. Fretz switched to offset printing in the late 1920s. This is the only known cataloged example. We have found no other records pertaining to this piece.

Fretz Brothers (Gebrüder Fretz; c. 1914 - ????) was a Zurich based printing and publishing firm active in the first half of the 20th century. We have not identified the founding brothers, but by the 1920s, Rudolph Fretz (1899 - 19??) was one of the proprietors. The firm specialized in lithographic and chromolithographic processes, producing dramatic color posters, maps, periodicals, and postcards. They are best known, from 1914, as the publishers of 'Das Werk', a Swiss architecture and design periodical. They participated in the Graphic Arts Exposition in Milwaukee, Wisconsin in 1924, during which time R. Fretz was in the United States studying offset printing as an employee at Gugleer Lithographing Co. of Milwaukee. According to Fretz, offset printing was cheaper process slow to take off in Europe due to World War I (1914 - 1918). After 1947, the firm was renamed 'Fretz and Wasmuth'. Learn More...

Very good. Full professional restoration. Light soiling. Mounted on linen and edged in silk.
Looking for a high-resolution scan of this?