1872 Mitchell Map of Cuba and the Bahamas 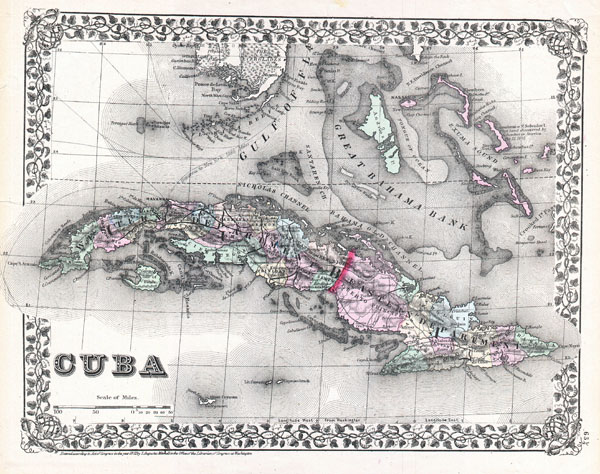 1872 Mitchell Map of Cuba and the Bahamas

A beautiful example of S. A. Mitchell Jr.'s 1872 map of Cuba. Shows cities, towns, railroads and roadways with color coding according to district. Also includes the Great Bahama Bank and many of the Bahama Islands. Shows parts of south Florida, naming Miami, Ponce de Leon Bay, Key West and the Everglades. Shows shipping routes from Havana to New York and other destinations. Features the vine motif border typical of Mitchell maps from the 1865-80 period. Prepared for inclusion as plate 18 in the 1872 issue of Mitchell's New General Atlas. Dated and copyrighted, 'Entered according to Act of Congress in the Year 1872 by S. Augustus Mitchell in the Office of the Librarian of Congress at Washington.'