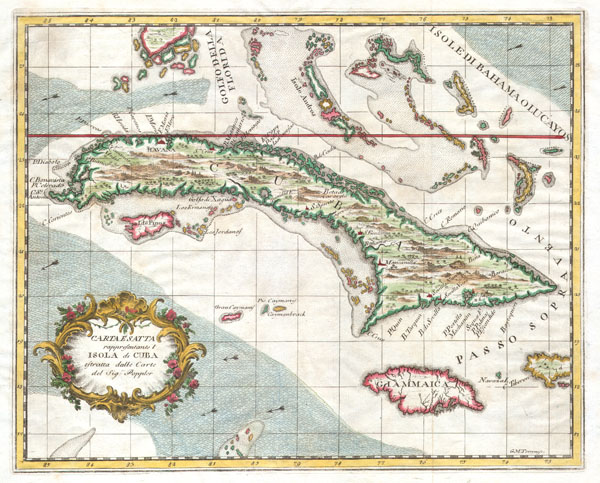 This is a beautiful decorative 1763 map of Cuba and Jamaica by Italian cartographer Giuseppe M. Terreni. Depicts the Island of Cuba with the south tip of Florida, the Bahamas, Jamaica and the Grand Caymans. Geographically Terreni references the important wall map of North America by British cartographer Henry Popple. Published in Livinoro Italy by Terreni for Coltellini's 1763 atlas Il Gazzettiere Americano.

Giuseppe Maria Terreni (1739 - 1811) was an Italian engraver, merchant, artist, and painter active in the middle to latter part of the 19th century. Terreni was born in Livorno, Italy, where he completed most of his artistic works. Between 1783 and 1785 Terreni executed a series of 18 engraved city views of Livorno in the style of Giuseppe Zocchi and Jakob Philipp Hackert. He also published several engraved maps and views in partnership with Lodovico Coltellini for issue in various Italian atlases. He was also, apparently, involved somewhat loosely with the antiquities trade. Learn More...

SELLERS, John R. & VAN EE, Patricia Molen. MAPS AND CHARTS OF NORTH AMERICA AND THE WEST INDIES 1750 - 1789: A Guide to the Collections in the Library of Congress, Library of Congress, Washington, Government Printing Office, 1981; No. 1729 and No. 1782); Phillips, Lee Phillips, 254.
Looking for a high-resolution scan of this?