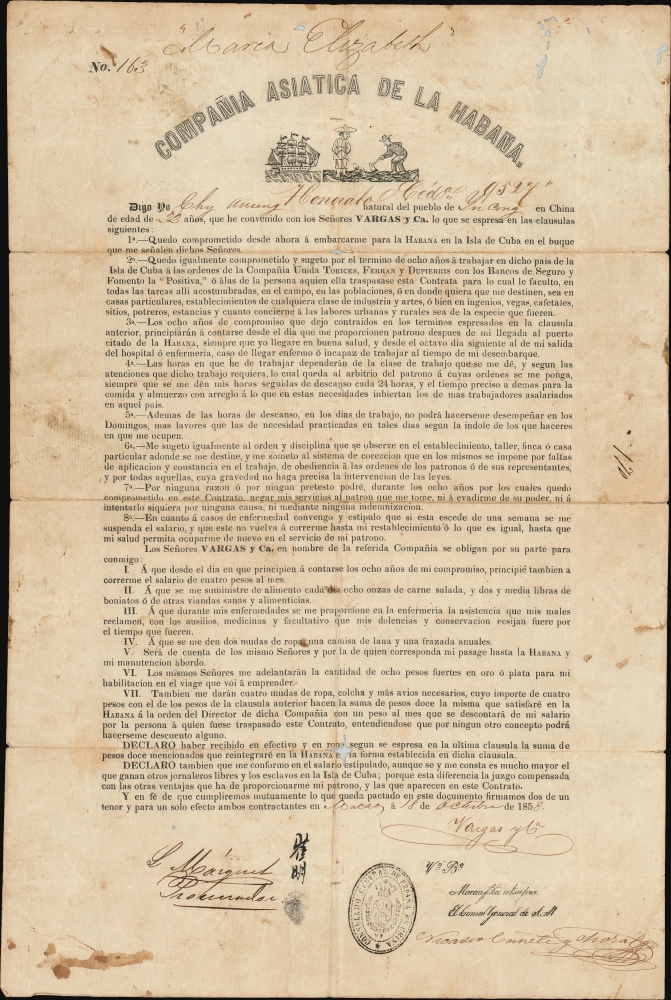 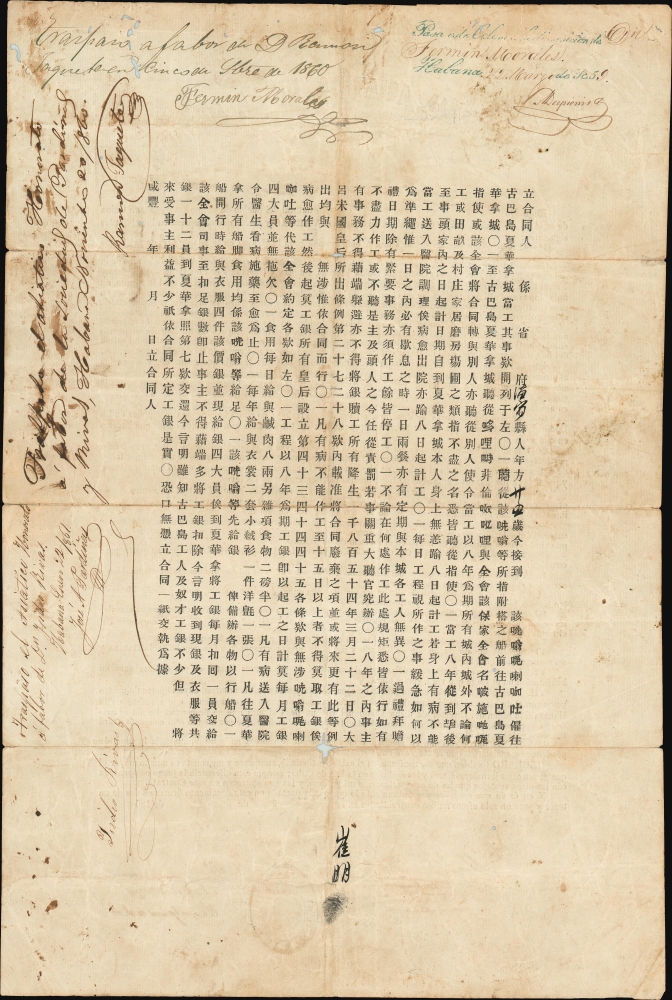 Highlighting a little-known episode in history, this is a rare 1858 broadside contract between the Compañia Asiatica de la Habana, and a Chinese laborer arranging for his importation to Cuba to work as an indentured servant on a sugar plantation. This document provides an incomparable record of the Chinese experience in Cuba. An illustration at top center shows a ship and a Chinese laborer working next to a Cuban farmer.

The indenture, printed in Spanish on one side and Chinese on the other, was singed in Macao on October 18, 1858. It commits the Chinese laborer 'Chy Anung' (蔡昂), then 23 years old, to work for a period of eight years in Cuba, at which point he was to be granted freedom. The document is singed by Chy Anung, as well as the Compañia agent in Macao, Vagas y Ca, and the Spanish Consul General in Macao, accompanied by a consular stamp. It outlines the terms of his employment, including a set salary, food ration, any necessary medical expenses, clothing, and accommodation. On the verso, in addition to the printed Chinese version of the contract, there are additional signatures and stamps dating as late as 1861, following 'Chy Anung' as he moved from place to place in Cuba.

In the early 1840s the United Kingdom began a concerted campaign to eliminate the Trans-Atlantic African slave trade. Along with Austria, France, Prussia, and Russia, the United Kingdom signed the 1941 'Treaty for the Suppression of the Africa Slave Trade', which allowed for naval boarding and search procedures for ships flying the colors of any signatory nation. Any slaves found would be freed, and the ship owners punished. While the treaty had only a limited effect on the North American slave trade, it dramatically limited access to new slaves in Spanish Caribbean colonies, like Cuba and Santo Domingo, where the harsh conditions of the sugar plantations demanded a constant flow of fresh labor.

In 1847, Cuban plantation owners turned to China for a new source of cheap indentured labor. The initial Chinse workers brought to Cuba were Hakka political prisoners from a recent uprising against the Qing. Later, as the program ramped up, recruiters were sent to Hong Kong and Macao, where poorly educated Cantonese were bamboozled into signing indentures, like the present offering, that required them to work for minimal pay in exchange of for passage and, supposedly, eventual freedom. Others were outright kidnapped from the streets of Hong Kong.

At the height of the Chinese-Cuban indenture trade, there were more than 120,000 Chinese under indenture in Cuba - known collectives as 'coolies' or 'culi'. Conditions were poor on the sugar plantations and the general treatment of the Chinese indentured servants was as cruel, if not more so, than the treatment of African slaves in the U.S. antebellum south. In 1874, word of the conditions of Chinese workers in Cuba reached Qing officials, who pressured Cuban authorities diplomatically to end the program - which they did. Most of the Chinese in Cuba left for China or the United States, but some remained, building new lives and intermingling with the Spanish and Afro-Cuban population. Today, only about 150 native Chinese remain in Cuba, but Havana still boasts a small Chinatown.

The Compañia Asiática de la Habana, named on this indenture, was the largest trafficker of Chinese indentured laborers into Cuba. Most workers brought to Cuba by the Compañia were settled on sugar plantations in and around Matanzas, near Cárdenas and Colón. Compañia would work through multiple agents, in this case Vargas Y Ca, most of whom operated out of Macao. With the organization's full knowledge and approval, agents like Vargas Y Ca resorted to deception and coercion to 'convince' illiterate Chinese peasants into servitude in Cuba.

The document names no publisher, but was likely printed in Hong Kong or Macao, as Spanish printers would not have had access to Chinese characters or the ability to compose them. It features several manuscript signatures and notes, recording Chy Anung's travels. While this document is by no means unique - there are several institutional archives with similar documents - it is rare to the market and a striking memorial to a little-known historical episode.

Good. Some splits along old fold lines. Minor loos bottom center. Manuscript here and there throughout. Some soiling.