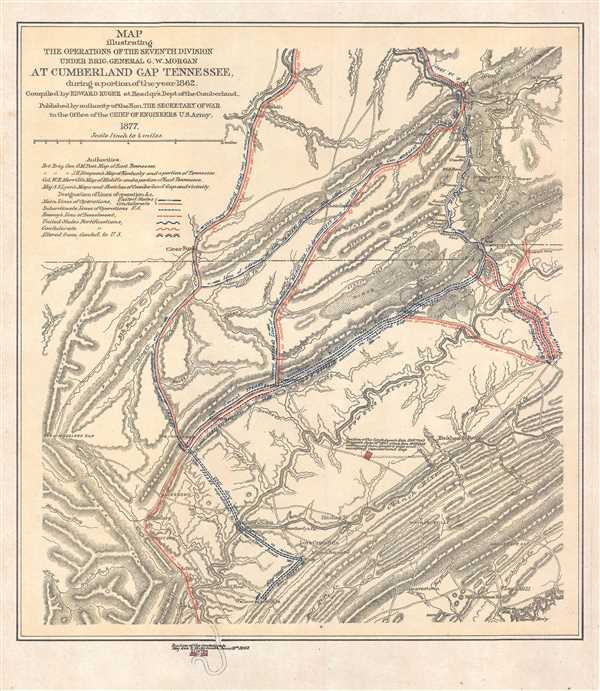 The Cumberland Gap changed hands between Union and Confederate forces several times before the Union finally held the position for good beginning in 1863.

This is a separate issue 1877 Edward Ruger map of the Cumberland Gap, a narrow pass through the Cumberland Mountains, which are part of the Appalachian Mountains, during the American Civil War. The Cumberland Gap holds a near mythic position in the history of colonial America as one of the key passageways through the lower central Appalachian Mountains and as part of the Wilderness Road. Situated at the junction of Kentucky, Tennessee, and Virginia, the map depicts a portion of all three states, stretching from the Cumberland River to Clinton and from Jellico Mount to Tazewell. The movements of both Union and Confederate forces through the gap are traced, allowing the viewer to understand that in 1862 the Gap changed hands at least twice.

The Cumberland Gap during the American Civil War

Confederate forces originally occupied and fortified the Cumberland Gap in the fall of 1861 and held the area until the summer of 1862, when the forces holding the Gap were ordered to help with the defense of Chattanooga. At that time Union general George Morgan and his men occupied the region and strengthened the fortifications. Morgan held the Gap until September 1862, when he chose to abandon it after Confederate General Edmund Kirby Smith invaded Kentucky. The Confederacy would hold onto the Gap until late summer 1863, when Union General Ambrose Burnside launched an offensive against Knoxville and also captured the region around the Cumberland Gap. Union forces would not cede the region to the Confederates again during the war.

this map was compiled by Edward Ruger and published by authority of the Secretary of War in the Office of the Chief of Engineers in 1877. While represented in institutional collections, this map is rarely seen on the market.