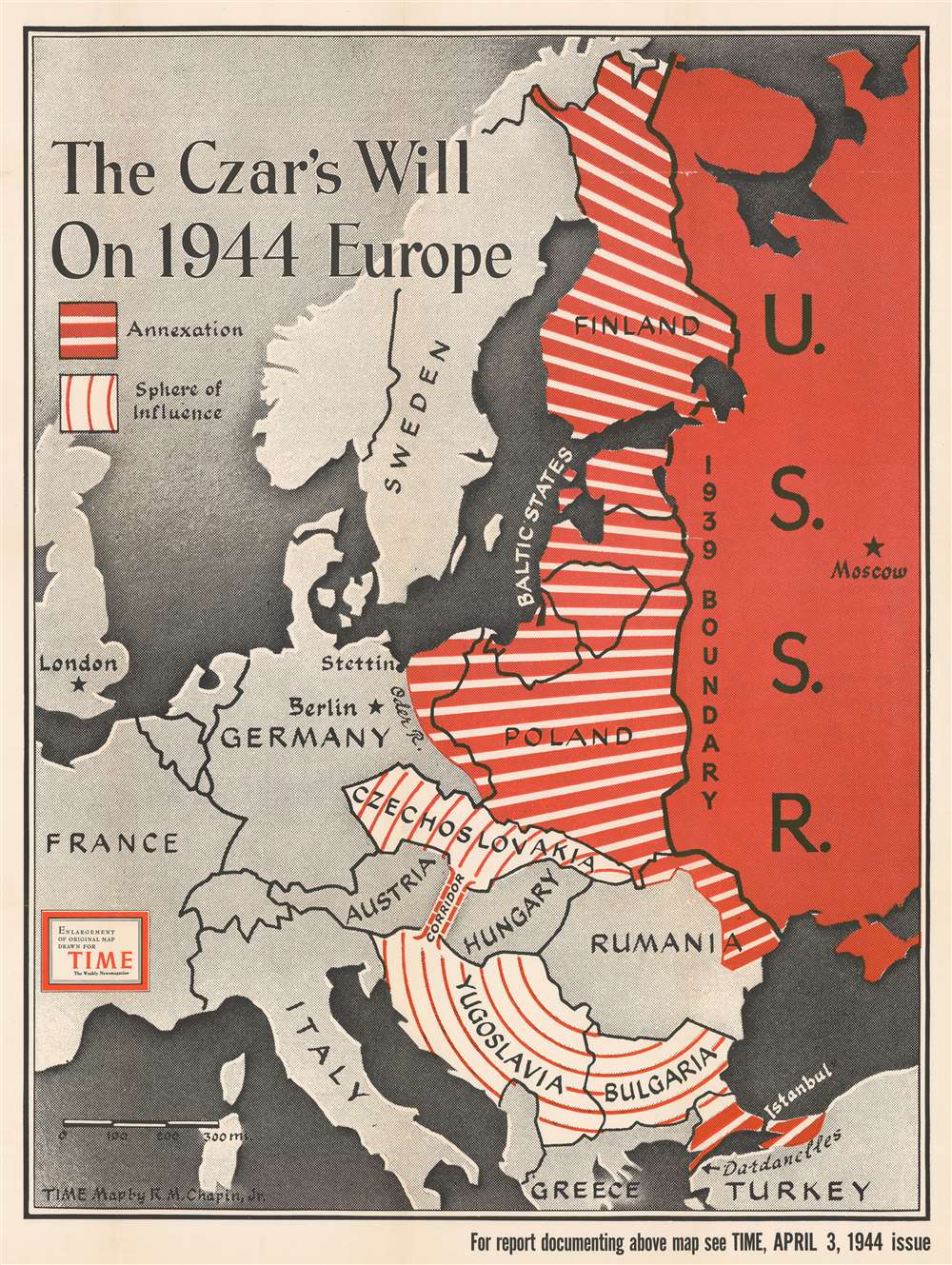 Dating from an era when the United States was fighting a truly global war against Nazi Germany and Imperial Japan, this 1944 Robert M. Chapin Jr map of Eastern Europe takes aim at neither of America's two official enemy states, but one of its allies. The map depicts the region from England and Scotland to the U.S.S.R and from the Arctic Ocean to Turkey and warns of the 'czar's will' to annex and exert influence over vast swaths of Eastern Europe. The Soviet Union is shaded red, a color traditionally associated with Communism, and is illustrated within its 1939 borders, while western Europe is shaded gray. The space in between, the areas the Soviets are supposedly eyeing, are shaded with two different patterns of red and white stripes. Parts of Europe that are apparently going to be annexed, shaded with thick red stripes and thin white stripes, include Finland, all three of the Baltic states (Estonia, Latvia, and Lithuania), Poland, eastern Germany, and eastern Romania. The Bosporus and the Dardanelles are also going to be annexed (which means Istanbul would fall into Soviet hands), finally satiating Russian desires for a secure warm-water port along the Black Sea. This would effectively make the Soviet Union an imperial power in Eastern Europe, replacing the hegemony of the Nazis. It must not be forgotten, however, that direct control is not the only method referenced here. Czechoslovakia,

Relations Between the Western Allies and the Soviet Union

This piece, which is obviously not an official map of the United States government, wonderfully illustrates how relations between the Western Allies (Britain and the United States) and the Soviet Union began to fray as World War II continued on into yet another year. These three governments were 'strange bedfellows', and it was said by more than one official that they did not mind watching the Nazis and the Soviets fighting each other in the frozen expanses of Eastern Europe. However, it became more and more apparent that Stalin had designs on expanding his sphere of influence after the war, as this map brutally illustrates.

This map was created by Robert M. Chapin for TIME Magazine and was originally published to accompany an article in the April 3, 1944 issue. TIME subsequently published this edition of the map separately. The OCLC records examples of this map as being part of the collection at Franklin and Marshall College and the University of Illinois Urbana-Champaign.