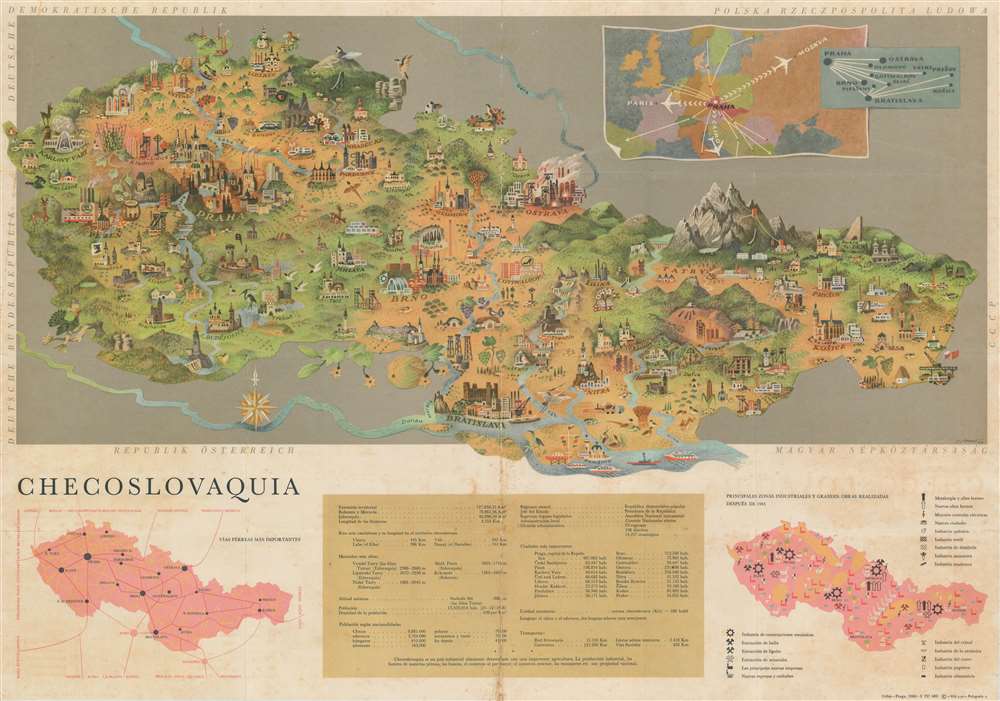 This is an enchanting 1960 Polygrafia pictorial map of Czechoslovakia. Charming pictorial vignettes of important buildings mark cities and towns throughout the country, including Prague, Plzen, Brno, Bratislava, and Košice. In Prague (Praha) these include the Church of Our Lady before Týn, the Charles Bridge, and the St. Vitus Cathedral. Illustrations of birds, deer, and agriculture renders the entire piece very warm and inviting. Two smaller maps are situated along the bottom border and flank a table containing statistics about the country. One of the maps details Czechoslovakia's railroad network, while the other focuses on industrial zones and other projects completed since 1945.

This map was created and published by Polygrafia in Prague in 1960. This is the only known example.

Polygrafia (1907 - 1999) was a prolific general printing and publishing house based in Prague (Praha), the Czech Republic in the middle part of the 20th century. Polygrafia emerged out of the Chezh Graphic Union (Česká Grafická Unie). The Polygrafia imprint was active from roughly 1922 to 1999. During the Socialist Era Polygrafia was nationalized and specialized in state propaganda publications. In 1989, their iconic late Art Nouveau headquarters were converted into a luxury hotel. Learn More...

Good. Map exhibits overall toning, some foxing, and wear along original fold lines. Minor verso repairs to fold separations in the margins and at fold intersections.