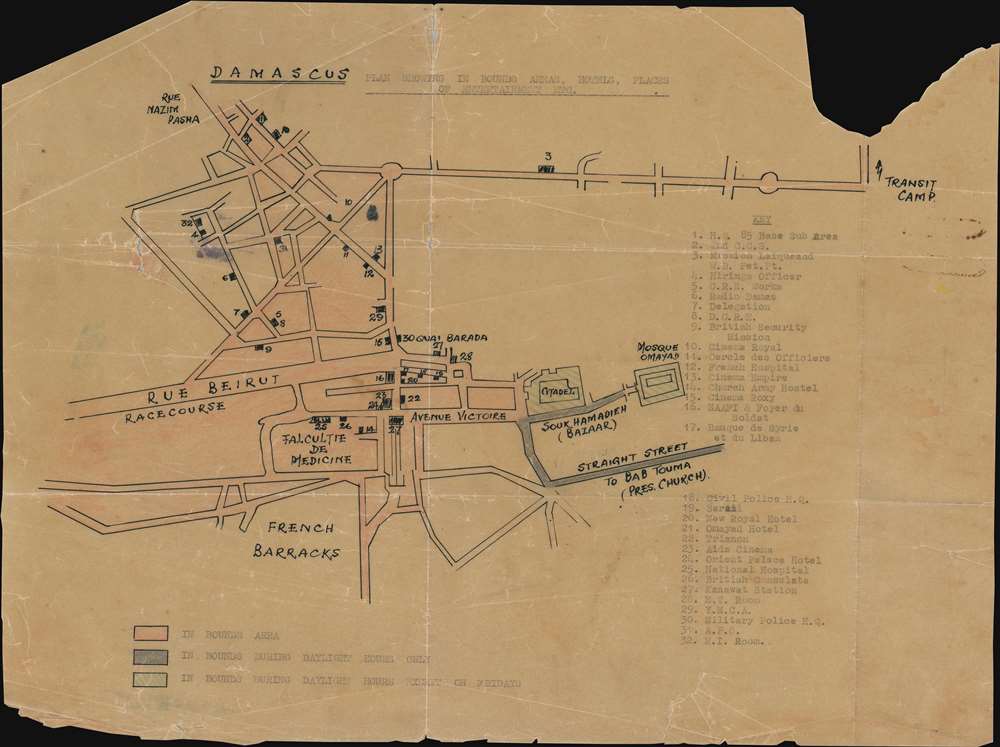 This is a one-of-a-kind c. 1942 manuscript map of Damascus, Syria created during the British occupation of the city after the successful June 1941 battle during the Syria-Lebanon Campaign. Illustrating only a small part of the city, 'in-bounds' areas are shaded three different colors to emphasize where British troops were allowed to explore. The red shaded areas, which include the medical school (Falcultie de Medicine) and the racecourse, are parts of the city the soldiers were allowed to exist in, while the green areas, which are the Citadel and the Omayad Mosque, were 'in bounds' during daylight hours except on Fridays. The three streets shaded gray were only 'in bounds' during daylight hours. Thirty-two locations around the area are numerically identified and correspond with a key situated along the right side. Some of these include cinemas, hotels, the Church Army Hostel, the Y.M.C.A., and the headquarters of the military police. Intriguingly, the map's title, the key (index) and the text explaining which areas are 'in bounds' when have all been typed on a typewriter while the rest of the map was completed in manuscript. .

The Battle of Damascus and the Syria-Lebanon Campaign

In 1941, Syria and Lebanon were held by Vichy France. A coup d'état in Iraq on April 1, 1941 instigated the Anglo-Iraqi War (May 2-31, 1941) after the leader of the Iraqi nationalists Rashid Ali appealed to Nazi Germany for help. This war ended in the establishment of a British puppet government in Iraq. Britain then launched the Syria-Lebanon campaign (June 8 - July 14, 1941) in an effort to prevent Nazi Germany from using Vichy-French controlled airfield in Syria and Lebanon to attack British forces in Egypt. During this campaign, which suffered from a severe lack of troop strength, the British were also preparing for the operation to relieve the Siege of Tobruk in North Africa and were fighting in the East African Campaign as well. Damascus was captured on June 21, 1941, and Beirut fell to the Australian 21st Brigade on July 10. The Armistice of Saint Jean d'Acre was signed four days later.

Unfortunately, the map is not dated, and very little scholarship is available about Damascus itself during this period in its history. Luckily, we were able to locate a digitized reminiscence of an American Field Service volunteer named Charles P. Edwards who was a member of a British ambulance unit in the Middle East and North Africa from October 1942 until at least January 1943. Edwards spent six weeks in Damascus from mid-November through the end of December 1942 working at a casualty clearing station and references a transit camp outside of town. A transit camp is referenced here as well, with an arrow in the upper right corner pointing up off the map toward a transit camp. Thus, thanks to Edwards's account, we are able to place a date of c. 1942 on this piece.

This map was drawn in Damascus, Syria, likely by a British or Australian soldier, during the occupation of Damascus c. 1942. This is likely a one-of-a-kind artifact, as we have been unable to unearth anything even remotely comparable.

Fair to Good. Manuscript map drawn on wax paper. All color present and all text easily readable. Exhibits loss along top and bottom margins that does not effect the map. Exhibits tears along original fold lines. Blank on verso.
Looking for a high-resolution scan of this?