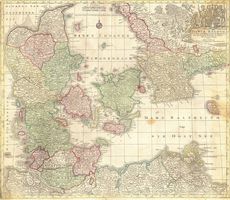 This is a spectacular and 1770 Lotter map of the Kingdom of Denmark. Formally titled 'Daniae Regnum.' Features an elaborate title cartouche bearing the Danish royal crest. Includes parts of modern day Sweden and Germany.

Generally very good or find condition save for light soiling, largely limited to the margins.
Looking for a high-resolution scan of this?