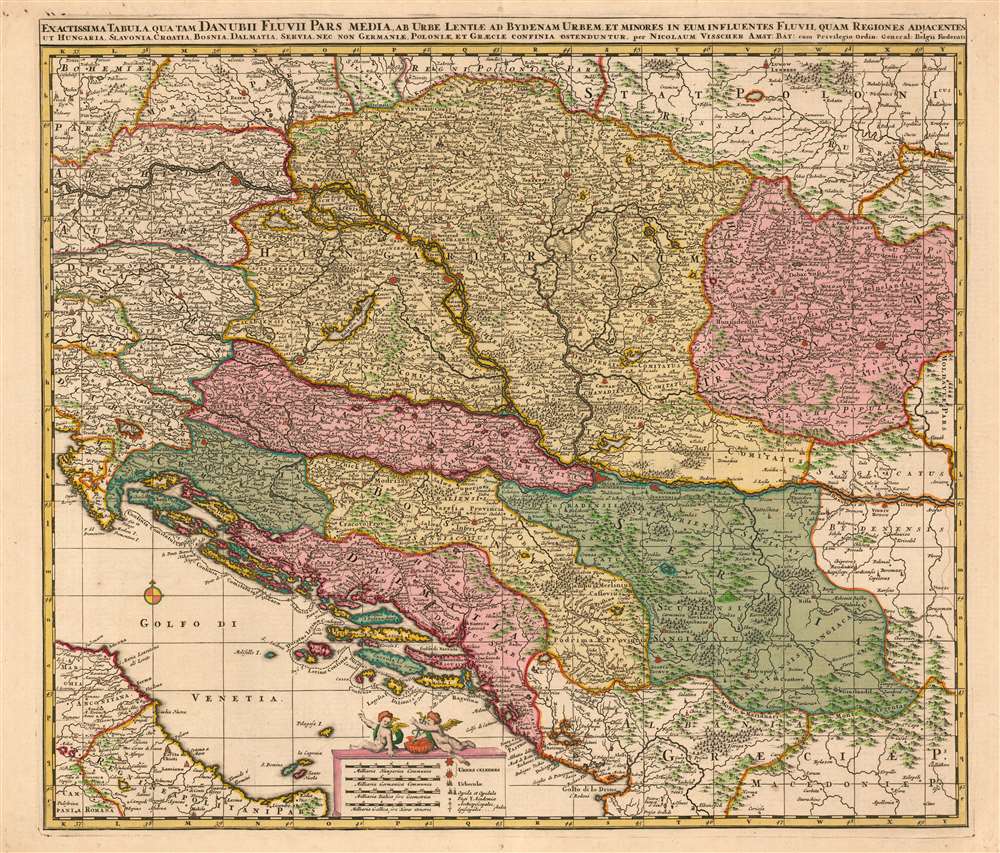 This is a beautiful, contemporary-color example of Nicolas Visscher's c. 1677 map of the middle part of the Danube River. The map encompasses much of what would be considered the seat of war between Christian European powers and the Turkish Empire. Austria, Transylvania, Sclavonia, Croatia, Bosnia, Serbia and Dalmatia. Portions of Austria, Greece and Italy appear as well. Vienna, Buda and Pest, and Belgrade are among the major cities appearing here.

The maps of the Visscher family are prized for the superb quality of engraving and the high level of artistry in their compositions; this map is no exception. They generally employed larger plates and finer detail than the mapmakers of the first half of the 17th century, improving the clarity of the maps and allowing the addition of more geographical detail. While the appeal of the map to the modern viewer is primarily visual, there are many features which indicate the map was meant to be easily consulted and comprehended, in spite of the density of detail offered by the piece. For example, the Dalmatian coast's complicated archipelago includes dotted borders indicating the duchies to which the various islands belong. The latitude and longitude lines serve double-service, by providing the framework for a coordinate grid keyed to exhaustive tables of place names printed on the verso of the map.

The maps's multiplicity of named cities and towns is made more legible by the inclusion of a legend, indicating the sizes of the settlements with different symbols. Famous cities (Vienna, Belgrade) are given more pictorial symbols than smaler cities, forts and villages. The addition of a cross indicates a bishop's seat; a double-armed cross does for that of an archbishop. A caduceus is used to indicate the presence of an academy - though typically associated with commerce, the caduceaus also had reference to astrology, alchemy, and astronomy, so perhaps the application of the symbol here is not strange. A number of villages are marked with a symbol reminiscent of a pennant, which does not appear in the legend. They appear near the Danube in Serbia and just across the river into Hungary: Wadazin, Maraculla and Pescabara. We see reference to Pescabara as a Turkish garrison town, and so likely all three settlements fall in this category.

Sitting on the cartouche containing the map's scales and legend are two putti, apparently discussing the map itself. One of the pair carries a caduceus - perhaps highlighting the academies noted on the map itself, or perhaps indicating the importance of the region overall as a trade route. The symbol often mistaken as a Rod of Asclepius. The latter is a rod entwined with a single snake. Sadly, the U.S. Medical corps adpoted the Caduceus as a symbol - largely at the insistence of a single officer- so the grossly inappropriate replacement of a symbol of commerce in place the symbol of the healing arts is widespread, particularly in the United States.

This map was engraved for inclusion with Visscher's Atlas Contractus It is sometimes dated as early as 1658, but it cannot have been produced earlier than 1660, the year the dedicatee van Hoorn took part in his embassy to London. It is far more likely that it was engraved in the vicinity of 1670, with the dedication being added to honor van Hoorn posthumously. The presence of th the composite atlas published by the family starting in the mid-1670 and continuing without change into the 18th century. Fifteen examples of the Atlas Minor appear in OCLC with varying pagination; OCLC also catalogues some two dozen examples of the separate map.