1586 Waghenaer Nautical Chart of Coast of Denmark and Sweden 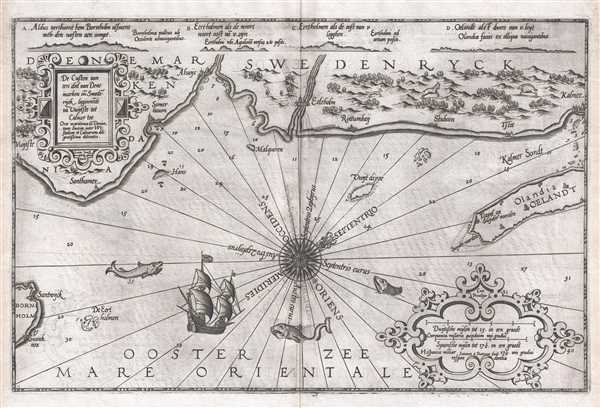 1586 Waghenaer Nautical Chart of Coast of Denmark and Sweden

This 1586 nautical chart or maritime map of Sweden and Denmark along the North Sea was produced by Lucas Janszoon Waghenaer for his 1586 Spieghel Der Zeevaerdt, a chart book of European coastlines. This nautical chart is oriented to the northeast and covers the coast of modern day Sweden from Vuytste and Bornholm (Bornholm) to Kalmar (Kalmer) and Öland (Olandia/Oeland). This chart features an intricate compass rose in the center with eight compass headings labeled as well as two decorative cartouches, one for the chart title and one for the chart scale. Depth soundings are recorded throughout. Shallow water is noted by stippling and a safe harbor is depicted with an anchor at Somerhauen. Sea creatures and a sailing ship are included in the sea. The towns along the coast are depicted realistically so that they could be easily identified while at sea and forests and mountains are drawn in profile. Farm buildings and fields are represented and a boar, goat, and fox are included for gorgeous detailing.

Waghenaer, Lucas Janzoon, Spieghel Der Zeevaerdt     Spieghel Der Zeevaerdt was the first published nautical atlas and became an immediate success. Partially based on Waghenaer's observations as a navigation officer and partially on his vast experience in practical navigation methods, Spieghel Der Zeevaerdt combines text, which is based on traditional 16th century navigation publications, and charts which makes this the world's first published pilot guide. This atlas was printed in folio format, an innovation for the time, and was eventually printed in Dutch, French, English, German, and several other languages. Waghenaer eventually published several other editions of his pilot guides, which were smaller and more practical, particularly with mariners as the large folio editions were difficult to use onboard ship.

Very good. There is some slight transference.