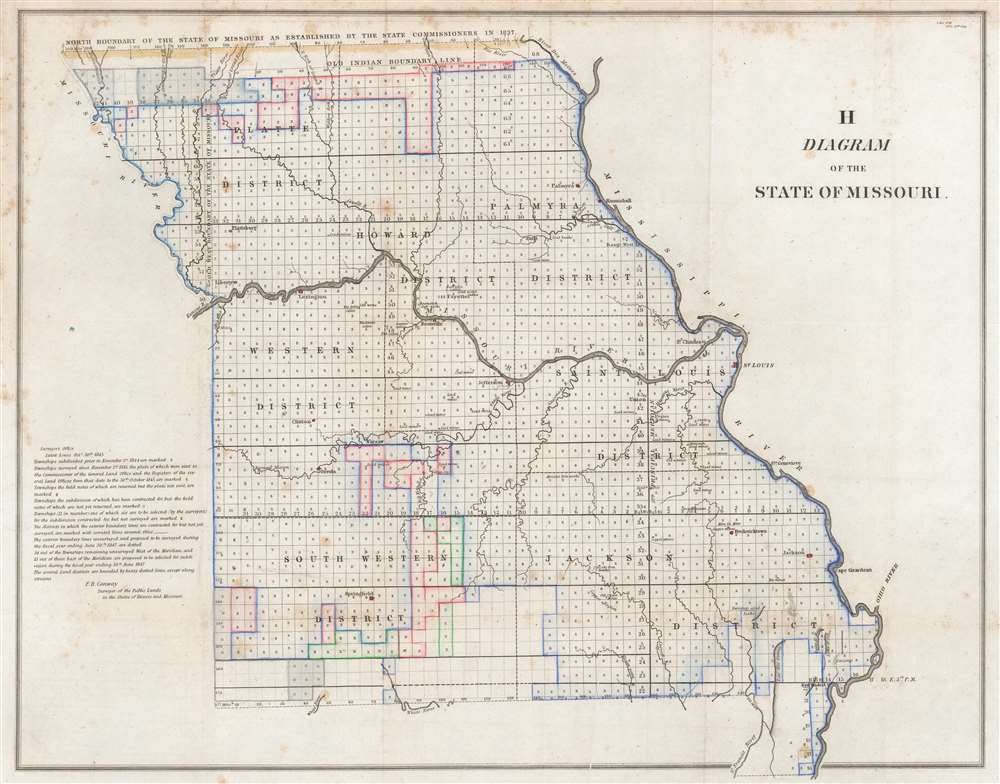 This is an 1845 Frederick R. Conway Land Office survey map of Missouri. The state has been platted into townships, with letters 's', 'z', 'o', and 'x' indicating the status of each township's survey. Districts within the state are labeled, and cities and towns are identified, including St. Louis, Palmyra, and Hannibal. The evolution of Missouri's borders is traced as well, with lines marking the 'Old Indian Boundary Line', the 'north boundary of the State if Missouri as established by the state commissioners in 1837', and the 'old west boundary of the State of Missouri.'

This map was created by Frederick R. Conway for publication in a report to the U.S. Senate in 1845. We note six examples cataloged in OCLC which are part of the collections at Yale University, the Thomas Fisher Rare Book Library in Toronto, the Wisconsin Historical Society, the Missouri University of Science and Technology, the Denver Public Library, and the University of Oregon.

Frederick Rector Conway (July 4, 1799 - December 16, 1874) was an American surveyor and cartographer. Born in Tennessee, Conway was one of seven brothers. He and his family moved from Tennessee to Missouri in 1818. Conway was appointed the Surveyor General of Illinois and Missouri at St. Louis on May 12, 1845 and was notified the following day. He was also known by another title, Surveyor of the Public Lands in the States of Illinois and Missouri. According to an obituary, Conway had been sick for some time at the time of his death, but his illness had not been considered life threatening. Learn More...