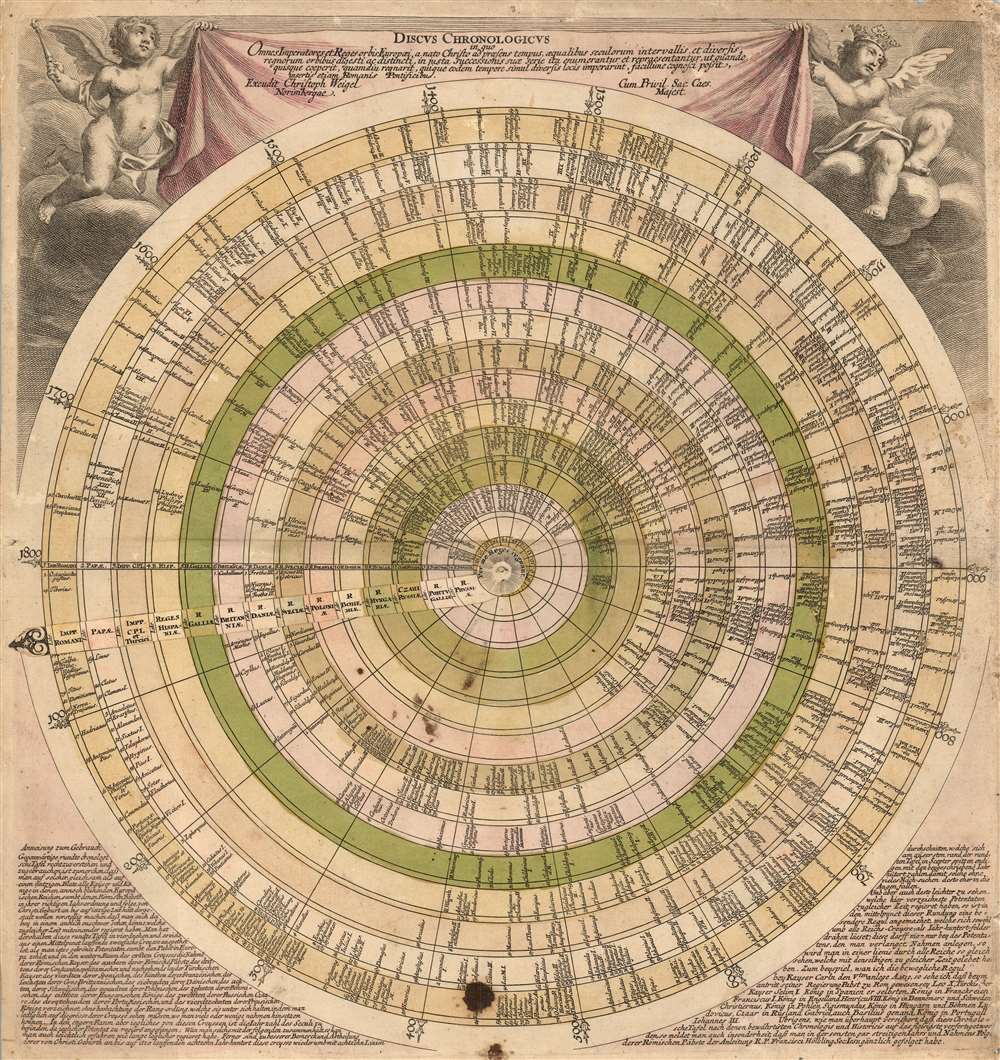 Europe's Kings, Emperors and Popes at a Glance.

This is Christopher Weigel's 1745 ingenious circular historical chart listing the reigns of the monarchs of Europe, as well as the Papacy, the Byzantine emperors and the Turkish Sultans. The chart lists fourteen categories of rulers chronologically from 1 CE to a potential limit of 1800 CE. A rotating volvelle - with each specific empire noted - allows the reader to rotate to see, at a glance, which monarchs reigned contemporaneously; each ruler's name is accompanied with the date of their coronation.

We are aware of several different states of this engraving, differing in the most recent reigns recorded in the 18th century; the earliest having a late date of 1719, the most recent coronation being that of Ulrika Eleonora of Sweden, but not that of her successor the next year. A further example has as its final entry the 1725 coronation of Catherine I of Russia. An example in the University of Bern has as its latest date the 1733 accession of Augustus II of Poland. The present example is later, with the most recent entry for Francis I (Franciscus Stephanus) of the Holy Roman Empire, who was crowned in 1745. The latest printing contains the 1775 coronation of Pope Pius VI.

The engraving's title cartouche is displayed atop the discus as a banner, suspended by two putti, one bearing a scepter and the other wearing a crown. The volvelle ends in an elegantly engraved finial. Where it is attached to the chart at its axis, it is engraved with a radiance meant to represent the deity. Around this reads the Latin motto, 'Per me Reges regnant' (Through Me, Kings Rule).

In the bottom corners of the engraving is an extensive German text, providing instructions for the use of the discus in order to see 'at one glance those who ruled at the same time... For example, when we put on the movable ruler at Emperor Charles V in 1519, we see that when he began his reign, Pope Leo X was in Rome, and Selim I was the Emperor of the Turks...'

This engraving was produced around 1720; the present example was amended no earlier than 1745. OCLC dates several examples as late as 1780, but lacking any evidence of the content we question such a late appearance. Some were separately issued; some appear to have been tipped into examples of Johann David Köhler’s school atlas, and may have been added to other composite atlases. We see eleven separate examples of varied dating appearing in institutional collections.