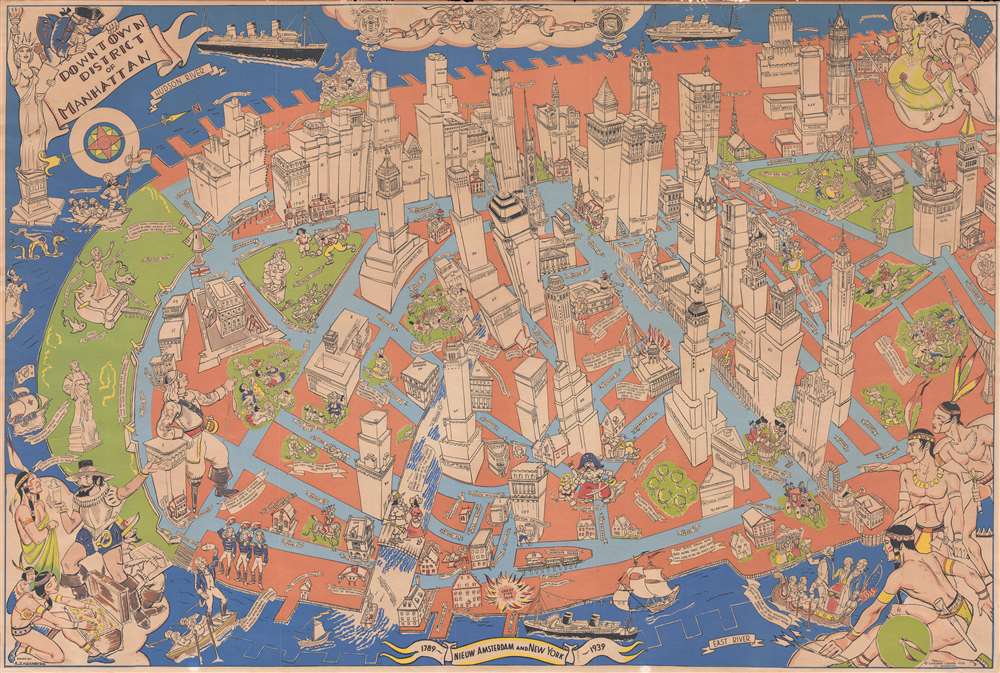 A striking pictorial map of Lower Manhattan featuring illustrations of the Woolworth Building, Singer Tower, and the Statue of Liberty.

This is a 1938 Arthur Zaidenberg pictorial map of Lower Manhattan in New York City. The map depicts a portion of the borough of Manhattan from Battery Park north to the intersection of Chambers Street and Broadway and from the Hudson River to the East River. Strikingly illustrated, buildings throughout 'downtown Manhattan', as Zaidenberg refers to the area, are drawn in profile. Most of the buildings are labeled, including the Singer Tower, the U.S. Customs House, Fraunces Tavern, City Hall, and the Woolworth building. Each building also bears its street address, allowing visitors to easily find the landmark building they want to see. Several buildings also reference when they were constructed, such as the Presbyterian Church on Wall Street (1719) and Castle Clinton in Battery Park (1807). Famous figures in New York's history are also included, such as Hudson and Verrazzano, two important early explorers who 'discovered' parts of the region. Statues of other historical figures are scattered throughout, including Washington Irving, George Washington, Nathan Hale, and Benjamin Franklin.

Vignettes of historical events also dot the map, such as the Battle of Golden Hill, George Washington leaving after bidding farewell to his generals in 1783, and Washington arriving for his inauguration as president in 1789. A vignette also adorns each corner: the title cartouche is situated in the upper left corner next to a striking illustration of the Statue of Liberty, two citizens from the era of the Revolution are included in the upper right corner, while a trio of Native Americans is illustrated in the lower right corner, and finally Peter Minuit is shown buying 'Manna-Hatin' on the lower left.

This map was drawn by Arthur Zaidenberg and published by Gardner Osborn of 120 Broadway in 1938. The map is rare, with the OCLC identifying only 3 holdings. We have identified additional examples at Stanford and at the Boston Public Library.

Arthur Zaidenberg (1902 - April 16, 1990) was an American painter, sculptor, muralist, author, and teacher. Born in New York City, Zaidenberg is perhaps best known for the classic art-instruction book Anyone Can Draw, published in 1938. He stated in his 'revolutionary' technique that anyone capable of writing the alphabet could combine simple shapes and draw. Zaidenberg also holds the distinction of being the first professor at New York University to used nude models in his life drawing class. Over the course of his career, Zaidenberg painted over 100 murals, including for the cruise ship Rotterdam and for the St. Moritz Hotel in Manhattan. He served in the Army Signal Corps during World War II making animated films. He lived in Woodstock, New York for at least thirty years before moving to San Miguel de Allende in Mexico in 1980, where he spent the last ten years of his life.