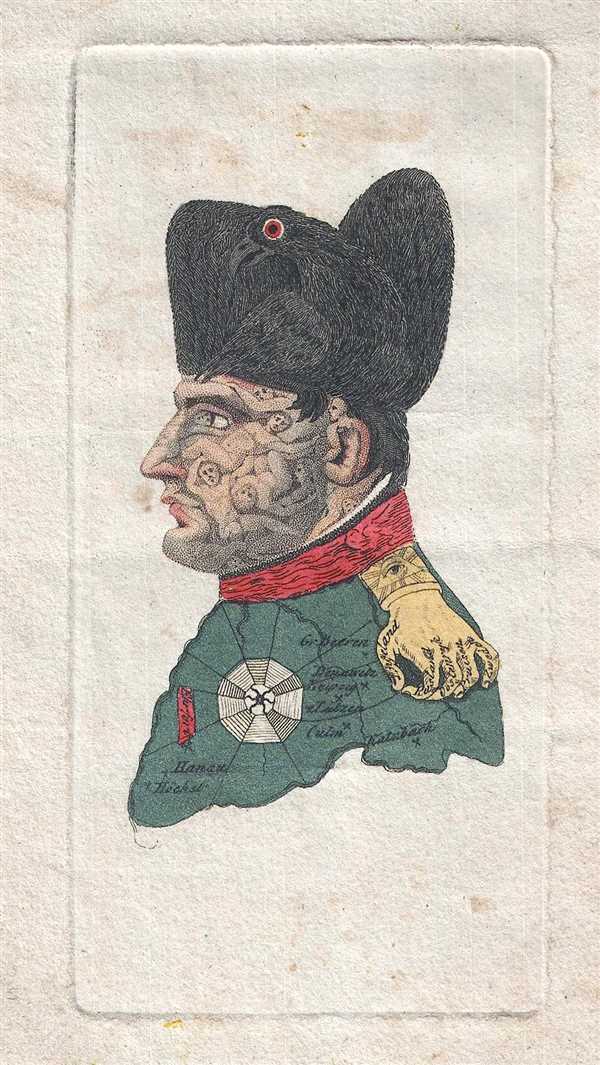 Dutch version of the most popular caricature of Napoleon Bonaparte - denouncing his villiany!
$500.00

This is an 1814 Evert Maaskamp caricature of Napoleon and political broadside attacking the violence and death perpetrated by the power-hungry despot. The caricature is based upon a portrait sketched by a Hanoverian artist named Heinrich Anton Dähling at a military parade in Berlin. The original caricature was created by Johann Michael Voltz in Germany in reaction to Napoleon's crushing defeat at the Battle of Leipzig in October 1813. The cartoon subsequently spread throughout western Europe, with Dutch, Italian, British, French, Spanish, and Swedish versions appearing over the next few years. While the allegorical meaning behind the caricature varies between the various different versions (in some countries there was even more than one version – there were two French and two Swedish versions for example), the overall message tends to stay consistent. Per A.M. Broadley's Napoleon in Caricature 1795 – 1821, one of the explanatory broadsides which accompanied the Dutch version reads

The Prussian Eagle is the Hat who, clinging to it,
Does not release its grasp of the head which it destines to fall.
The Corpses which are a proof of his ambition,
Victimised by the hundreds of thousands, are the features
Of the face. The Collar represents the stream of blood
With which the monster fed itself generously.
The Coat, a map, is marked at each place
With the loss of battles his pride never bargained for.
The dissolved Rhine Confederation threw over the reign of terror.
Even without the name of Ehrfurt, one can declare the Red Ribbon,
The brilliant badge of the Legion of Honour, nothing more that
A cobweb, the thread of which can easily be broken,
Covers in a ridiculous manner the whole Rhenish alliance.
In the Epaulette is discovered the hand of the Almighty,
Tearing up the web which enslaved Germany,
Where He kills the spider, whose poisonous power
Spread over the world, taunts God no longer.
The Spider occupies the place of the absent heart.

This political cartoon was printed and sold by Evert Maaskamp of 1 Dam en Kalverstraat, Amsterdam in 1814.

Evert Maaskamp (1769 - January 31, 1834) was a Dutch publisher and book and print merchant in Amsterdam from about 1800 to 1834. In addition to geographical publications and topographic maps and prints, he produced fantastically illustrated works on sheet metal. Over the course of his career, Maaskamp collaborated with Charles Howard Hodges, an English artist, whose influence is apparent in many of Maaskamp’s prints. Learn More...


Johann Michael Voltz (October 16, 1784 - April 17, 1858) was a German painter, graphic artist, and political cartoonist. Voltz apprenticed with the engraver and art dealer Friedrich Weber in Augsburg. He focused on battle scenes and other contemporary historical images. These include events of the Napoleonic wars, the wars of German War of Liberation against Napoleon, and the Greek War of Independence. Voltz was also known as a prominent German political cartoonist. His cartoons directed at Napoleon Bonaparte are still reproduced in history textbooks. His œuvre includes about 5,000 drawings and etchings. Learn More...

Very good. Blank on verso. Accompanied by two Dutch broadsides in which the print is described in verse.