1780 Bellin Map of the Horn of Africa, Southern Arabia and the Gulf of Aden. 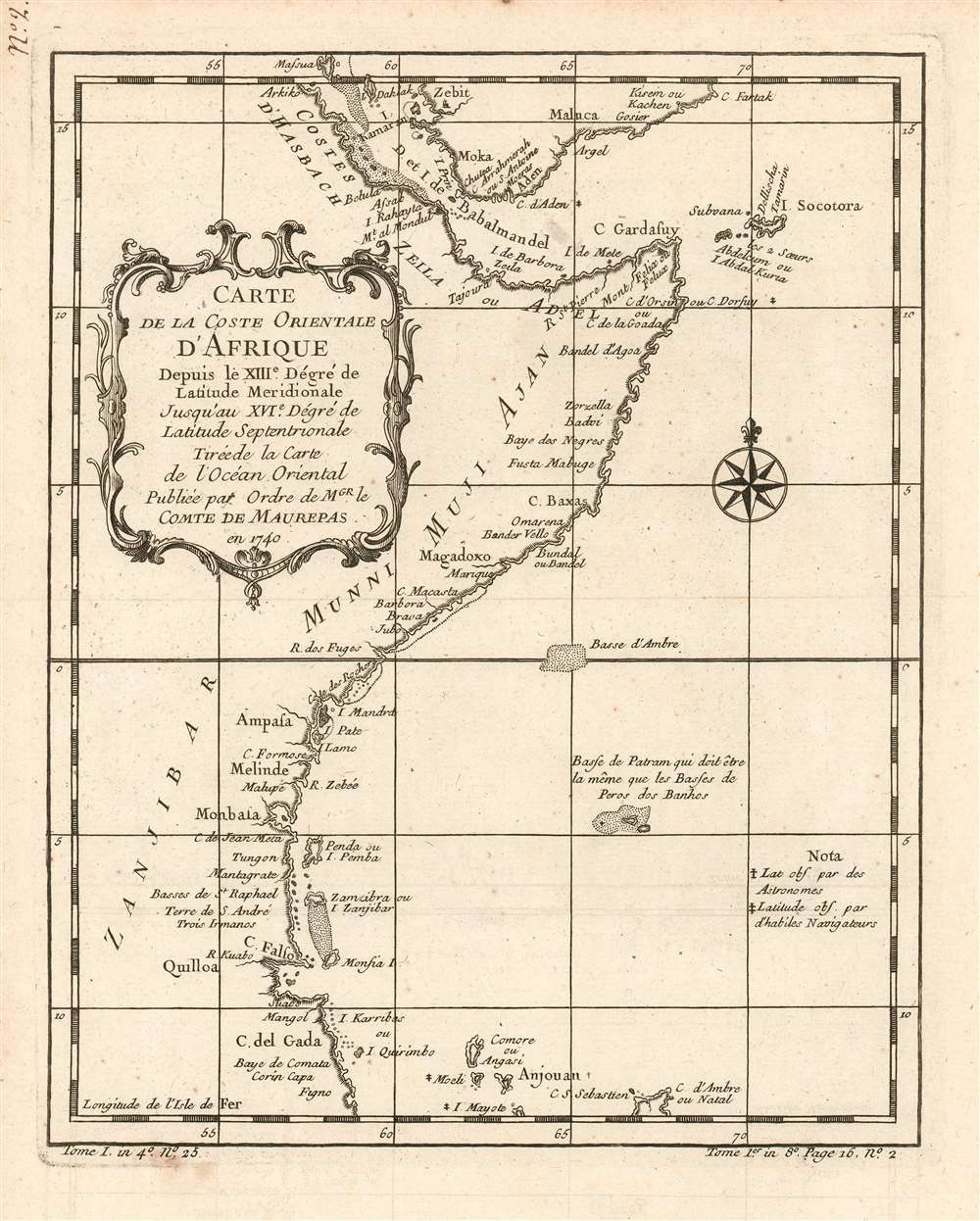 1780 Bellin Map of the Horn of Africa, Southern Arabia and the Gulf of Aden.

This is a 1780 Bellin map of the eastern coast of equatorial Africa and the southern coast of the Arabian Peninsula, starting at Cape Delgado in Mozambique and continuing to coastal Yemen. This little map is surprisingly well detailed. It names the Yemeni cities of Zabid (Zebit), Mocha (Moka), Aden, Al Mukalla, (Maluka on the map) Qusay'ir and Qishn (Gosier and Kisein or Kachen, respectively.) African place names include Quilloa (Kilwa) Mombasa, Mogadishu (Magadoxo), Bandarbeyla (Bandel 'Agoa on the map) and Āssab; Zanzibar is shown as well. The islands of Socotra, Comoros, Mayotte and the northernmost point of Madagascar also appear. The map includes notations indicating places whose latitudes had been observed by Astronomers, and those (much more numerous) having been observed by 'Skilled Navigators.' The map also shows areas of shallows, one named 'Basse (baixos) de Patram' which the cartographer notes 'must be the same as the Baixos de Pêro dos Banhos,' an atoll discovered by the Portuguese in 1513 noted for having had its avian population devastated by the arrival of some 165 castaways from the Portuguese ship Conceição in 1556.

Bellin drew the information for this chart from his own superb 1740 chart of the Indian Ocean, Carte Reduite de l'Ocean Oriental ou Mer des Indes Contenant Les Costes d'Afrique. It was this grand chart, and not the present lovely if narrowly-focused engraving, that was produced 'Par Ordre' of the Count de Maurepas. It seems slightly misleading that Bellin should here invoke this famous French statesman, naval strategist and spymaster, given that the present map was to appear in Harpe's 1780 Abrégé de l'histoire générale des voyages, which epitomized Prévost's Histoire générale des voyages - a work perhaps better known for its imaginative flourish than for its factuality. This map is notable, however, for its focus on the indigenous African national names that appear on it.

The map was included in Harpe's 1780 abridged edition of Prévost's Histoire générale des voyages. This map appears on the market from time to time, but OCLC lists only two copies of the separate map (at the Bayerische Staatsbibliothek and the Universitatbibliothek LMU Munchen) although inconsistencies in cataloguing mean this number may be higher. Prévost's Histoire and Harpe's abridged version of it are well represented in institutional collections.