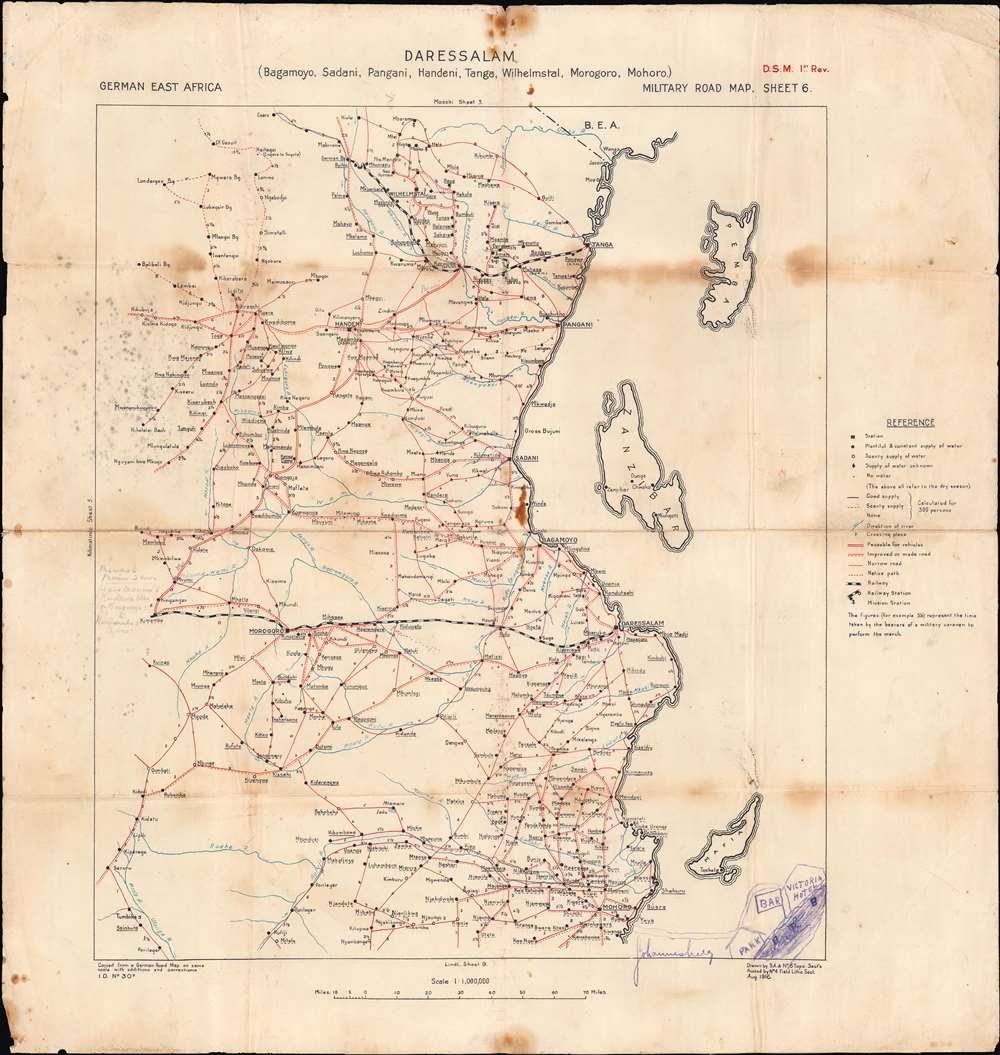 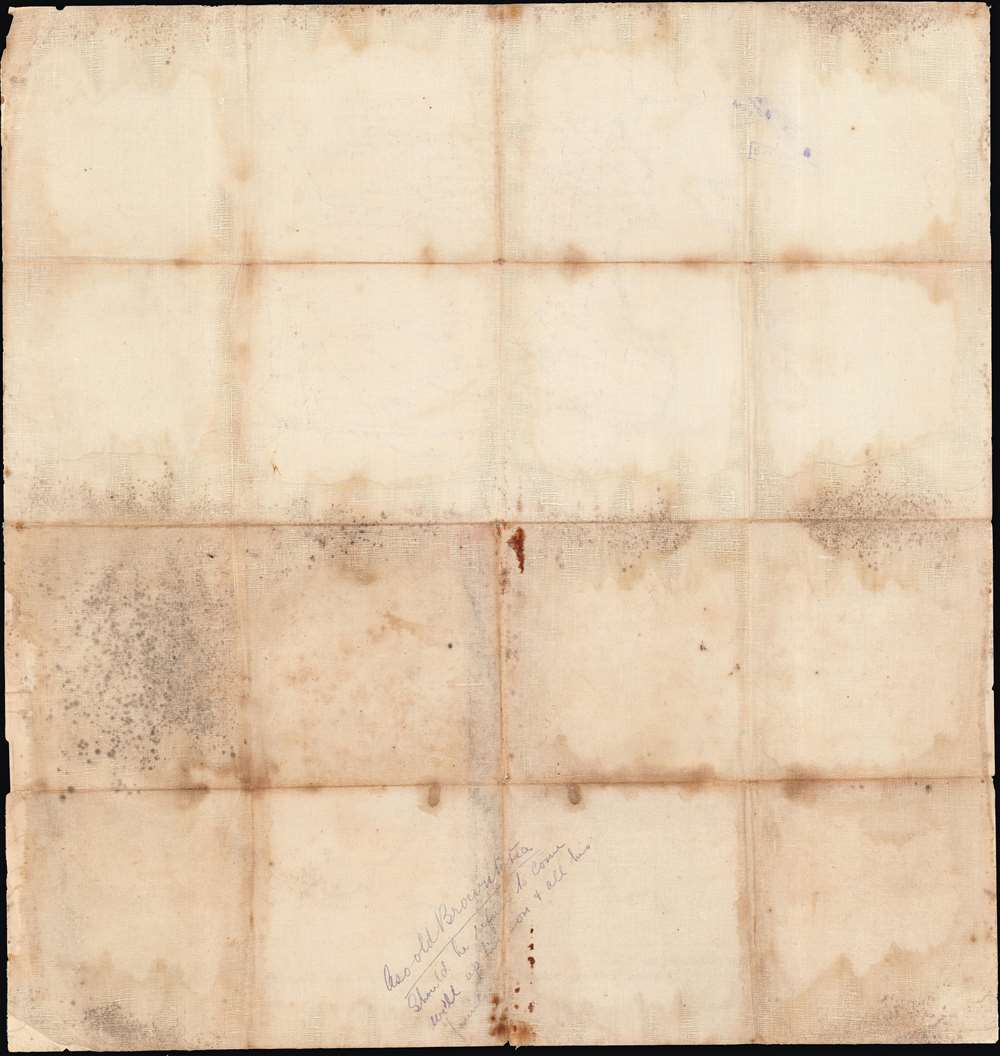 A unique relic of the WWI East Africa Campaign, this is an 1916 map by the British Ordnance Survey showing German East Africa, or modern-day Tanzania. It was used during the East Africa Campaign during World War I (1914 - 1918) and has several handwritten annotations suggesting field activity.

As indicated at bottom-left, this was copied from a German road map on the same scale with some additions and corrections, a common practice by Allied forces during the East Africa Campaign. Both major and minor roads are noted, along with two railway lines, the Usambara Railway at top and the Central Railway near center. According to the legend, the numbers along roads between settlements show the amount of time in hours it would take a military caravan to traverse the distance. It is also worth noting the close attention to water sources and their reliability, essential for any sort of military maneuvers in this terrain.

The map has several handwritten annotations, particularly around Mvumi at left-center, which show the distance from Mvumi to various towns nearby, including Mswero, which has been added to the map. At the bottom-right is a crude map of a section of Johannesburg showing the location of a bar near the Victoria Hotel (on Plein St.), suggesting that the true interests of the soldier who owned this map did not lie in fighting the Germans. The verso has a handwritten note that reads: 'Also old Browntotea[?] - Should he refuse to come we'll [ask/up?] his son and all his family.' Perhaps this refers to a local chief whom the British were courting?

Competition among Empires in East Africa

At the end of the nineteenth century, following the Berlin Conference of 1884 - 1885, European powers swamped Africa in a rush to claim colonies - what came to be known as the 'Scramble for Africa.' In East Africa, the British and Germans vied for influence after Germany established a presence from 1885 on the coast of Tanzania opposite Zanzibar. Over the following decades, German influence expanded until it covered most of modern-day Tanzania, Burundi, and Rwanda. During the First World War, these colonies became a target for the Allies, namely the British operating from Kenya, Uganda, and Rhodesia, the Belgians operating from the Congo, and the Portuguese in Mozambique.

Unlike the trench warfare on the Western Front, the conflict in Africa was defined by mobile frontier campaigns, fought largely by colonial troops (such as Indians for the British) and African conscripts called askari. In East Africa, the outnumbered German forces under Paul Emil von Lettow-Vorbeck (1870 - 1964) repeatedly defeated or otherwise tied down their foes with guerilla tactics, inspired by Lettow-Vorbeck's earlier battles against insurgents in German Southwest Africa. After bringing in reinforcements and drafting a massive labor force of porters, the British and Belgians launched a largely successful offensive in the spring of 1916 that resulted in the capture of most of German East Africa.

As infrastructure was limited, railways were critically important for armies to hold and control. The Central Railway from Dar es Salaam to Morogoro, and eventually to Tabora, was one of the most important objectives of the war in East Africa, and apparently the main concern of those who used this map. Morogoro, an important stop on the Central Railway, was captured in late August and it is likely that this map was used in the course of the campaign.

By September 1916, British troops controlled the railways and German troops had been pushed to the south, where they would hold out until the end of the war, continuing their effective use of guerrilla tactics and even launching offensives into Portuguese Mozambique and British Rhodesia.

The East Africa campaign is significant not only for the changes it brought to the region's geography and political arrangements, but because of the postwar activities of its major antagonists. Lettow-Vorbeck returned to Germany as a hero and helped to put down the Spartacist uprising in 1919. After being implicated in the failed Kapp Putsch of 1920, Lettow-Vorbeck left the army and later entered politics; he was oriented on the far right but had a difficult and testy relationship with the Nazis. For his part, the Allied commander Jan Smuts became the Prime Minister of South Africa and played an important role in the creation of the League of Nations and later the United Nations.

This map was published in August 1916 as part of a series of military road maps of German East Africa made by the British Ordnance Survey (OCLC 1176049597). As part of the collection, this map is held at a handful of universities and institutions in Europe, North America, and Australia. It has no known history on the market.

Good. Some dampstaining, wear on fold lines and along margins. Some foxing towards left margin.