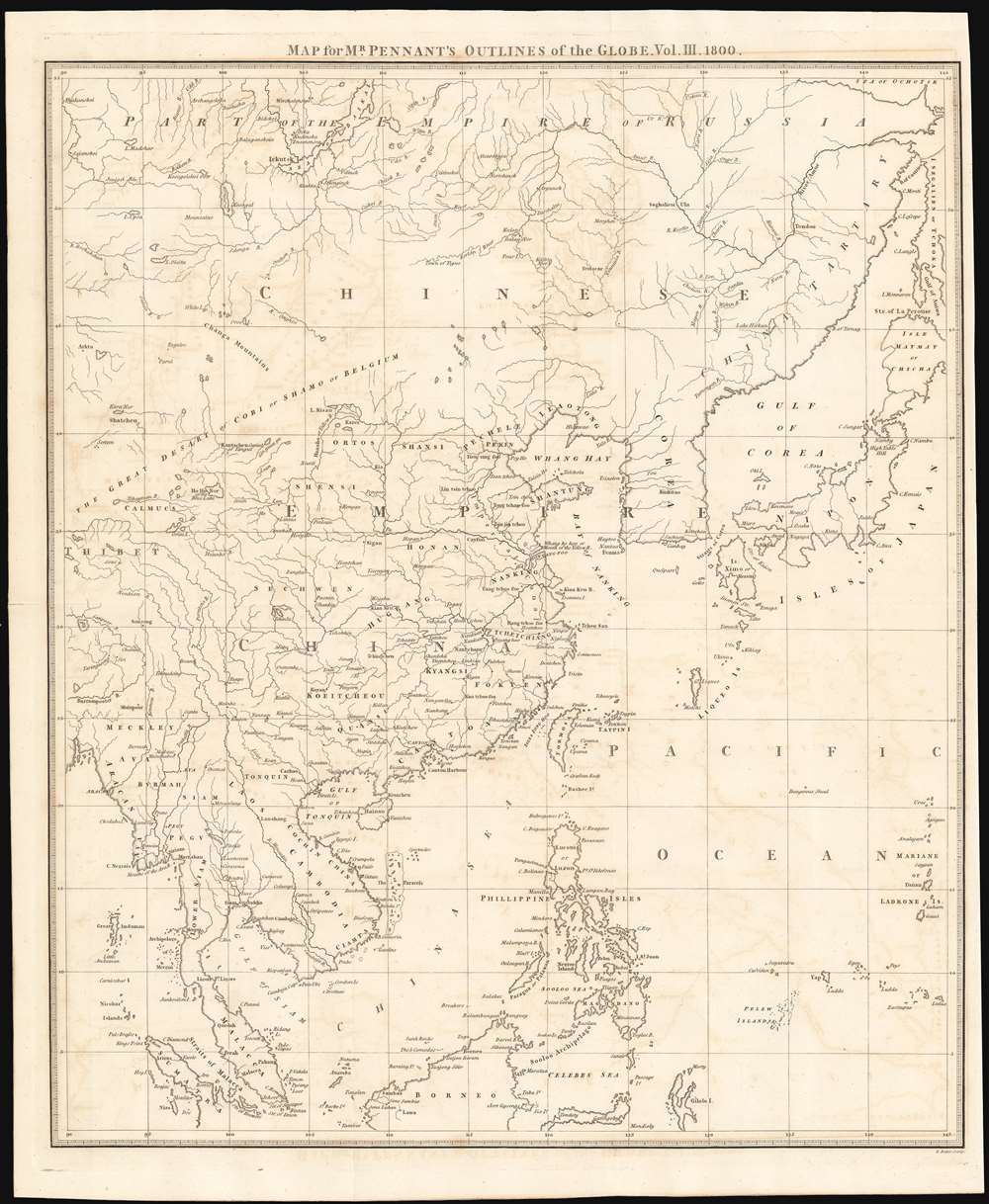 Printed in 1800 by David Pennant (posthumously on behalf of his father, Thomas) an elegantly engraved map of Southeast Asia, revealing a remarkably idiosyncratic view of the region to a British audience. It appeared in the posthumously-published third volume of Pennant’s Outlines of the Globe, which had been intended to extend to fourteen volumes. Each published volume was to contain a fold-out map. Pennant’s earlier works – travelogues of Scotland, Wales and England – had all been based on his own observations, but his ambitious and unfinished global project expected to draw on other travelers’ journals. Though many of the place names are quite recognizable, showing familiarity with contemporary geographical research, there are some that appear that baffle the modern reader. For example, the desert appearing north of China is labeled ‘The Great Desart or Cobi or Shamu or Belgium’ Even allowing for archaic spellings (Cobi) or archaic appellations (Shamu,) we are not aware of another similar use of the place name ‘Belgium.’

The sea between Japan and Korea, whose name, either the 'Sea of Korea,' 'East Sea,' or the 'Sea of Japan,' is here identified in favor of Korea Mer de Coree). Historically, Korea has used the term 'East Sea' since 59 B.C., and many books published before the Japanese annexed Korea make references to the 'East Sea' or 'Sea of Korea.' Over the centuries, neighboring and western countries have identified Korea's East Sea using various different terms. The St. Petersburg Academy of Sciences referred to the East Sea as 'Koreiskoe Mope' or 'Sea of Korea' in their 1745 map of Asia. Other seventeenth and 18th century Russian maps alternate between 'Sea of Korea' and 'Eastern Ocean.' The 18th century Russian and French explorers Adam Johan von Krusenstern and La Perouse called it the 'Sea of Japan,' a term that became popular worldwide. Nonetheless, the last official map published by the Russians name the East Sea the 'Sea of Korea.' The name is currently still a matter of historical and political dispute between the countries.

Though it was intended to extend to upwards of fourteen volumes, Pennant was able to publish no more than the first two prior to his death. His son, David, published the third and fourth volumes, each in a single edition; this map supplemented the third, entitled The view of India extra Gangem, China and Japan.

Thomas Pennant (June  14, 1726 - December 16 1798) was a Welsh naturalist, traveller, writer and antiquarian. Despite living his whole life at his family estate, in Wales, he earned fame as a travel writer. Twenty five published works are known, twelve of which had a geographical focus. His popular books on Scotland, the Hebrides, Wales, and London were based on his own travels. He conceived of a fourteen-volume project, his 'Outlines of the Globe,' which would encompass the rest of the world and for which he intended to draw on the observations of other travelers. Only two volumes appeared before his death, covering India and Ceylon. Volumes three and four, including Southeast Asia, China, Japan and Australia were published posthumously by his son, David. Learn More...