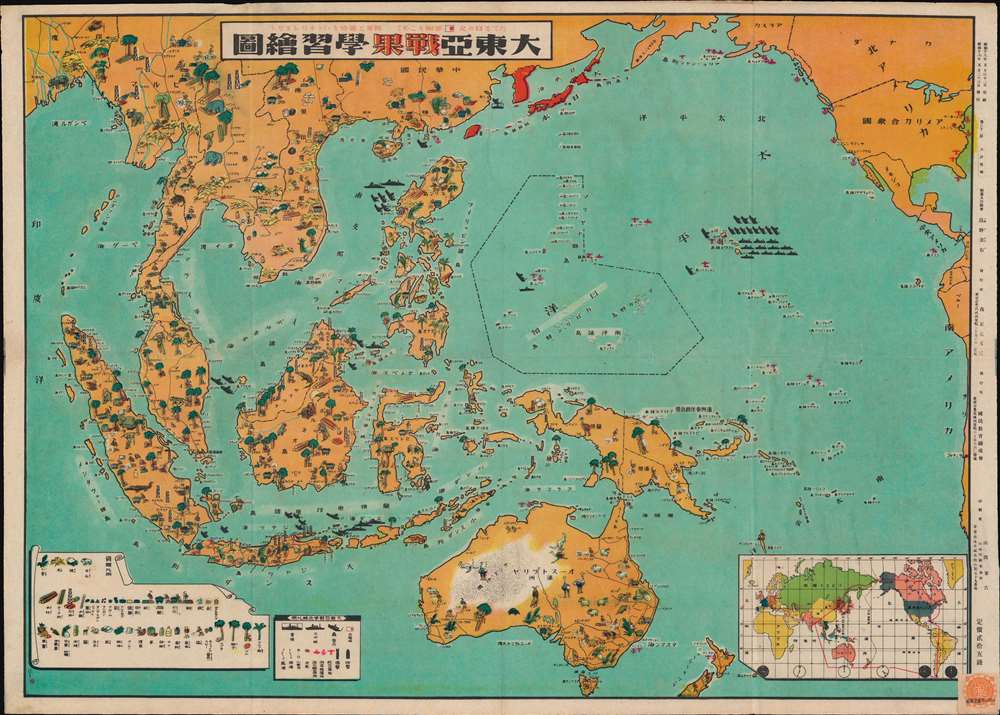 A striking 1943 (Showa 18) World War II Japanese Hatano Keisuke (畠野圭右) propaganda map of the Philippines, Southeast Asia, and the East Indies. Roughly centered on the Philippines, coverage extends from the Bay of Bengal to Florida and from Alaska to Tasmania. Sunken Allied ships are illustrated - as are active ships, and Allied air and sea bases. The purposeful distortion of scale serves to underscore the expansiveness of the Japanese Empire and the importance of the East Indian theater to its goals. The cartoonish aspect of the map, the beginnings of Japanese manga tradition, also make clear that it was intended for children. Some early editions of the map feature Japanese flags on captured territories - here they are absent, reflecting how, by 1943, the war had turned against the Imperial Japan and most of its early territorial gains were reversed.

The areas of significance to the map are those roughly corresponding to the Greater East Asia Co-Prosperity Sphere - the Philippines, Southeast Asia, the Malay Peninsula, Borneo, and the East India archipelago, are disproportionately enlarged, while the expanse of the Pacific, Australia, China, and the Japanese Empire itself, it correspondingly reduced. Southeast Asia and the East Indies were the most aggressively contested theaters of the Pacific War. Japan expanded aggressively into Southeast Asia and the East Indies throughout 1941 - 42 in an effort to secure valuable war resources - specifically mining riches, minerals, oil, rubber. The purposeful distortion also serves to undermine the treat of the United States by depicting it as both distant and small.

The Greater East Asia Co-Prosperity Sphere (大東亜共栄圏) was an imperial concept created and promulgated for occupied Asian populations during 1930-45 by the Empire of Japan. The concept was announced by Hachirō Arita on June 29, 1940. The Co-Prosperity Sphere was intended as a self-sufficient 'bloc of Asian nations led by the Japanese and free of Western powers.' It covered Southeast Asia, Eastern China, Manchuria, Japan, the East India Islands, and parts of Oceania. The idea promoted the cultural and economic unity East Asians, Southeast Asians, and Oceanians with the underpinning assumption that Japan, which had never been conquered and was the only Asian national to fully modernize was the 'Light of Asia.'

The Japanese Strategy in the Philippines

Just as the Philippines are central to this map, they were also central to the success of Japanese plans to dominate the Pacific. Not only was the archipelago rich in natural resources, including rubber, oil, mineral resources, and wood, it was also centrally located and well-positioned for expansion into the East Indies. Moreover, wresting control of the Philippines from the United States would effectively undermine the American ability to wage war regionally. The Japanese invasion of the Philippines commenced on December 8, 1941, one day after the December 7th, 1941 bombing of Pearl Harbor. While Japanese forces advanced quickly through the archipelago, like the Spanish before them, they promptly discovered that the hundreds of islands and limited infrastructure made the Philippines almost impossible to fully control. Nonetheless, the Japanese maintained a tenuous control of most of the Philippine Islands until 1944, when U.S. led Allied Forces began an aggressive and bloody campaign to retake the islands. Allied forces successfully drove the Japanese out of the Philippines in 1945.

This map was printed on May 22, 1943 (Showa 18), and issued shortly thereafter on May 28th. It was drawn by Hatano Keisuke (畠野圭右) and published by the National Education Training Association; a wartime propaganda organization focused on Japanese youth. This map was issued in at least 40 editions, this being the 31st - thus illustrating the war as it progressed. We have seen few other examples of this piece - of which this is the earliest.

Hatano Keisuke (畠野圭右; 1898 - 19??) was a Japanese illustrator, manga comic artist, and children's book writer active in the middle part of the 20th century. During the Pacific War (December 7, 1941 - September 2, 1945), 1ike most Japanese artists, Hatano's talents were harnessed developing graphic war propaganda. After the war, he continued to product children's cartoon art - or manga - well into the 1960s. Learn More...

Very good. Slight fold wear. Japanese tax stamp in the lower right corner.
Looking for a high-resolution scan of this?