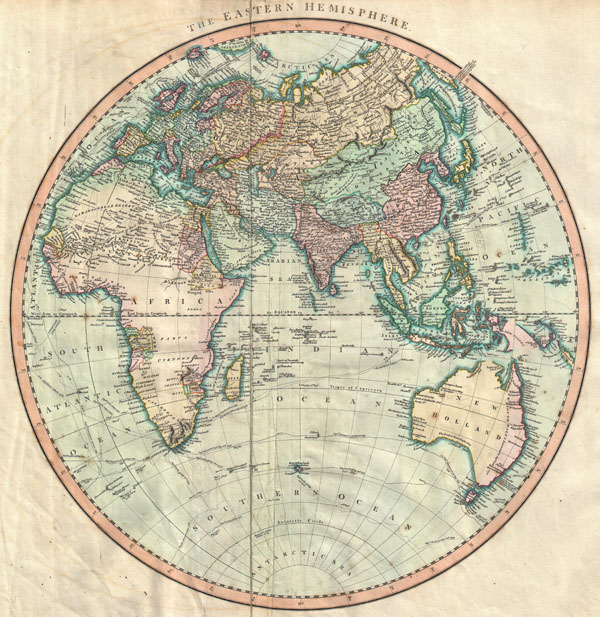 A very attractive example of John Cary's spectacular 1801 map of the Eastern Hemisphere. Covers the entirety of Europe, Africa and Asia, along with Australia, the Indian Ocean, and parts of Polynesia. Europe is mapped according to early 19th century form. Africa, mostly labeled 'Parts Unknown' covers much of the left hand portion of the map. Caravan trails and oases fill the Sahara. Morocco, Egypt, Nubia and Abyssinia are noted. Maps the Portuguese colonies in the Congo as well as their fledgling colonies in east Africa, near Madagascar. These, including the Kingdom Of Monomotapa (Mutapa), have been associated with the legendary Land of Ophir or King Solomon's Mines. King Solomon's mines were a kind of Africa El Dorado, and like El Dorado, they were ultimately relegated to the province of myth. On the opposite side of the Map Australia is labeled 'New Holland.' The eastern portion is highlighted in red and labeled New South Wales, referencing claims to the land issued by Captain Cook in 1770. The northern parts of Australia as well as parts of New Guinea and the East Indies are left with uncompleted borders suggesting their unexplored state. The routes and discoveries of important explorers are noted throughout and crisscross the seas. All in all, one of the most interesting and attractive atlas maps Eastern Hemisphere to appear in first years of the 19th century. Prepared in 1801 by John Cary for issue in his magnificent 1808New Universal Atlas.