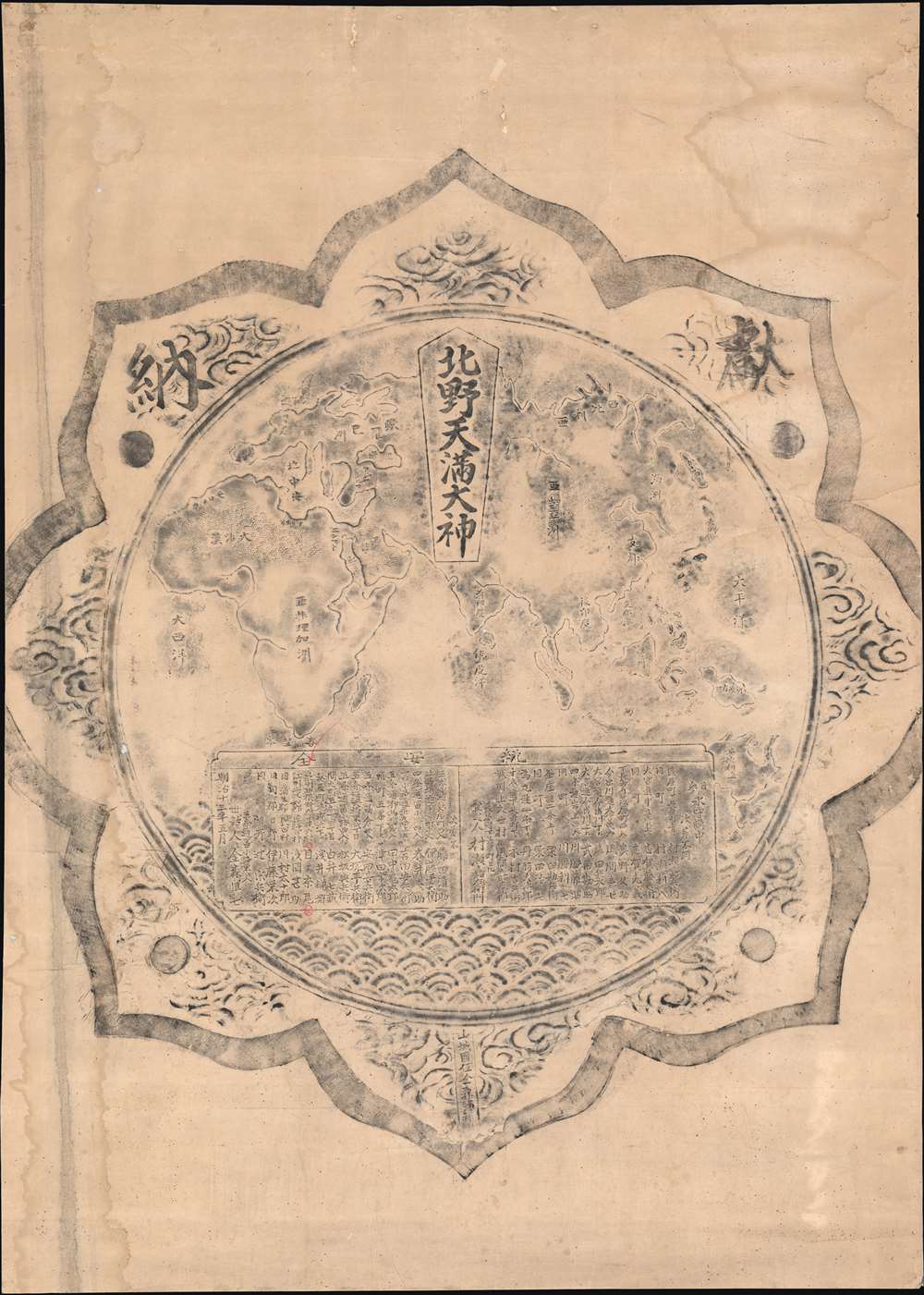 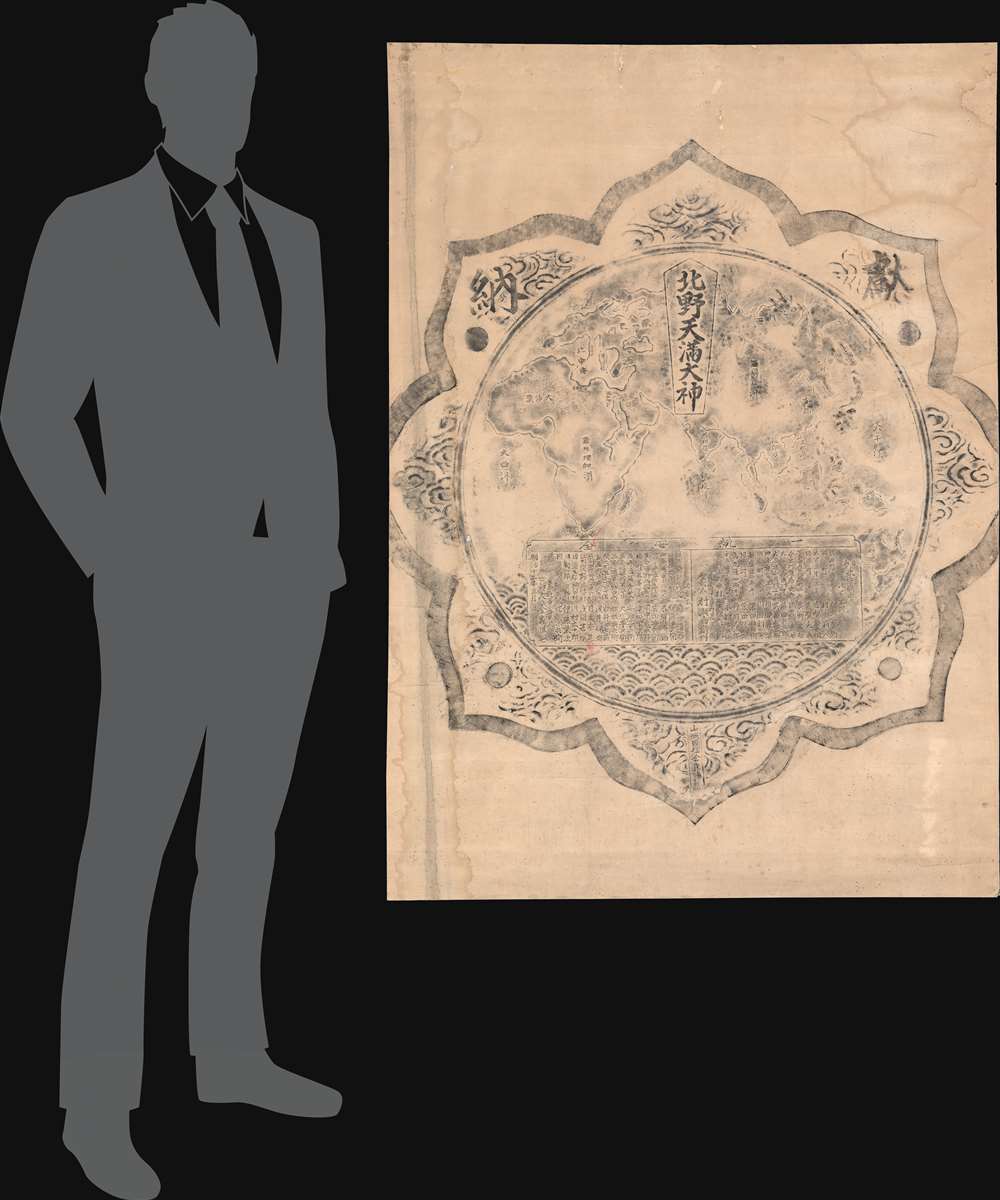 This is a unique rubbing of a Meiji 13 or 1880 Eastern Hemisphere map from a carving on the back of a bronze mirror at Kitano Tenmangū Shrine, Kyoto. The mirror and the map were given by the Nissan Nagamori-kō to the Kitano Tenmangū Shrine in 1880. Nonetheless, the map was forgotten until 2015, when rediscovered by shrine caretakers, but this rubbing dates to the early Meiji, shortly after the mirror-map was carved. This rubbing was thus likely done for or by one of the Nissan Nagamori-kō, or possibly a pilgrim to the shine shortly after it was donated, but before the mirror was mounted - hiding the map and making all further rubbings impossible.

The mirror has stood at the shrine entrance since 1880, and remains there to this day. The map was carved on the reverse-side, but subsequently hidden behind the mounting. It was consequently forgotten and lost until 2015. At that time, another example of this rubbing was discovered in the shrine's storehouse. Tenmangū caretakers recognized the shape of the mirror from the rubbing, and understood that it must have come from a carving on the mirror's verso. The mirror was moved and the map carved on the back rediscovered - creating something of a news sensation.

The map, embraced within a mandala form, roughly covers the Eastern Hemisphere, including Africa, Europe, Asia, and, at bottom-right, Australia. The large characters in the top-left and top-right corners are 納 and 獻, both indicating that the map an offering to the shrine and its kami.

Reflecting the time and context of its production, some elements of the map are very up-to-date, and others are oddities inherited from the Tokugawa period. For example, the Indian subcontinent is referred to as 前印度 and mainland Southeast Asia as 后印度, likely from the Dutch 'Vorderindiën' and 'Achterindiën', respectively. Under the Tokugawa Sakoku isolationist policies, the Dutch were the only Europeans granted trading access to Japan and therefore had a great influence on Japanese cartography of foreign places.

The box at bottom-center lists the names and hometowns of thirty members of Nissan Nagamori-kō (日参永守講), the devotional group that donated the mirror, including Murase Kaemon (村瀨嘉右衛門), who is also listed as the map's creator. On this rubbing, a manuscript arrow and two circles highlight one of the names, perhaps one of their Nissan Nagamori-kō ancestors?

Kitano Tenmangū (北野天満宮) is an over 1,000-year-old Shinto shrine in Kyoto dedicated to the virtuous poet, scholar, and government official Sugawara no Michizane (菅原道真). After his death, Michizane was deified as Tenjin (天神), the kami of learning (学問の神様). Although initially associated with natural disasters and considered vengeful (onryō), Tenjin evolved into a more benevolent spirit (goryō) and the most prominent of the kami dedicated to learning and scholarship.

The Kitano shrine in Kyoto is one of 14,000 or so Tenmangū that enshrine Tenjin, and is one of the Sōhonsha (head shrines) among the Tenmangū, as well as one of the Three Great Tenjin Shrines (日本三大天神).

Japan in the Meiji Era - Branching Out into the World

This map was produced during Japan's dramatic Meiji modernization drive. It epitomizes the new information and knowledge of the outside world then reverberating throughout Japanese society, beyond the circles of government officials and academics in Tokyo, down to the general public. The members of Nissan Nagamori-kō may have wished to demonstrate their synthesis of traditional beliefs with modern science, a fashionable intellectual trend in the Meiji Era.

The engraving of images and designs on the back of mirrors was a well-established practice in East Asia by the Tokugawa period. During that time engraved bronze mirrors became a common gift, especially for weddings. Map engravings, nonetheless, are quite rare. That being said, the Kitano Tenmangū also has a mirror-engraved map of Japan (古鏡裏摺本日本圗), dedicated to the powerful daimyo Katō Kiyomasa (加藤 清正) from early Edo.

The bronze source engraving, still at Kitano Tenmangū Shrine, was drawn by Kanamori Yasuke (金森弥輔) and by Murase Kaemon (村瀨嘉右衛門). There are two known surviving c. 1880 rubbings, one at the Kitano Tenmangū Shrine that was discovered in 2015, and the present example, likely from the estate of one of the original Nissan Nagamori-kō donors.

Kanamori Yasuke (金森弥輔; fl. c. 1879 - 1881) was a native of Yamashiro Province who engraved a world map on the back of a large mirror housed in the Kitano Tenmangū (北野天満宮), a prominent Shinto shrine in Kyoto dedicated to Tenjin (天神). Learn More...


Murase Kaemon (村瀨嘉右衛門; fl. c. 1879 – 1881) was a Japanese publisher involved with the production of a world map engraved on the back of a large mirror housed in the Kitano Tenmangū (北野天満宮), a prominent Shinto shrine in Kyoto dedicated to Tenjin (天神). Learn More...

Very good. Some damp stains towards top-right and left margins. A handful of small wormholes at various points.