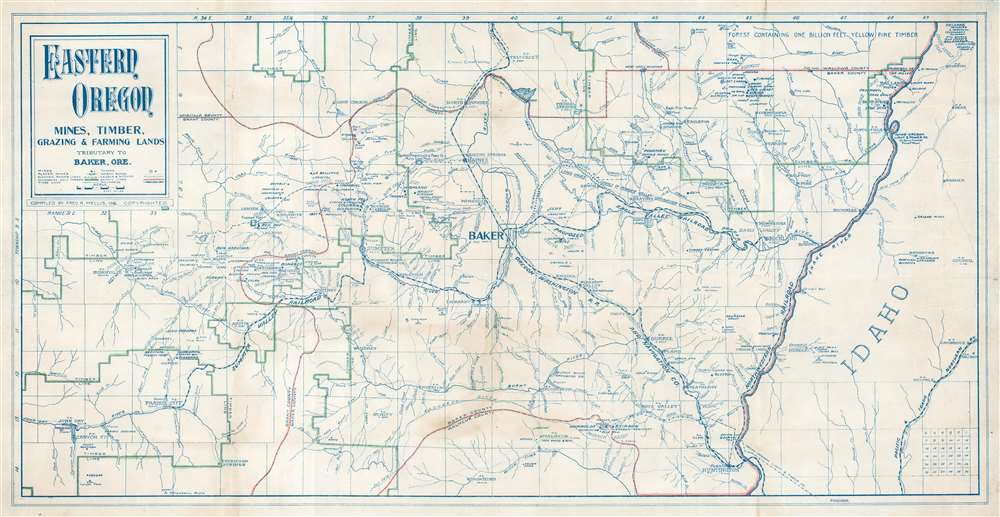 This is a fascinating 1916 Fred R. Mellis map of eastern Oregon, capturing the height of an early 20th century gold mining and logging boom. The map focuses on Baker, at the time developing as the center of regional mining, timber, and agricultural industries. As a diazo (reverse blueprint), the map can only have been issued in small quantities and its annotation of industry, transport networks, and electrical and irrigation networks suggest it was made for administrative use.

Baker City, Oregon - A Center for Industry and Trade

Gold was discovered in eastern Oregon in 1861. Prospectors and fortune hunters flooded into the region, founding Baker City as a regional supply, transport, and commerce hub. Baker City was incorporated in 1874, initially little more than a station on the Salt Lake, Portland-Dalles and Salt Lake Railroad. Ten years later, in 1884, it was connected to the Oregon Short Line. The Sumpter Valley Railroad began construction in 1896, followed by the Transatlantic in 1897. Multiple railroads facilitated access to mines and rich timber country. Both industries flourished in the subsequent decades, and by 1900, transformed Baker into the largest city between Salt Lake City and Portland with modern amenities including electric lights, a street car system, a grand hotel, and an opera house.

The old growth forests north and west of Baker City supplied the ever-hungry mining and building industry. Six mills opened in Baker, manufacturing something on the order of 55,000,000 feet of lumber annually. As the city grew, the barren surrounding lands were harnessed for agriculture and grazing. Some companies like the Powder River Land and Irrigation Company watered more than 100,000 acres.

The map highlights eastern Oregon's impressive economic potential. Manuscript highlights the timber lines, and dots mark mines, all of which are named. The Sumpter Valley Railroad extending west connects Baker to Sumpter and Prairie City, while the line of the Oregon - Washington Railroad and Navigation Company traverses the map diagonally from the lower right. Two proposed routes for the Eagle Valley Railroad head east from Baker, but it appears not to have been built. Electric power lines, canals, and ditches throughout are identified by the operating company.

This map was compiled and copyrighted by Fred R. Mellis in 1916. We note a single cataloged example, located at the University of California - Berkeley.

Fred R. Mellis (November 1854 - June 28, 1922) was an Austrian-American real estate agent who was also involved in mining and insurance. Born in Austria, Mellis arrived in the United States in 1873. Mellis settled in eastern Oregon, eventually in Baker, where he worked in real estate and mining. Mellis was the president of the Oregon-Idaho Investment Company which dealt in mining property in southern Idaho and eastern Oregon. Mellis was involved in Oregon's displays at several world's fairs (including in Paris, St. Louis, and San Francisco). We have learned from newspaper articles that Mellis owned one of the finest collections of minerals in the Pacific Northwest around the turn of the 20th century. Per an article in the Oregon Daily Journal from September 13, 1919

Mellis has been accumulating gold specimens for 15 years in Baker and Grant counties, and has acquired a display regarded as the best private collection on the Pacific coast, and the best exhibit in the entire Northwest. It is on exhibition at the Bater Loan and Trust company bank here [in Baker, Oregon], and has long been a center of interest to mining men. Both free gold nuggets and quartz specimens are included in the collection.