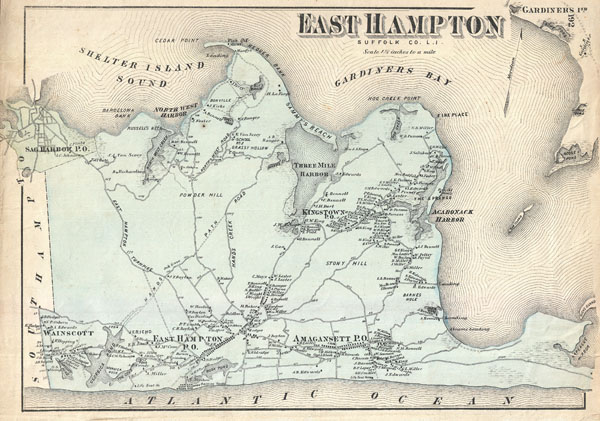 A rare example of Fredrick W. Beers' Map of East Hampton, Long Island, New York. Published in 1873, this magnificent map covers the south fork of Long Island from Sag Harbor toe Napeague Harbor and Gardiners Island. Includes the communities of Wainscott, Sag Harbor, East Hampton, Amagansett and Kingston, as well as Acabonack Harbor, North West Harbor and Three Mile Harbor. Beers maps are highly desirable for their superb detail down to the level of individual buildings and household family names. Prepared by Beers, Comstock & Cline out of their office at 36 Vesey Street, New York City, for inclusion in the first published atlas of Long Island, the 1873 issue of Atlas of Long Island, New York.

New York Public Library, Map Division, 1527359.
Looking for a high-resolution scan of this?