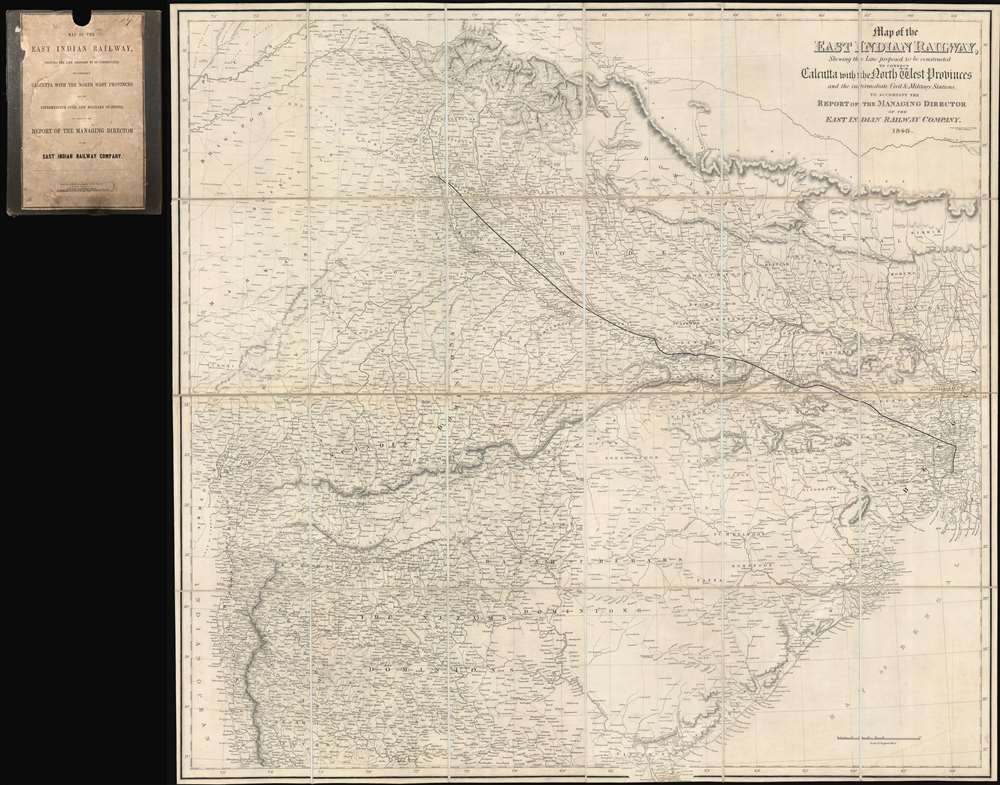 The birth of the Indian Passenger Railway system! First railroad map of India.

In all likelihood, the first railroad map of any part of India. Illustrating a transformative moment in the infrastructure development of India, this is rare and important 1846 John and Charles Walker map northeastern India, defining the course of one of India's first passenger railroads. Published one year after the East India Railroad Company (EIR) was founded, this map was intended to raise funds and political support for their flagship initiative, a passenger and freight railroad connecting the port of Calcutta, then the economic capital of India, with the inland administrative center of Delhi. This is, in short, one of the most significant and influential maps relating to the early planning of the Indian railroad system ever published.

The East Indian Railway was the brainchild of Rowland MacDonald Stephenson (1808 - 1895). Until the 1845 rail transport in India was limited to short distance industrial lines, but Stephenson imagined a great network of passenger trains running throughout the subcontinent. Stephenson published an 1844 article in a popular daily, The Englishman, proposing a broad network of passenger railroads throughout India that, he argued, were ideally planned to be most advantageous to the subcontinent. The proposal achieved some initial funding and in 1845, Stephenson, along with three assistants, traveled to India and 'with diligence and discretion' surveyed, statistically studied, and costed the potential traffic for a railway route from Calcutta to Delhi via Mirzapur. They assessed that the maximum cost of a twin-track line at roughly £15000 per mile.

Stephenson returned to England, where he was able to secure the support of the East India Company and additional financing. There he also commissioned the firm of J. and C. Walker to compile a large map, the present offering, illustrating his survey work and bold plans for the Calcutta - Delhi line. Using the map to lure additional investment, Stephenson secured the permission to raise £4,000,000. Although raising the necessary funds took several years, the EIR was contracted by the East India Company to begin railway construction until 1849 when it became one of the three companies (The East India Railway, the Madras Railway, and the Great Indian Peninsular Railway) sanctioned to construct experimental lines. The EIR opened its first section. from Howrah to Hooghly in 1854. The East India Railway reached Delhi until 1864, becoming one of the first major railroad lines in India, and the first to connect these distant cities.

This was engraved and printed by John and Charles Walker (J. and C. Walker) on behalf of the East Indian Railway Company. Examples are extremely rare. We have identified copies at the British Library, the University of Minnesota, and the National Library of Scotland. No previous history on the private market.