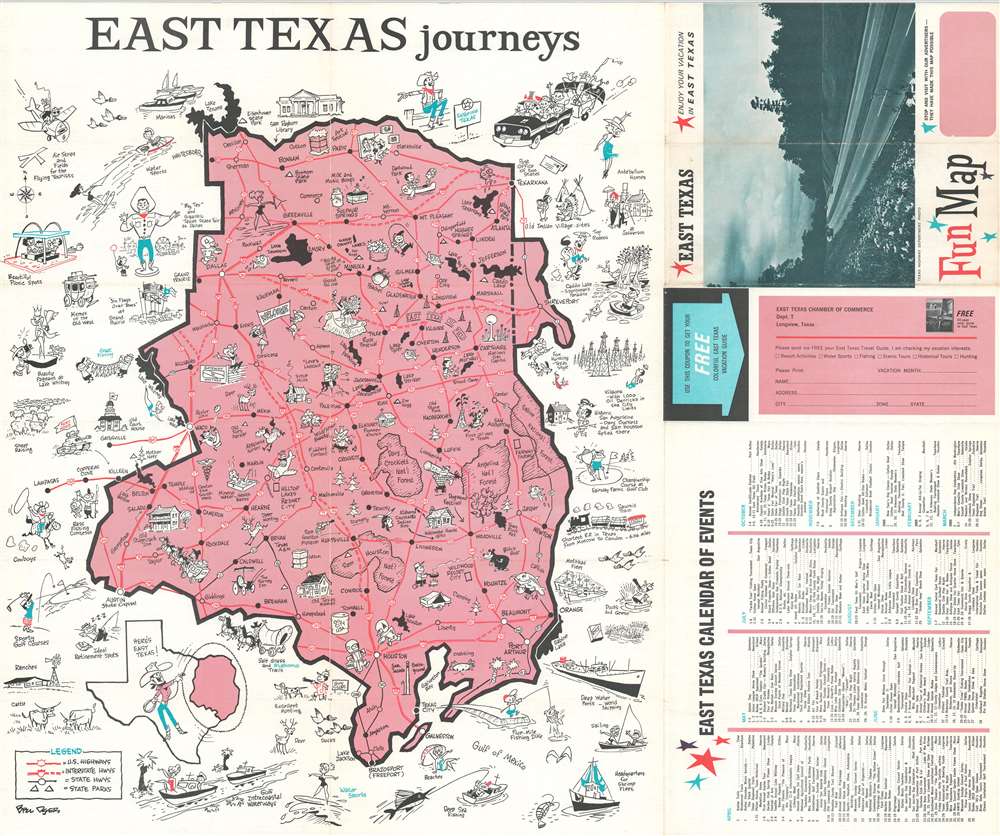 This is a 1964 Bill Dyer pictorial map of East Texas. Dyer charmingly combines many aspects of life in East Texas. Here East Texas is shaded pink and a cowboy situated in the lower left is illustrated lassoing East Texas to allow viewers a better idea of exactly which part of the massive state this is. The state's obsession with football is highlighted by illustrations of both the Dallas Cowboys and Houston Oilers. There are also multiple depiction of hunting and fishing and oil derricks. Cities and towns are labeled throughout, including Dallas, Austin, Houston, and Galveston. Houston, while home to the Oilers, is also indicated by an eager NASA astronaut. The natural wonders of East Texas, and the outdoor lifestyle enjoyed by many, are highlighted through vignettes of fishing, riding, golfing, surfing, and sunbathing on its many beaches and lakes. 'Big Tex', an annual landmark of the Texas State Fair, appears near Dallas. A calendar of events in the area is included along the right, in the hope that this will pique someone's interest and encourage a visit.

This map was created by Bill Dyer and published by the East Texas Chamber of Commerce in 1964. We have been unable to locate other surviving examples.

William Haskel 'Bill' Dyer (December 12, 1912 - October 30, 1976) was an American cartoonist and artist best known for his comics in the Knoxville News-Sentinel. Born in Johnson City, Tennessee, Dyer began drawing at the age of six or seven and never took a formal drawing class in his life. He simply had natural talent. Dyer attended Science Hill High School, where his art teachers appreciated and fostered his talent, before earning a football scholarship to Washington and Lee University. He became an All-Southern Conference tackle while at Washington and Lee, but still had to work at a bookstore to pay for room and board. Scholarships during the Great Depression, particularly in the early 1930s, only paid for tuition. While at Washington and Lee, Dyer majored in journalism and also drew cartoons for the student newspaper. After graduating in 1935, he began working at the Knoxville News-Sentinel, after the late John H. Sorrells, then the executive editor of Scripps-Howard, which still owns the Knoxville News-Sentinel to this day, suggested to the then editor of the News-Sentinel Marshall McNeil, that he should hire Dyer because he admired and liked his work. Dyer started in the sports department at the News-Sentinel and covered high school football, sometimes reporting on the same games that he officiated, though it was never reported in a story with his byline that he had also been a referee at the game. Eventually, Dyer's editor, Loye W. Miller, recognized Dyer at one of the games while he was officiating, and the following game the News-Sentinel's story covering the game bore Dyer's byline. After Loye confronted Dyer about this, his only response was 'How could you cover it better than from down there on the field?' Thus, Dyer continued covering high school football games in this way until he was called up to serve in the U.S. Navy during World War II, for whom he created propaganda posters. After the war, Dyer returned to the News-Sentinel and wanted to cover University of Tennessee football, but all the writing spots were already filled. His editor suggested that he come up with some sort of cartoon to describe the games, and thus the Dyergram was born. The Dyergram, perhaps Dyer's most beloved cartoon, was a series of four illustrations of a football field that chronicled each play of the game by quarter and grew to be the most popular feature in the sports section. His work was also featured on Sundays in a half page five-column-wide comic entitled 'What Life' that provided a view of an event, or a series of events, from the previous week. Another feature in the Sunday paper was called the 'Nameless Cartoon' and was a contest in which readers competed to submit the best title for that week's cartoon and would receive the original cartoon and $2. Dyer also was available to create cartoons for other stories in the paper outside the sports section. Dyer would receive an article and be free to create the comic as he saw fit because 'Bill's own idea is better 99 times out of 100'. Over the course of his career, Dyer also taught cartooning at the University of Tennessee at night (although he stopped doing so out of a realization that he was training people that could potentially come asking around for his job), created the cover for the University of Tennessee's football brochure, and every year he created the Christmas card sent out by the University of Tennessee Athletic Association. Dyer married his wife Elizabeth on December 8, 1936, with whom he had two children, a son and a daughter. Learn More...

Very good. Exhibits light toning. Verso repairs and reinforcements at fold intersections. Text on verso.
Looking for a high-resolution scan of this?