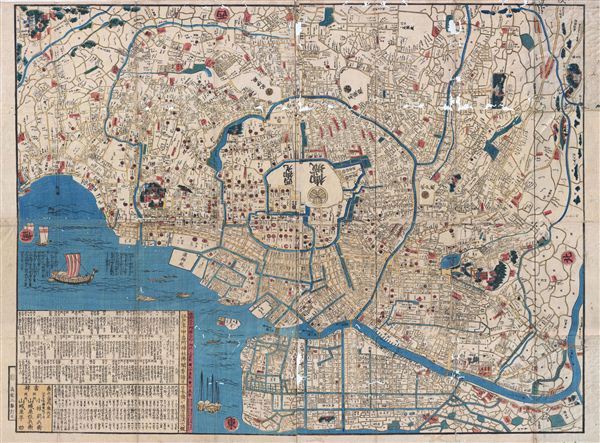 A fine Tokugawa Period map of Edo or Tokyo, Japan.

This extraordinary item is a hand colored Tokugawa Period woodcut map of edo, or Tokyo, Japan by Sanyu Takashiba. Impressive size and detail, this map is oriented to the east. The map shows the land tenures of various daimyo and hatamoto - Japanese feudal lords. It further illustrates important temples, shrines, and other public sites in pictorial relief. Produced in the mid-19th century Japanese woodcut style, this map is a rare combination of practical and decorative. Ships and waves decorate the harbor and there is no specific directional orientation. All text seems to radiate from the palace at the center of the map. Folds into its original sideboards.

Japanese maps of Tokyo, like this one, were recently the subject of a stir in the media and an unexpected backlash from the Japanese government and equal rights groups. When Google added a collection of rare 18th and 19th century Japanese maps from the Berkley collection of Tokyo or edo to it's the Google earth Geo-Browser it revealed the modern locations of a number of forgotten Burakumin Villages. The Burakumin are a social minority group labeled as 'outcasts' under old Japanese caste system. This system, which dates to the early days of the feudal shogun era, identified the Burakumin as 'untouchable' due to their employment in death related professions such as gravediggers, undertakers, embalmers and leather workers. Burakumin were believed to have been 'tainted by death' and thus unlucky. Though the caste system was legally abolished in 1871, some residents feared that the satellite overlays and relative availability on this information on Google earth will enflame a new wave discriminatory activity against the Buraku.

Very good. Map exhibits typical wormholidng here and there as well as wear on original fold lines. Else a nice example.
Looking for a high-resolution scan of this?