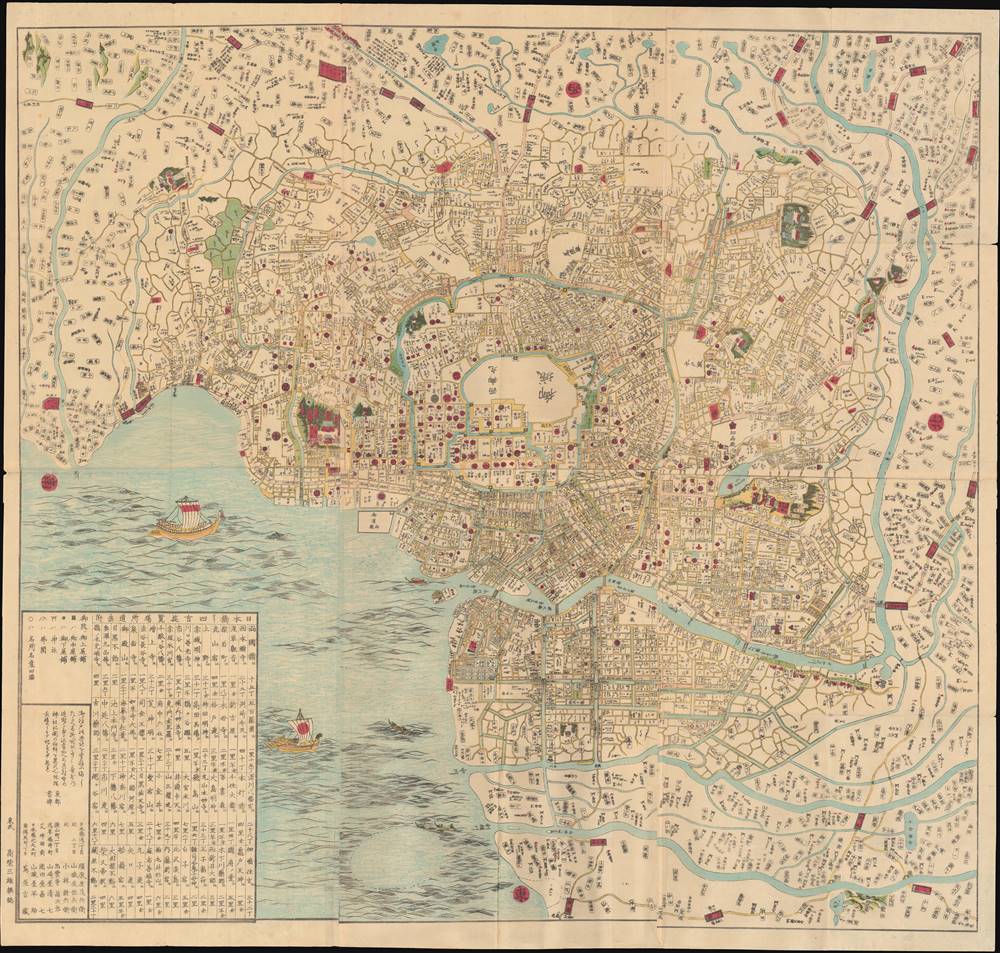 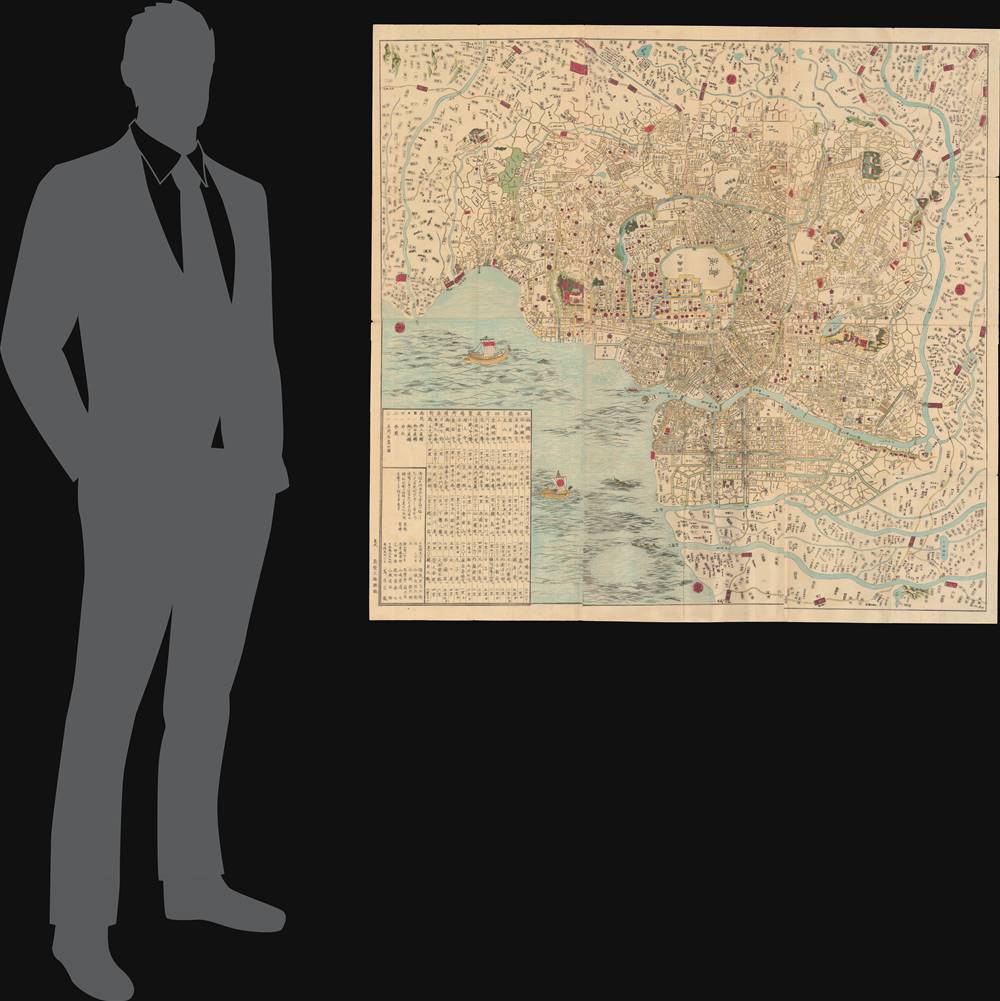 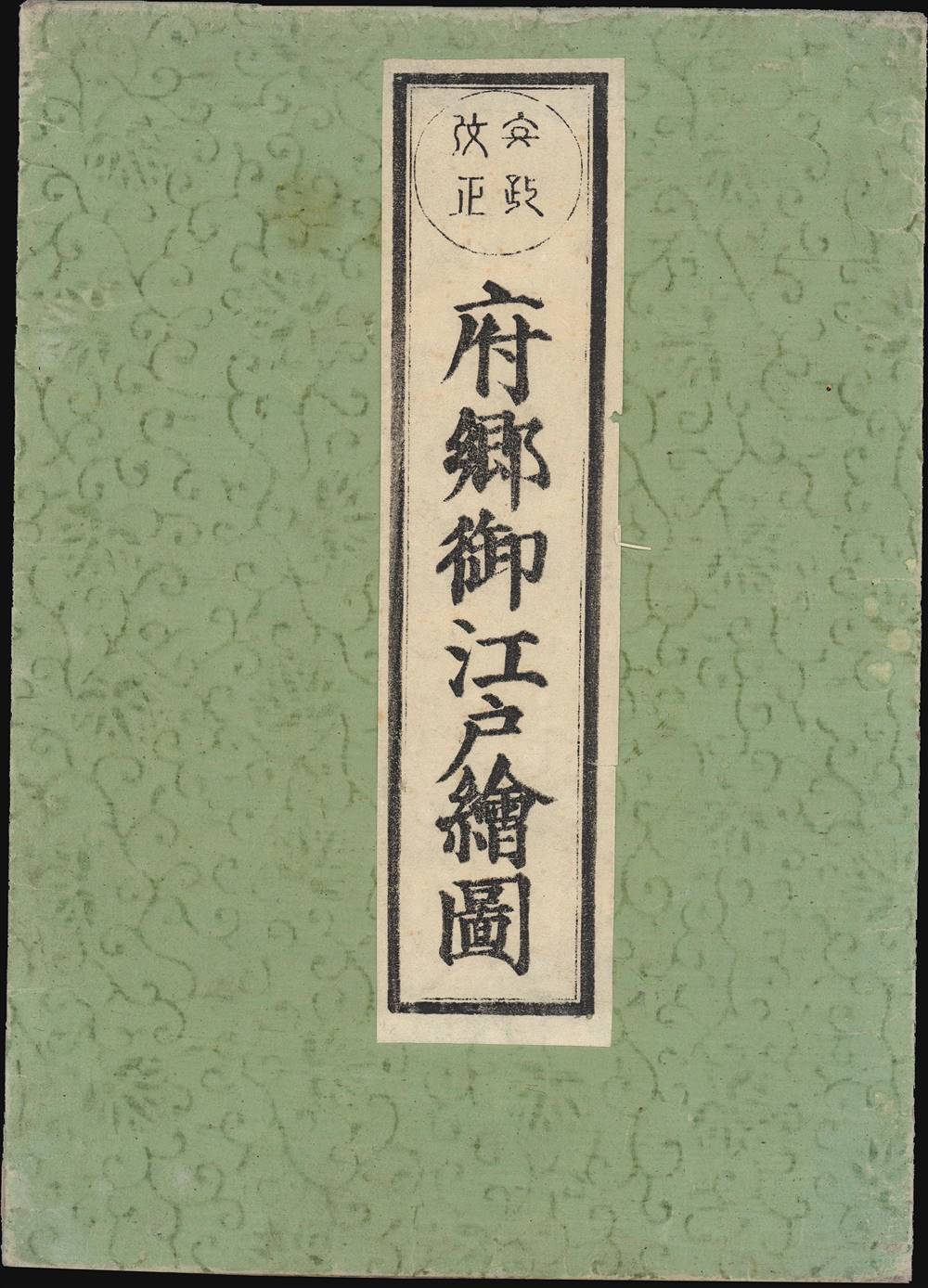 This is a large, stunning, and detailed c. 1855 Takashiba San'yū map of Edo, the capital of the Tokugawa Shogunate. It shows the sprawling urban center of Edo and its environs on the eve of dramatic changes that would unsettle Japanese society and lead to the 1868 downfall of the Tokugawa.

This map is oriented with west at top and north at right, with the Edo Castle (御城) at center. The table at bottom-left shows the distance of various neighborhoods from Nihonbashi (日本橋), in front of (east) of Edo Castle, the traditional 'center' of Tokyo and terminus of the Tōkaidō. A brief legend keys various symbols to administrative units, Shinto shrines, Buddhist temples, and famous sites throughout the city.

The map is very detailed, labeling and presenting information about different neighborhoods down to individual city blocks. The residences of the Shogun's relatives and other prominent daimyo are shaded green with tiny trees. Most such were turned over to public use during Meiji era and eventually made into public parks.

In the second half of the 16th century, Japan underwent a process of unification that was strongly influenced by exchanges with the outside world, including by way of Japanese settlers in Southeast Asia. The Tokugawa briefly continued some of these practices (such as the 'red seal ships') but were concerned about the problems that these exchanges presented (namely Christianity and guns for wayward daimyo) and nominally closed off Japan from the outside world on pain of death (known as the Sakoku Policy). Nonetheless, outside influences continued to come into Japan, primarily through Nagasaki, where Dutch and Chinese traders were allowed to reside. Moreover, foreign vessels landed on Japan's shores (and were usually attacked) with increasing frequency in the 18th and early 19th-century. Several visitors came to Nagasaki from other countries over the years, so that Japanese intellectuals had an awareness of changes taking place in maritime technology, cartography, hydrography and other fields.

Still, this steady drip of outside information was not enough for the Tokugawa to realize the rapidly emerging threat of foreign invasion, which only became clear with the arrival of American 'black ships' in 1853. The exact date of this map is difficult to determine with certainty, but it is labeled as belonging to the Ansei period, when the full impact of foreign influences, which would eventually bring down the Tokugawa, were first being felt.

Working with limited materials and under strict censorship, Japanese cartographers were still able to produce highly accurate maps of Japan, East Asia, and the world using a combination of novel surveying techniques, Chinese maps, European maps, and travelogues. There was a significant market for these maps in the Tokugawa period. They were able to produce remarkably accurate maps that often incorporated recent innovations in cartography, geodesy, and navigation developed in Europe.

The benefits of national unification, the end of incessant warfare, and the adaptation of outside influences to the Japanese context, allowed for a virtuous cycle of prosperity under the Tokugawa. Edo, Osaka, and other cities flourished. The population of Edo likely reached one million in the early 18th century, making it one of the largest cities in the world at the time. The urban economy was buoyed by elaborate, commercialized service industries ranging from restaurants, publishing, and entertainment (sumo, kabuki) to prostitution. The heady atmosphere of major Japanese cities, especially Yoshiwara, Edo's red-light district, became known as the 'floating world,' and woodblock prints depicting this vibrant social sphere (Ukiyo-e) became coveted in their own right.

It is important to note that this world of entertainment and pleasure was only available to the elite of Edo society, composed mainly of daimyo and samurai. The residences of this class, along with temples and shrines, occupied the vast majority of the urban space of Edo, while the much larger population of commoners (shomin, 庶民) and outcastes (eta 穢多 and hinin 非人, later known as burakumin 部落民) lived in tightly packed gated-off neighborhoods (machi 町) and villages of thatched cottages on the outskirts of the city, respectively.

Takashiba's map bears a strong resemblance to a contemporary map (titled 萬世御江戶繪圖) by Yorozuya Shōsuke (萬屋庄助), Fujiya Kichizō (藤屋吉藏), and Yamashiroya Masakichi (山城屋政吉, possibly a relative of Yamazakiya Seishichi), also among our listings (https://www.geographicus.com/P/AntiqueMap/edotokyo-totoshosuke-1850). Given the multiple editions and vague dating of both maps, it is difficult to determine which came first. Suharaya Mohē and Okadaya Kashichi are also listed as the makers of a nearly identical map (文政改正御江戸大繪圖: 全), with editions ranging from the late Bunsei and late Ansei eras (late 1820s - 1860), themselves derived from older maps (titled 御江戸大繪圖) dating to the late 17th and 18th centuries, which are the common ancestors to all the above-mentioned 19th-century maps.

Takashiba San'yū (高柴三雄; fl. c. 1848 - 1879) was an Edo (alter Tokyo)-based cartographer who primarily made maps of his hometown but also contributed an updated and more accurate map of Japan in the late 1840s (大日本国郡輿地全図). Learn More...


Suharaya Mohē (須原屋茂兵衞; c. 1684 - 1904) was a prominent publishing house and book wholesaler (書物問屋) of the Edo and Meiji periods known for publishing works related to Edo, including maps. The publishing house is likely named for its founder, whose name was used long after his death. Among the best-known publishers in the family lineage were Suharaya Ichibei (須原屋市兵衛; fl. c. 1762 - 1802) and Suharaya Sasuke (須原屋佐助; fl. c. 1795 - 1840). Learn More...


Okadaya Kashichi (岡田屋嘉七; fl. c. 1658 - 1874) was a prominent Tokyo-based publishing house that produced works in a wide variety of fields, including songs, maps, and books on Nichiren Buddhism. As was conventional for the Edo period, the publishing house is likely named for its founder, whose name continued to be used after his death. Learn More...