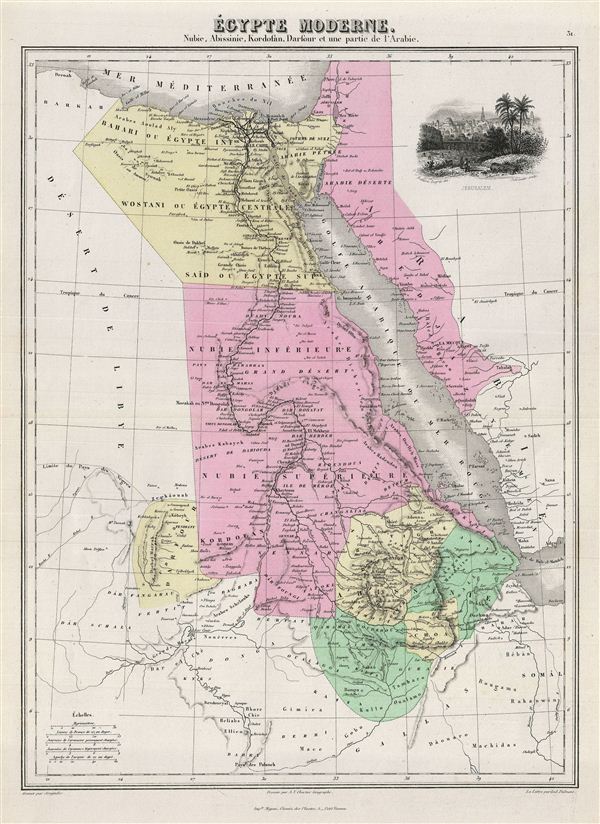 This is a fine example of J. Migeon's 1878 map of egypt. The map covers egypt, Nubia and Abyssinia (ethiopia), Kordofan and Darfour (parts of Sudan), as well as part of Arabia. The upper right quadrant contains a beautiful decorative illustration of Jerusalem.

The map follows the 1798 expulsion of the Napoleonic forces from egypt by the Ottoman Mamluk Turks. Muhammad Ali, the Ottoman commander who was named viceroy of egypt established the Mamluk dynasty that would rule egypt until the egyptian Revolution of 1952. Between 1820 and 1833, Ali annexed northern Sudan, Syria and parts of Arabia into the Mamluk empire. In 1848 Abbas I, his grandson, was ruler of egypt and Sudan. Abbas I, who spent most of his time in seclusion, on the insistence of the British government, was responsible for the construction of the railway from Alexandria to Cairo.

Migeon identifies various rivers, deserts, mountain passes and other topographical features . Migeon's Geographie Universelle, published in Paris, is one of the last great decorative atlases of the 19th century. It contains many stylistic elements of early 19th century cartography such as full hand coloring, numerous decorative vignettes, and high quality paper. This map was issued as plate no. 31 in Migeon's Geographie Universelle.