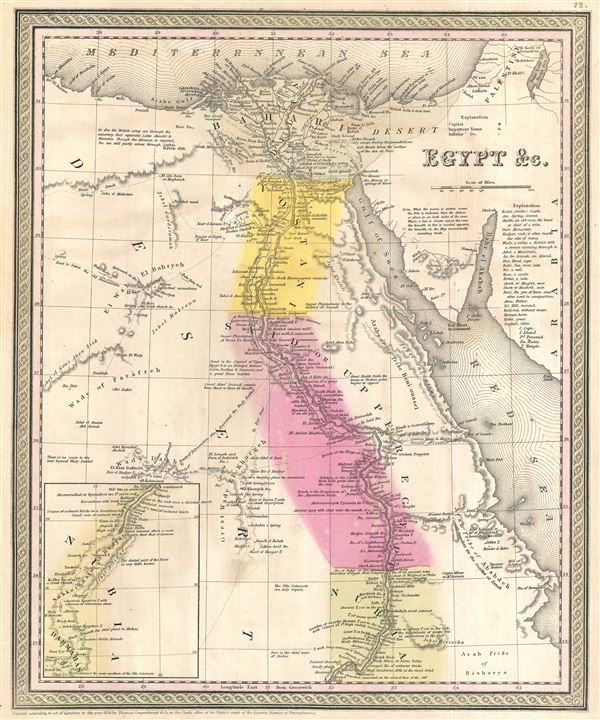 A fine example of Thomas Cowperthwait and S. A. MitchellÂ's 1854 map of Egypt. Centered on the Nile Valley, MitchellÂ's map covers all of Egypt from the Mediterranean to Nubia, as well as the adjacent Sinai, and parts of the Red Sea and Palestine. Below the title area in the upper right quadrant there are translations of some of the Arabic terms used to describe geographical features. An inset in the lower left continues the course of the Nile as it comes through the speculative only partially explored Nubia. The sites of numerous ancient ruins and monuments are noted as are contemporary cities. The whole is engraved in MitchellÂ's distinctive style with green border work and vivid pastels. Political and topographical features are noted and color coded with elevation rendered by hachure.

This map was prepared by S. A. Mitchell for publication by the Philadelphia firm of Thomas Cowperthwait & Co. as plate no. 72 in the 1854 edition of MitchellÂ's New General Atlas. Dated and copyrighted, 'Entered according to act of Congress in the year 1850 by Thomas Cowperthwait & Co. in the Clerk's office of the Eastern District of Pennsylvania.'